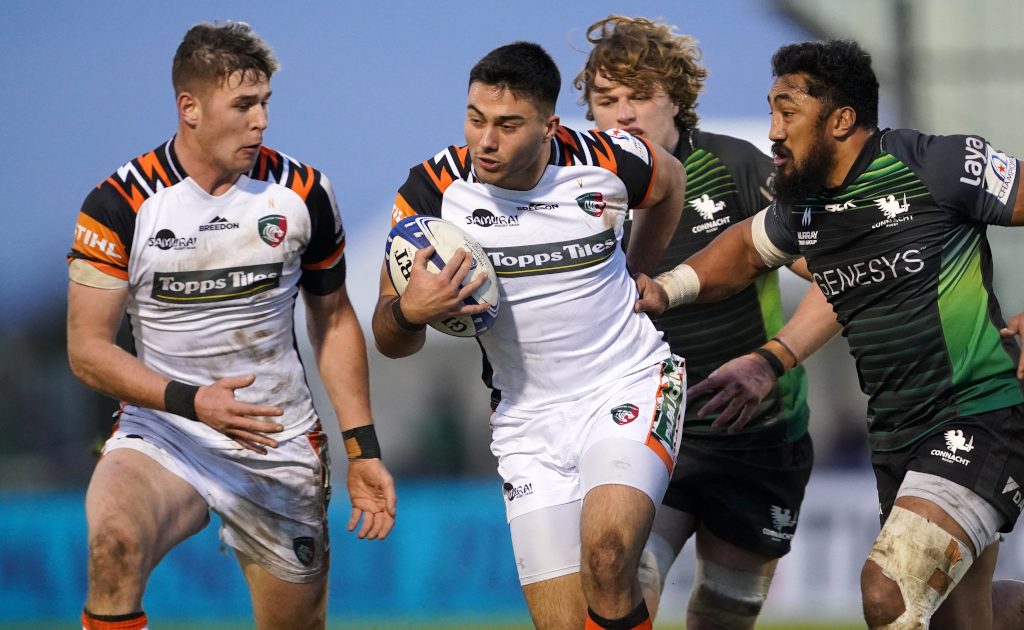 Leicester Tigers launched a dramatic late comeback to beat Connacht in their Champions Cup clash at the Sportsground on Saturday.

An 80th minute try from Hosea Saumaki helped the Premiership pace-setters to the result as they came from behind in the closing stages of a frantic game.

There were nine tries on the day with the fixture ending in a chorus of boos from the Connacht supporters, but replays showed replacement wing Saumaki did not have a foot in touch as he put Tigers through to the knockout rounds of the competition.

An early Leicester surge, which saw Joe Heyes and Kini Murimurivalu both touch down, was eclipsed when Connacht hit back to lead 14-10 at half-time.

Captain Jack Carty converted scores from Tiernan O’Halloran and Cian Prendergast, and Tommy Reffell’s early second-half yellow card was punished by seven-pointers from Kieran Marmion and O’Halloran for a 28-10 scoreline.

However, the Premiership leaders rallied superbly, completing a pool double over the stunned westerners thanks to closing tries from Murimurivalu and the newly-introduced Charlie Clare and Saumaki.

A dominant start had Tigers 10 points up in as many minutes, their robust set-piece play setting the tone. They went close from a maul before prop Heyes plunged over in the second minute.

The visitors struck again when Freddie Burns used scrum possession to kick out wide for Fijian Murimurivalu to crash over past O’Halloran.

However, Burns missed both conversions and Connacht, who had a penalty miss from Carty, suddenly burst into life on the quarter-hour mark. A good forwards drive took them into the 22 and Murimurivalu was exposed in midfield as Matt Healy sent full-back O’Halloran in beside the posts.

The home side’s persistence paid off in the 27th minute, a brilliant Bundee Aki offload putting Prendergast over and Carty converting.

Having absorbed some late Leicester pressure before the break, Connacht were quickest out of the blocks on the restart.

Flanker Reffell was sin-binned for offside before Marmion wriggled over from close range, Carty making it 21-10.

Nonetheless, once back to their full complement, Tigers clawed it back to 28-17 thanks to a hard-earned Murimurivalu effort, the attack sparked by a Wiese turnover. Burns added a terrific conversion.

Connacht scrambled well to hold up both Reffell and Ellis Genge but Tigers, stung by losing their unbeaten record to Wasps last Sunday, had more in the tank.

Having been previously penalised for obstruction at a maul, they got it just right to propel hooker Clare over in the 71st minute with Burns also converting.

That gave Steve Borthwick’s men their bonus points but they ended up with the maximum haul as Dan Kelly’s long pass exposed a tiring defence and Saumaki finished well in the left corner.

Racing 92 qualified for the quarter-finals of the Champions Cup with a hard-fought 25-10 victory over Ospreys in a game played behind closed doors in Swansea.

It took some time for the French side to quell their spirited opponents but Ospreys’ defeat leaves them pointless after three games, with their remaining fixture a difficult one at Sale.

Their only try came from Keiran Williams, with Gareth Anscombe kicking a penalty and a conversion to give the Welsh side a 10-8 half-time lead.

But Racing 92 took charge in the second period, with Teddy Thomas and Virimi Vakatawa touching down, Antoine Gibert converting both and Finn Russell adding a penalty. Julian Imhoff’s try and a Maxime Machenaud penalty had come in the first half.

Baubigny was only stopped by a high tackle from Alex Cuthbert, which earned the Ospreys wing a yellow card with Machenaud kicking the resulting penalty.

Down to 14, Ospreys were placed under considerable pressure and conceded five penalties in the opening 12 minutes.

But Cuthbert was able to return with no further damage done to the scoreboard with Machenaud’s penalty the only score of the opening quarter.

With their first attack of the game, Ospreys scored the opening try when Williams forced his way over with Anscombe on-target with the conversion and a subsequent penalty to make it 10-3.

The French response was quick. They flung the ball wide to provide space for Thomas, who twice kicked ahead for Imhoff to win the race to touchdown. Machenaud missed the conversion to leave his side trailing at the interval.

Ten minutes into the second half, Ospreys flanker Will Griffiths became the second home player to be sin-binned, this time for a deliberate knock-on.

The shorthanded hosts had the next chance for points but Anscombe was short with a penalty from the half-way line.

One of the biggest problems for the Welsh region was the malfunction of their line-out and it was instrumental in them losing the lead.

A line-out throw on halfway went astray for Russell and Gael Fickou combined to send Vakatawa in under the posts.

Griffiths returned with his side still in contention but 13 minutes from time Russell fired over a long-distance penalty to give Racing some breathing space.