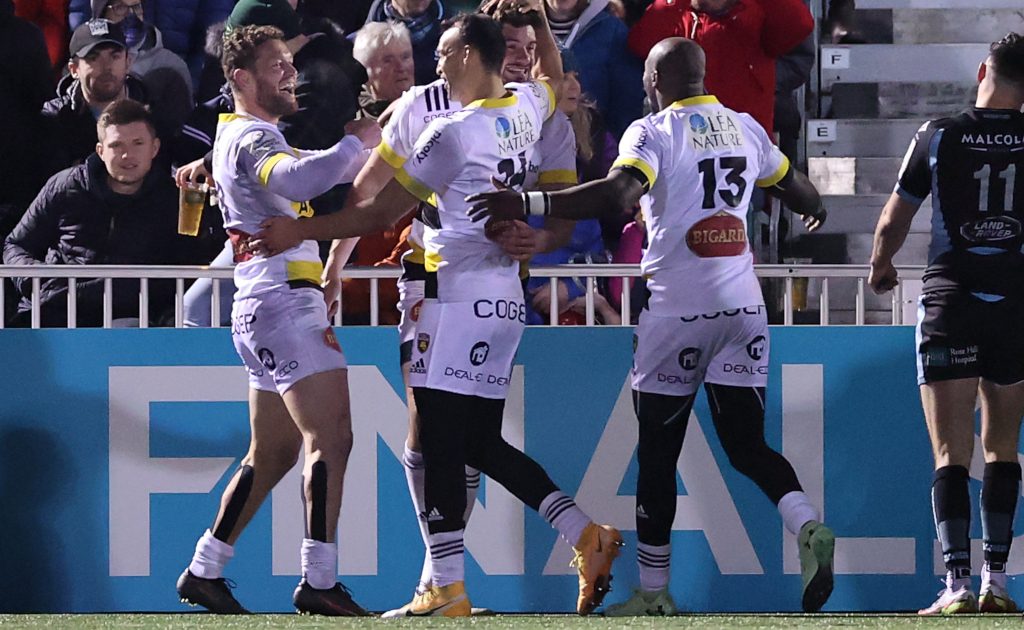 Glasgow Warriors will have to wait until Sunday to see whether they have qualified for the knockout stages of the Champions Cup after a disappointing 38-30 defeat to La Rochelle.

Following Clermont Auvergne’s defeat to Ulster, a win would have confirmed the Warriors’ passage into the last-16, but they produced a disappointing display.

Danny Wilson’s men struggled to deal with the power of the Frenchmen, who went into the break 15-9 ahead thanks to tries from Raymond Rhule and Paul Bourdehent – the Scottish outfit responding via three Ross Thompson penalties.

Despite the difference in physicality, Glasgow initially started the second period well as Josh McKay’s converted try moved them in front, but their failings came back to haunt them as Pierre Bourgarit charged across the whitewash.

The Warriors then gifted La Rochelle the bonus-point as Pierre Boudehent went over to seal the home side’s fate, despite Ollie Smith’s late brace.

La Rochelle dominated from the start and Warriors were reduced to 14 men after just five minutes when Fraser Brown was yellow carded for dropping a maul.

Somehow the home side survived the early onslaught, though, and took the lead against the run of play through a Thompson penalty.

But Scott Cummings was penalised for going off his feet straight from the restart and that allowed Pierre Popelin to square it with 10 minutes played.

La Rochelle continued to dominate and Glasgow did well to keep their line intact during the remainder of that period with a man less.

Eventually the pressure told, with Rhule reaching out of a tackle from Sam Johnson and dotting down, before Popelin nailed the tricky touchline conversion for good measure.

Warriors managed to make it into La Rochelle territory for only the second time in the match after 25 minutes and once again they took something from it when Thompson slotted another penalty.

Then, with 32 minutes played, Thompson reduced the gap to a single point when Romain Sazy was penalised for being in front of the kicker.

It looked like Warriors were going to finish the half with a flourish when McKay broke up the right, but he stepped inside instead of feeding Kyle Steyn on his outside and a dropped ball a few phases later allowed La Rochelle to clear down field.

And when Paul Boudehent muscled over in the last play of the first period it gave the visitors a 15-9 lead at the break.

Warriors bounced back brilliantly in the opening minute of the second half, with Thompson jinking through a gap then sending McKay in for a fine try, and the fly-half’s conversion put the hosts in front.

But Warriors then imploded, coughing up 20 points inside five minutes through tries for Bougarit and Pierre Boudehent, plus two conversions and two penalties from Popelin.

That made the gap an insurmountable 19 points with half an hour still to play.

Two late tries from replacement full-back Smith were not enough to secure a bonus-point for the home side and Ihaia West scored a late penalty to round off a convincing win for La Rochelle.