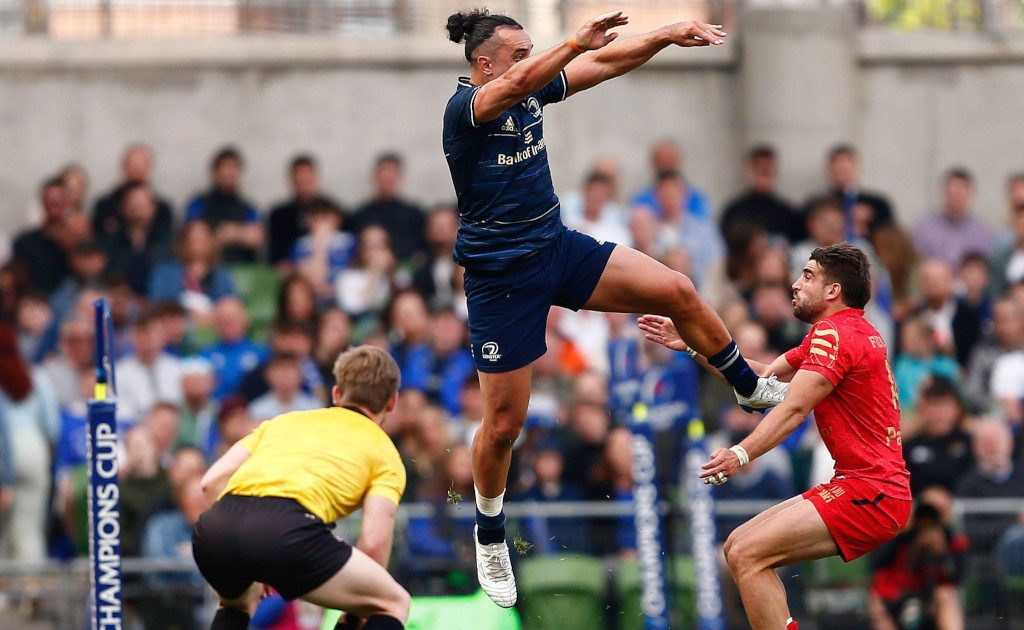 Following a 40-17 victory for Leinster over Toulouse in their Champions Cup semi-final, here’s our five takeaways from the match at the Aviva Stadium on Saturday.

In terms of semi-final wins this was a thrashing, as four-time winners Leinster deposed of five-time champions Toulouse by 40-17 in a cauldron of noise, heat and colour at Dublin’s Aviva Stadium.

Rocked by a brilliant solo try by Antoine Dupont in the opening moments, Leinster simply dusted themselves down and produced a masterclass of attacking and pacey rugby as the evergreen Johnny Sexton controlled everything in the fly-half berth.

At half-time, Toulouse were just about in touching distance as they went into the break 23-10 down, but with one man off the field. With Tadhg Furlong straining ankle ligaments and with the Toulouse scrum very much in ascendency, there was a glimmer of hope for the visitors until James Lowe rolled over the line for the second time to take Leinster into comfort and into the final itself.

It was a display from Leinster of the highest class, a blueprint produced by Stuart Lancaster and Leo Cullen, engineered by Sexton, built by a pack of fantastically skilled forwards and energised by some electric backs, notably Robbie Henshaw and Lowe.

Everything Leinster did was executed at electric pace. Whether it be carries, harries or breakdown work, speed was the hallmark of their game. At ruck time, the ability of the players to get in support and clear the ruck or take a pop pass made defending almost futile. They were consistently delivering sub two second ruck retention, outrageous considering they were up against five starting French Grand Slammers.

Compare this to the sluggish and isolated running of the Toulouse carriers, who time and time again ran into contact and then struggled to present the ball due to the slowness of their own support. You can rightly conclude that it was the speed of ruck that allowed Leinster so much freedom with which to run.

The pace wasn’t limited to attack; the speed of the Leinster defensive blitz, led brilliantly by Josh van der Flier and Henshaw, suffocated a Toulouse side that looked jaded and sluggish, possibly as a result of their 100 minutes against Munster last weekend.

Whilst Sexton was awarded Star of the Match, Lowe couldn’t be that far behind.

In a season where he’s cemented himself as Ireland’s first choice on the wing and, at times, has looked something approaching world-class, his workrate and all-round footballing skills were an absolute point of difference between the teams.

His appetite to pop up everywhere knows no bounds and it’s that relentless commitment to his team’s cause that singles him out. Safe as houses under the high ball, tireless in chase, he is one of those players that make others around him succeed.

Today, we saw another facet of his development as time and time again his siege-gun left boot saw employment in defence, in clearance and also in attack, making some enormous metres down the left touchline.

Lowe has been outstanding all season for both Ireland and Leinster, but today he went up yet another gear in terms of his personal development and his contribution to his team.

Romain Ntamack might be able to tear defences apart from time to time but ask him to manage a close game of rugby in the manner of Sexton and you’ll be disappointed.

There’s a reason why he’s never quite been a fixture in the French 10 jersey and today we saw why. When faced with a defence of the pace and intellect of Leinster, his armoury is somewhat bare and he resorts to standing too deep, and offloading ill-judged passes for his team-mates to take the contact that he refuses to take himself. In terms of game management and intellect, Sexton was playing rugby at a different level today.

At nine, Dupont might be world-class, but he’s not God yet. Although he tried manfully to get his team going forward, Jamison Gibson-Park’s sheer pace around the fringes hassled and harried the great Frenchman all day long. Whilst the scrum-half battle may have been closer, the fly-half duel was as wide as the Irish Sea that Toulouse will cross on their way out of the 2022 Champions Cup.

For Toulouse, this was a tough game in which to judge them. The extra 20 minutes they played last weekend clearly had an impact on their energy levels and they simply had nowhere near the pace and alacrity of their hosts. At scrum time, Cyril Baille and his mates wreaked havoc, with Andrew Porter struggling greatly against both of his opponents. But on the flip side, their line-out, despite five Test quality jumpers, was simply dismantled by James Ryan and Ross Molony, who surprised all with their level of dominance.

Toulouse look short of gas in attack and lacked the ability to break free of the defensive shackles of Leinster. It’s safe to conclude that right now, they’re in something of a rebuilding phase and it’s pretty clear to see what needs fixing.

Leinster will play to become a ‘Five Star Club’ in Europe in two weeks’ time. With the brand of rugby they’re playing, the quality within every unit of their team and with the momentum they have, they look something near unstoppable.

Above all, their style and their willingness to play at pace is a delight to watch: loved by their fans, admired by the neutral and respected by their opponents. Make no mistake about it, this is a Test quality team and today, they played Test quality rugby.