Home Champions Cup Champions Cup: Five key battles to watch ahead of the final between Leinster and La Rochelle 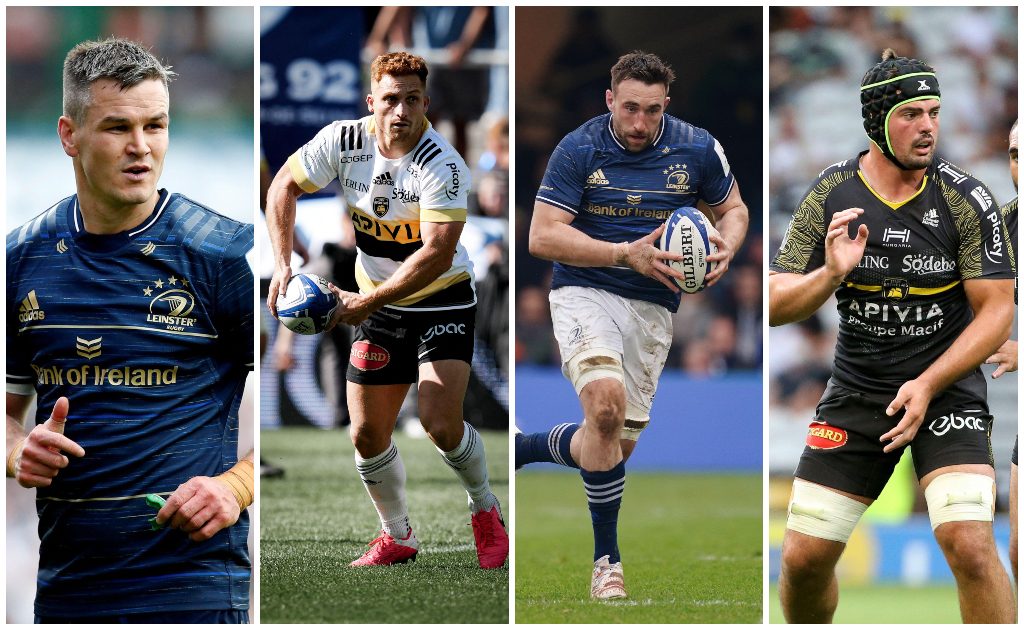 Four-time winners Leinster take on the 2021 runners-up La Rochelle as the two teams face off in the 2022 Champions Cup in Marseille on Saturday.

The Irish province have swept all before them, picking up impressively dominant victories over Leicester and Toulouse in the quarter and semi-finals respectively.

Leo Cullen’s men will, however, come up against a team that have found their form. La Rochelle contain a monster pack and plenty of talent behind the scrum, which should present a stern challenge for the favourites.

Here are the main battles we think will determine the outcome of the match.

Porter’s and Leinster’s set-piece issues have been well-documented, having struggled in their Champions Cup knockout matches against Leicester Tigers and Toulouse. They may also be without world-class tighthead Tadhg Furlong, who picked up a calf injury in that victory over Le Rouge et Noir, which puts extra onus on Porter.

The loosehead has admitted he hasn’t been at his best in the scrum over recent weeks and he faces probably the biggest tighthead in the world this weekend. Atonio is not the most technically adept but he is an absolute powerhouse and the France international will destroy the Leinsterman should the Ireland player continue to have problems with his technique.

The British and Irish Lion is probably the most underrated number eight in Europe and remains a key cog in a mightily impressive pack, but he now faces probably the best back-row in the world at the moment. Alldritt was magnificent during the Six Nations and has taken that form into the Top 14 and Champions Cup, playing a crucial role in their play-off surge and, of course, their run to the final of the continent’s top-tier tournament.

Conan will operate in the wider channels, using his pace, footwork and skill-set to try and create space, while Alldritt will play slightly closer to the ruck. The La Rochelle man has the power to be direct but also the ability to get his hands free and off-load. Leinster will equally have to be wary of the Frenchman when he doesn’t have the ball as he is a big threat at the breakdown.

La Rochelle are sweating on the availability of Kerr-Barlow, who suffered a broken hand in the semi-final victory over Racing 92. Ronan O’Gara last week ruled him out of this clash but they are still trying to do everything they can to get him ready, which shows how important he is to the French outfit. If the former New Zealand international is not available then the inexperienced Berjon will take the reins.

Whoever it is, they will go head-to-head with a man in form in the shape of the excellent Ireland scrum-half Gibson-Park. Admittedly, the 30-year-old has been getting an easy ride from his outstanding Leinster pack, but he still has to make the right decisions and do so at pace. The New Zealand-born half-back has made a very difficult job look effortless, delivering a constant stream of quick ball for Johnny Sexton to work with.

Talking of Sexton, his battle with La Rochelle’s primary playmaker is the next duel to look at. It is arguably one position where Leinster really do have a significant advantage, with the Ireland legend’s big-game temperament not in doubt. It wasn’t that long ago when some were questioning whether the 36-year-old had what it takes to remain at the top level, but he has looked reinvigorated since being left out of the Lions squad.

Sexton has controlled the game – for both province and country – beautifully this season and it will be a tough job for West to match his brilliance. The La Rochelle man is a talent but has often faltered under pressure in the biggest matches, including last year’s Champions Cup showpiece event where he missed two penalty attempts in the 22-17 defeat to Toulouse. He also struggled in the 2021 Top 14 final and was poor off the tee in the recent semi-final triumph over Racing 92. West quite frankly needs to be faultless if O’Gara’s men are to stand a chance.

These two unfortunately didn’t go head-to-head in this year’s Six Nations so this will be a particularly fascinating battle. Danty has always been a talent due to his incredible physical traits, but he has improved his decision-making, defence and technical aspects so much over the past 18 months. The 29-year-old was excellent in France’s Grand Slam triumph, both in terms of his gain line presence and his breakdown work, where he made numerous turnovers.

As for Henshaw, he rarely has a bad game and was comfortably Ireland’s best player in the 2021 Six Nations. The centre has since endured some injury troubles and was overtaken by Bundee Aki for the recent annual international tournament. He did, however, always make an impression off the bench and has been excellent for Leinster since that competition ended. Henshaw is one of the sport’s best defenders, constantly carries for the whole 80 minutes and regularly punches holes in the midfield, but he is also a very smart operator. His relationship with Sexton and Garry Ringrose could be crucial.