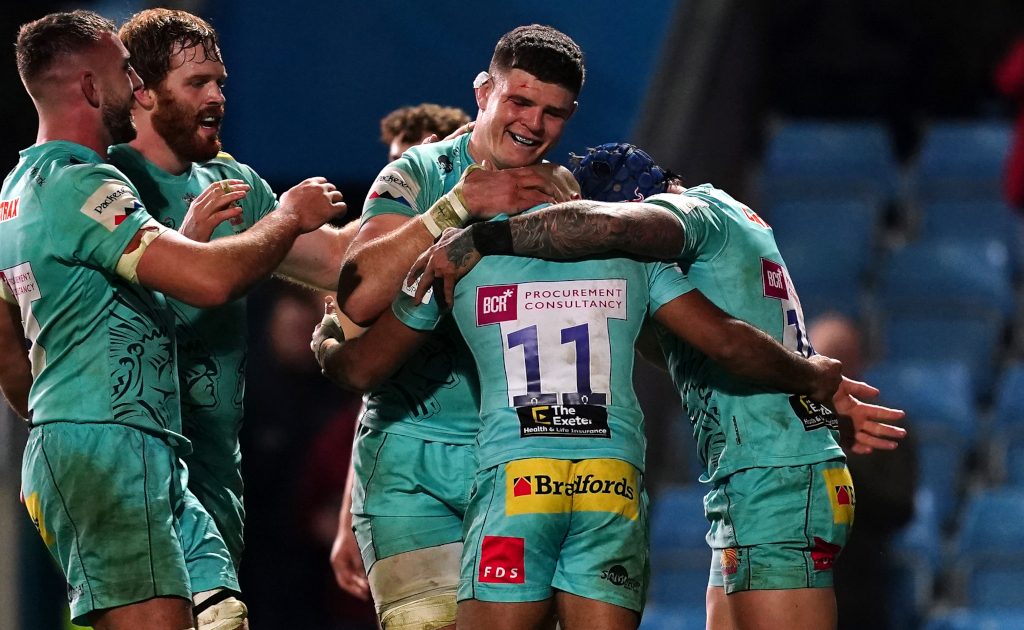 Exeter Chiefs arguably produced their best performance of the season as they thrashed Glasgow Warriors 52-17 and got their Champions Cup campaign back on track.

The Scottish outfit produced a superb effort to defeat Exeter 22-7 in the reverse fixture but, despite a tight first half at Sandy Park, they failed to repeat that feat.

In fact, the Warriors were comprehensively outplayed in the second period as a Tom O’Flaherty hat-trick, a Sam Simmonds brace and further tries from Luke Cowan-Dickie, Jack Nowell and Dave Ewers secured a dominant win for the hosts.

Glasgow, who now face a crunch clash against La Rochelle in their final pool game next weekend, posted tries through lock Kiran McDonald and flanker Matt Fagerson, both converted by Ross Thompson.

But they had no answer to Exeter’s pace and power once the Chiefs clicked into gear.

Glasgow head coach Danny Wilson made a solitary switch to his starting line-up, recalling number eight Jack Dempsey as the teams met for a ninth time in European competition.

Level on points with Exeter before the game in Pool A, Glasgow made strong early running and were rewarded when Thompson kicked a sixth-minute penalty.

Exeter’s first attacking opportunity came from a five-metre lineout, but Glasgow’s defensive structure was up to the task, only for them to be undone by a high-class Chiefs try.

The home forwards patiently went through phase-play and when space opened up they cashed in as O’Flaherty appeared in midfield and applied a clinical finish, with Simmonds’ conversion putting Exeter 7-3 ahead.

Exeter now had momentum, and they struck again five minutes later – this time from a close-range lineout – as Sam Simmonds touched down and his brother added the extras.

Glasgow needed to regroup in the face of Chiefs’ onslaught and they responded impressively, setting up strong foundations inside Exeter’s 22 before McDonald breached the home defence from close range.

Thompson kicked the conversion as Glasgow put themselves back in contention, trailing 14-10 at the interval.

And they regained the lead just four minutes into the second period, courtesy of more impressive work by flanker Rory Darge that set up an attacking opportunity.

McDonald featured prominently and it was Fagerson who finished off following sustained pressure, with Thompson’s conversion putting Glasgow three points in front.

But the lead lasted only four minutes as Exeter’s forwards stirred once more, generating quality possession that set up Simmonds for his second try.

And before Glasgow could recover from that setback, Exeter hit them again, claiming a bonus-point after Joe Simmonds’ kick was gathered by an unmarked O’Flaherty, who had a simple finish.

Simmonds converted, leaving Glasgow 11 points behind for a second time as the game moved into its final quarter.

There was more to come from Exeter and Cowan-Dickie pounced for their fifth try that completed a spectacular scoring blitz of 19 points in eight minutes.

Glasgow had nothing left in the tank and there were further scores for O’Flaherty, Nowell and Ewers, with Slade adding two conversions as Exeter brought up a half-century, scoring 38 of those points during the second period.

Remi Picquette scored a brace of tries as La Rochelle recorded a thumping 39-21 victory over Bath at the Stade Marcel-Deflandre to record their second victory in the Champions Cup.

Despite a bright start from the visitors, the result was never in doubt from the moment Pierre Popelin registered a couple of early penalties, after Ben Spencer had failed to give Bath an early lead from the tee.

The penalties were followed by a first try courtesy of Jonathan Danty. The powerful centre flew over after collecting a pass from fellow back Raymond Rhule.

The home side were starting to dominate proceedings and crossed for a second try through forward Picquette. The lock smashed his way over from close range, with Popelin converting both scores.

La Rochelle were in danger of running away with it at this point and only an excellent piece of defence from Josh Bayliss prevented opposite number Gregory Alldritt from adding a third score just before the half-hour mark.

Bath ended the half on the front foot and they drew a number of penalties from the hosts and will have felt harshly done by that the referee did not reach for his pocket, with La Rochelle being pinged so often.

The pressure ultimately proved fruitless as they failed to trouble the scoreboard.

The second half began in the worst possible fashion for the Premiership side, with Tom Ellis sent to the sin bin. La Rochelle made Bath pay almost instantly, with Picquette blasting his way over for his second try just five minutes after the break.

At this point, the bonus point try was just a matter of time away and it arrived through Dillyn Leyds.

The winger touched down after collecting a pass over the top, after La Rochelle had made their physicality felt.#

It was followed by a fifth score courtesy of Rhule as the winger collected an inside pass from the galloping Brice Dulin, as the French side extended their score to 39-0.

Johannes Jonker, Joe Simpson and Ruaridh McConnochie all crossed for the visitors as they reduced the deficit to a more respectable 18 points and played some lovely rugby in the process.

As the game entered its final throes, Bath lost their second player to the bin with Jonker pinged at scrum time.

The hosts thought they had finished the game with a sixth score, but the referee ruled that replacement Leo Aouf was held up over the line, following a barnstorming run.

It was a brief bright spot in what was a dour closing stage as La Rochelle seemed content to hold what they had and record a comfortable victory.