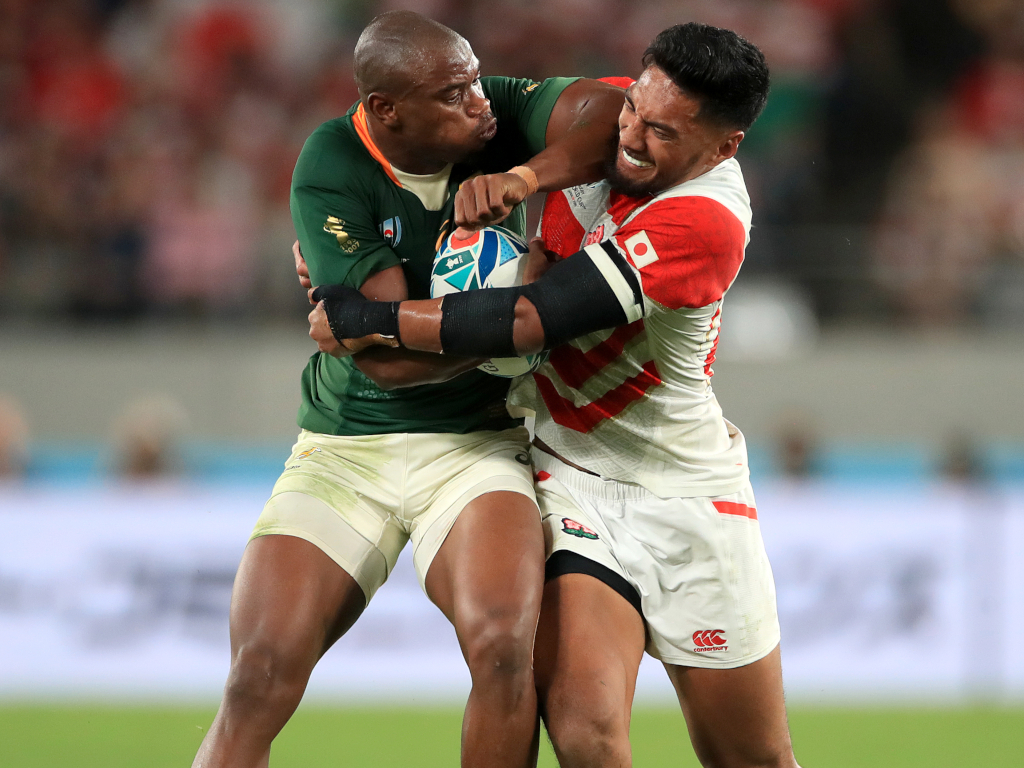 It was a thrilling first half and the opening quarter set the tone as Springbok wing Makazole Mapimpi touched down before the Brave Blossoms hit back via the accurate kicking of Yu Tamura.

The match continued at a frenetic pace but both defences held out until early in the second period when Handre Pollard added two penalties.

Pollard then scored a third off the tee before Faf de Klerk crossed the whitewash for the game-decisive try as they ended Japan’s remarkable tournament.

Mapimpi then went over for his second as Rassie Erasmus’ men completed a fine performance and eased their way into the last-four.

It is one thing dealing with the forward strength of Ireland and Scotland but another the sheer power of the Springboks and Erasmus’ charges were simply too strong in the tight exchanges.

The scrum, which has been a strength over the past year, laid a stable platform early on and De Klerk gave Mapimpi a one-on-one opportunity. With just Tamura to beat, the wing charged through the fly-half’s abysmal attempt at a tackle and touched down for a 5-0 advantage.

A dominant South African scrum sees the ball fed out wide to Mapimpi who beats the Japanese defence with some fancy footwork to finish#RWC2019 #ITVRugby #JPNvRSA pic.twitter.com/DReQP8rKqh

South Africa were unsurprisingly physical in contact but Tendai Mtawarira was perhaps too pumped up and was subsequently sin-binned for a tip-tackle on Keita Inagaki. The prop’s absence gave the Japanese an opportunity to weave their magic and Kenki Fukuoka brilliantly stood up Cheslin Kolbe, running deep into opposition territory.

Although that move eventually broke down, they were rewarded for their endeavour by Tamura, who reduced the arrears from the tee.

Following that score, Japan continued to move the ball and stress the Springbok rearguard but their defence remained stout, giving them them a two-point lead heading into the latter stages of the half.

The South Africans were under pressure but they began to reassert their authority. Erasmus’ men were dominant at the set-piece and, although Damian de Allende was denied a try at the end of the first period, they kept their foot on the Japanese throat.

Their scrum was giving them plenty of purchase and successive three-pointers from Pollard opened the gap beyond a converted try.

Surprisingly, the pivot was off-target with a third attempt, but he did not make the same mistake as the game reached the final quarter.

South Africa were in control and they started to bully their opponents. The maul was hugely impressive and, after a drive had gone 30 metres, Malcolm Marx pealed off the back and fed De Klerk to break Japanese hearts.

Japan had run out of ideas and, following yet another turnover, Willie le Roux found flyer Mapimpi, who sped down the left and touched down as the Springboks deservedly qualified for the semi-finals.