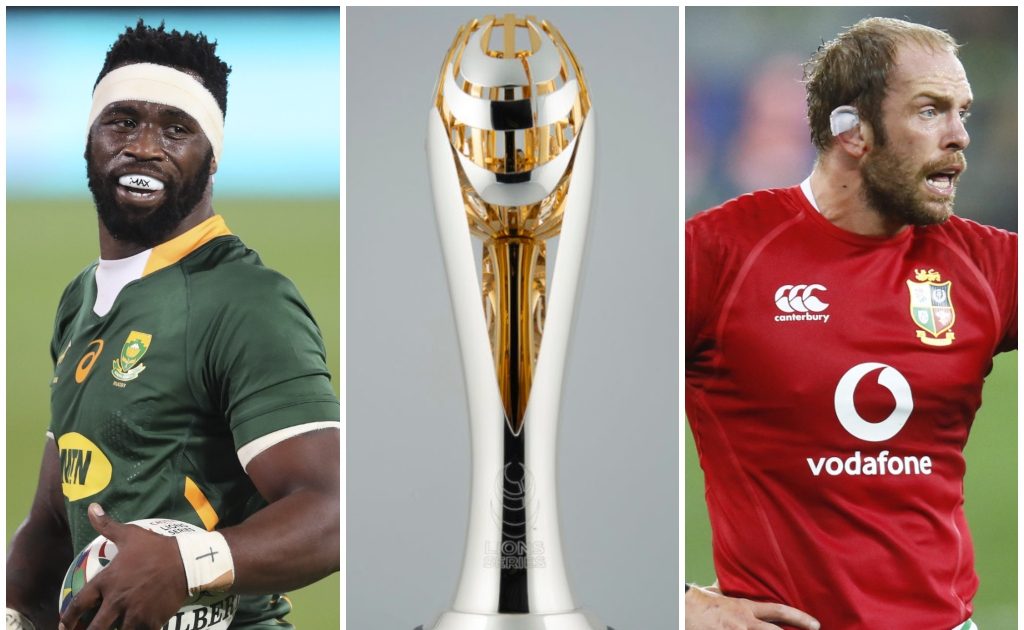 After all the talk, the controversy, the warm-up games and the Covid-19 disruptions, attention can now finally turn to this weekend and the first Test between South Africa and the British and Irish Lions.

It is fair to say that it has been a fraught tour, with the pandemic putting the series in doubt over the past year, but it is a credit to both camps that they have got to this stage ready to go and in reasonable shape.

The Springboks have no doubt been the hardest hit following the past 18 months, with their game against Georgia the team’s only Test match since the 2019 World Cup.

A number of their first choice players did get a handy hit-out versus the Lions as part of the ‘A’ side but there are individuals involved this weekend that were unable to take part in that encounter due to coronavirus.

They include captain Siya Kolisi, fly-half Handre Pollard and wing Makazole Mapimpi, which means the hosts may well be undercooked heading into the opening Test.

That clash will have also benefited the tourists, who have got a taste of the type of physicality and intensity that awaits after easy matches against the weakened South African franchises.

As a result, Warren Gatland has resisted the temptation of playing Tom Curry and Hamish Watson together in the back-row, knowing that they need the hybrid flanker to combat the brilliant Pieter-Steph du Toit.

Up front, despite a brilliant couple of cameos from Mako Vunipola, they can’t afford to have lapses in the set-piece, which means the more reliable scrummager Rory Sutherland is preferred on the bench.

There are some interesting calls from the coaches, with Duhan van der Merwe getting the nod over Josh Adams and Jack Conan taking the spot at number eight ahead of Gatland favourite Taulupe Faletau, but it appears a strong and balanced squad.

In 2009, Gatland was part of the backroom team that got the selection so badly wrong in the first game and this side both counters the South African strengths but also adds the Lions’ own imprint.

The first Test is always hugely important and, judging by the tight clash between South Africa ‘A’ and the Lions, it will be a closely-fought series.

South Africa had just sewn up a series victory thanks to Morne Steyn’s famous long-range penalty with the clock in the red, but the British and Irish Lions were determined to get some reward for their efforts. They were shorn of several important individuals after a brutal second Test – still regarded as one of the most physical games ever to be played – but those that came in did a superb job. One of those to feature was 2008 IRB World Player of the Year Shane Williams, who had endured a disappointing tour when much was expected of him, but he showed his try-scoring instincts in Johannesburg.

The Lions were aided by the hosts also making several changes to their team and it was the tourists that settled the better as Williams touched down thanks to excellent work from Jamie Heaslip. A piece of Riki Flutey brilliance then allowed the Welsh wing to go in for his second before Steyn kicked his second penalty to reduce the deficit to 15-6 at the interval. The Springboks began the second period on the front foot but Ugo Monye perfectly read Wynand Olivier’s pass to sprint 80 metres and touch down to effectively seal the win. Stephen Jones would add two penalties to complete a 28-9 triumph and end a thrilling series on a positive note for the Lions.

“Why do we accept playing like that? It’s the way we’ve been brought up,” he told reporters.

“To me, it’s the most beautiful thing…apart from my wife. That’s the way we play. Throwing the ball around is nice for people watching on TV, but to me the way we play as the Springboks is a thing of beauty.”

Pollard, along with captain Siya Kolisi, were two of the players to be forced into isolation, but head coach Jacques Nienaber insists that they will be ready.

“Some of the players didn’t have COVID-19 symptoms at all, they have been managed according to their individual needs, and they have really impressed me with their intensity and enthusiasm at training,” Nienaber said.

“The well-being of our players is of paramount importance, so we have been working closely with the medical team to work out what would be the best course of action for each player over the three-Test series.”

Lions head coach Warren Gatland admitted that it was incredibly difficult to name his Test 23, stating that all the coaches had to compromise.

“I know a lot of people think it’s the team that I select, but that’s never been the way whether with the Lions or with Wales. It’s important that, as coaches, we all have an input into the make-up of the squad,” Gatland said.

“I can tell you that not one of the coaches got the 23 they came along to the meeting with, I think that’s a credit to the players – we were all thinking about different permutations and combinations and what the make-up of the 23 looked like.

“There was a long discussion and, to give you an idea, in the forward pack we had four of the same eight and in the backline we had three of the same seven between the five of us.

“It just goes to show how tough it was in terms of that selection, but it’s a great place to be because there’s so many players in the squad putting their hands up and making it difficult for us. We had a pretty tasty training session yesterday, a little bit of niggle and stuff.

“That’s exactly what we wanted, I take my hat off the guys that were helping that Test team, they really fronted up and trained exceptionally well. You couldn’t ask for more from a coaching perspective.”

There was always a feeling that Duane Vermeulen’s injury would be a huge blow to South Africa’s chances and that appears to be the case now that the team has been named. Without Vermeulen, the Springboks don’t really have too many gain line presences with ball in hand. In the pack, only Eben Etzebeth is someone Jacques Nienaber can rely upon to get them consistent front foot ball, which means there is pressure on the others to contribute. Kwagga Smith is an incredible athlete who can thrive in the wider channels but he may struggle in the closer exchanges. The number eight is exceptional over the ball and will be a threat at the breakdown but the lack of either Jasper Wiese or Dan du Preez in the 23 is surprising.

It means that the gargantuan Damian de Allende will be asked to do plenty of the hard yards in traffic. The centre has formed a superb partnership with the underrated Lukhanyo Am and was crucial to their World Cup triumph in 2019. De Allende has rid his game of the handling errors which plagued him earlier in his career and has become a well-rounded centre who the coaches can rely upon in big games.

Siya Kolisi is also an important presence in these defining encounters but there is more pressure than usual on the captain. Kolisi was one of the players who recently had to isolate after testing positive for Covid-19 and, as a result, hasn’t played since their game with Georgia in early July. But that could also be said of Lions skipper Alun Wyn Jones, who has just returned from injury, and questions will therefore be asked of their form and fitness during Saturday’s encounter.

Jones rekindles the second-row combination from New Zealand as he and the excellent Maro Itoje look to put pressure on the Springboks through their sheer nuisance value. Itoje showed how disruptive he could be at both breakdown and maul during the South Africa ‘A’ encounter and he will have an ally in the form of skipper Jones this weekend. They also have the crucial job of winning ball on their own set-piece and giving a talented backline an opportunity to weave their magic.

Gatland has avoided the temptation of starting the dual playmaker axis of Dan Biggar and Owen Farrell, but they do have the talented Elliot Daly at 13. The Englishman, who last featured in the midfield in 2016 for his country, has a good off-loading and passing game, while his pace and balance means that he is a running threat as well. There are concerns over Daly’s defence, however, particularly when you consider his inexperience in the position at international level, but there is no doubt that he has shone on this tour and deserves selection.

As do Scotland’s Ali Price and Duhan van der Merwe, who have stuck their hands up throughout. Price’s inclusion suggests that the tourists are looking to play at tempo and move the South African forwards around, while Van der Merwe will add power and pace on the outside. He could face a long day against the wonderful Cheslin Kolbe but similarly the South African-born Scot will also fancy his chances one-on-one.

There are two big areas and both happen to be at the set-piece. The first sees the Lions attempting to match the Springboks and play a hybrid forward in the back-row. It was pretty much always going to be the case, despite plenty demanding a Tom Curry-Hamish Watson partnership, and Gatland has opted for Courtney Lawes to start at blindisde against 2019 World Player of the Year Pieter-Steph du Toit. They operate slightly differently, with Lawes more of a carrier and Du Toit a disruptor at breakdown and lineout, but the presence of the Northampton Saints man is to ease the pressure on Luke Cowan-Dickie, Itoje and Jones.

And then there’s the front-row battle. Jacques Nienaber sprung a surprise by naming his two best scrummagers, Steven Kitshoff and Frans Malherbe, on the bench with Ox Nche and Trevor Nyakane starting instead. That potentially gives the visitors a chance to attack the Springbok pack and get on the front foot, while the hosts will hope that Nche and Nyakane can create a stable platform, allowing the replacements to come on and do the damage in the second half. The Lions certainly have the better depth at prop but Kitshoff and Malherbe have the potential to be destructive if the Lions tight five aren’t on their game.

The clash between South Africa ‘A’ and the Lions earlier in the tour suggests that it is going to be a tight contest, but we think the visitors would have learned more from that game than the hosts. To a degree, both teams are now far more battle-hardened, but the tourists look to have the better balanced squad. British and Irish Lions by five points.