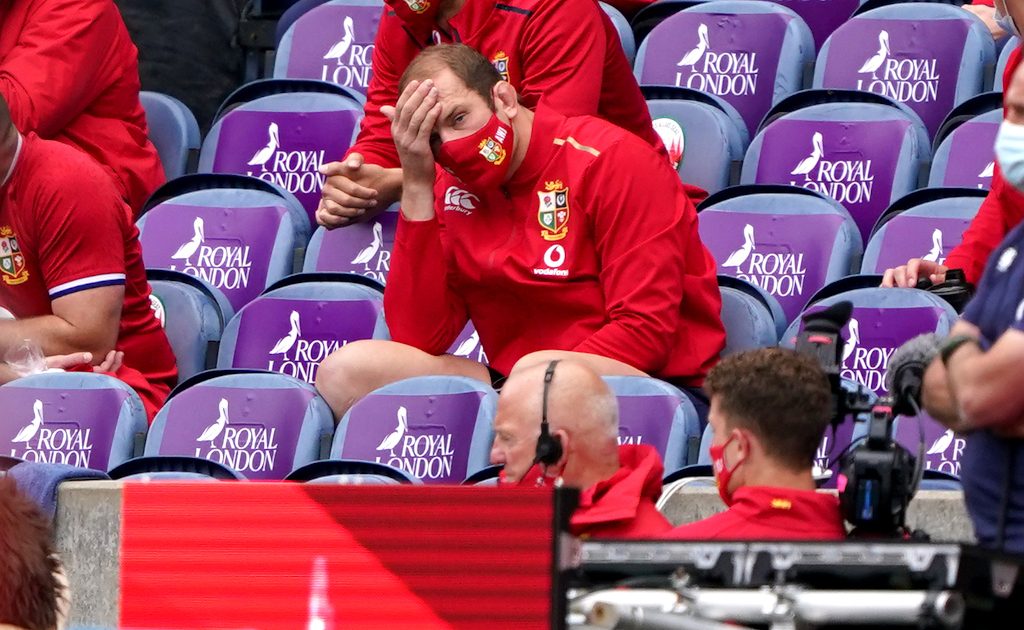 Alun Wyn Jones has been ruled out of the British & Irish Lions tour to South Africa after suffering a dislocated shoulder in the 28-10 win over Japan.

Skipper Jones sustained the injury while being cleared out of a ruck and was escorted from the pitch by medics.

Head coach Warren Gatland will now have to name a replacement and new captain.

“His shoulder dislocated. We’re getting it scanned but it’s looking like we’ll have to replace him,” Gatland said.

“It’s very disappointing. He’s been around rugby long enough but he’ll be gutted. We need to call someone in, get them PCR tested and hopefully get them on the flight tomorrow.”

Jones to return to Wales

Another Welsh player, flanker Justin Tipuric, saw his afternoon at Murrayfield ended early following a tackle shortly after Jones left the field, his disconsolate look as he exited down the players’ tunnel suggesting his suspected shoulder issue was also significant.

Gatland confirmed that Jones will return to Wales on Sunday when the squad leave for South Africa.

The injury looked significant as he left the Murrayfield pitch gingerly holding his left arm and although he appeared back in the stands for the second half, the Lions’ worst fears had already been realised.

“The decision’s pretty much made. I was speaking to the physios and they’ve spoken to Alun Wyn. He understands the very best case scenario is that he may get back for the Tests,” Gatland said.

“We’re discussing a couple of names at the moment with the coaches. Also potentially who will take over as tour captain. It’s very, very early days for us.

“We have a leadership group that are pretty experienced and it’s not something that is urgent to be done. But we are aware of who potentially steps into that role.”

Jones’ Wales team-mate Tipuric also departed in the first half after suffering a shoulder injury and faces an anxious wait to see if he will be fit for the tour.

“Justin got a stinger in the shoulder so we’re going to check to make sure on a scan that there’s no nerve damage,” Gatland said.

“If there was any nerve impingement or damage then that could rule him out, but at the moment we’re pretty confident he’ll be OK and it’s just a stinger in the shoulder.”

Apart from scoring four tries to launch their tour with a comfortable win, it was a bleak afternoon for the Lions.

“No one is in shock because if you’re in shock its reflects back into the whole squad,” Gatland said.

“We understand things are different and fluid and we have to move on and be able to react and make decisions and that is the only way you can deal with it.

“If you go into a shock scenario and look as if you are panicking then it will reflect badly on us.

“It’s disappointing for Alun Wyn and also for Justin Tipuric if he is not right, but we have to do it right.

“Let’s make the right decisions and do it as quickly as we can in the calmest way that we can.”