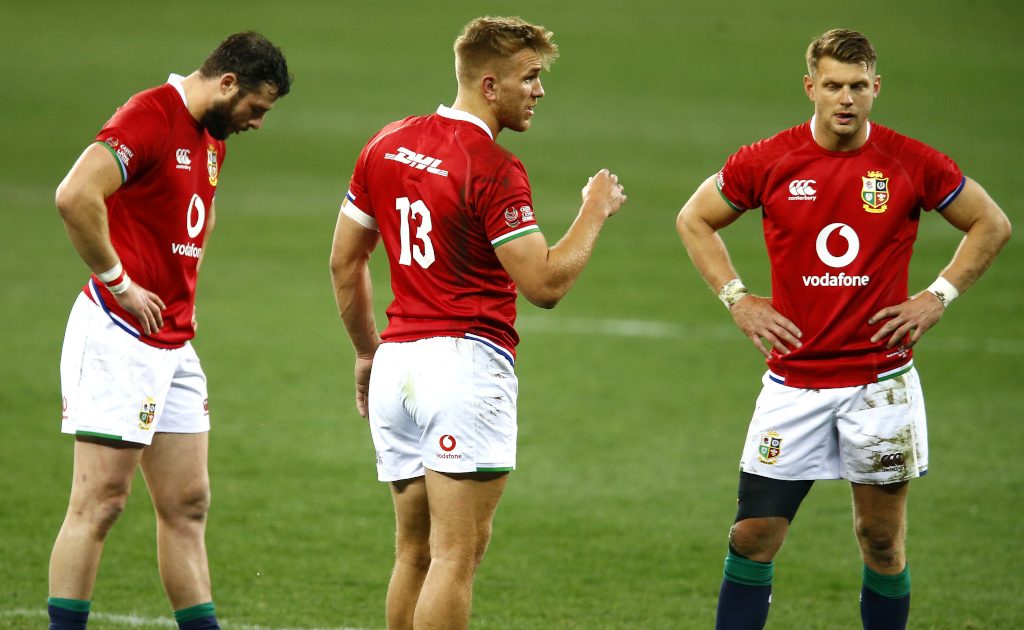 Take a look at the British & Irish Lions’ player ratings following their 27-9 defeat to South Africa at Cape Town Stadium on Saturday.

15 Stuart Hogg: The pick of a dismal Lions back three but couldn’t fire a shot throughout. They really needed the rock solid Liam Williams. 5

14 Anthony Watson: Beat more defenders than anyone else in the first Test but he barely touched the ball this week. Completely shut out. 6

13 Chris Harris: Made a decent early tackle and his physicality was needed as the Springboks unloaded their hefty carriers. Solid enough. 6

12 Robbie Henshaw: Tried to get involved when he could but made little headway against a stiffened Springbok defence. Lions need more. 6

11 Duhan van der Merwe: Hard to see how he keeps his spot. Ill-disciplined and couldn’t catch the ball this week in a disappointing shift. 4

10 Dan Biggar: Solid in the first half but was up against it when the Lions pack went backwards. The majority of 10s would have struggled. 6

9 Conor Murray: Struggled when the Boks tore into the tourists after the interval and one can’t help but wonder if Ali Price comes back in. 6

Places up for grabs

8 Jack Conan: Impressed Warren Gatland in the first Test but this was a far harder game and his spot next week could now be up for grabs. 5

7 Tom Curry: Another player who could miss out if the Lions opt to make changes. Lots of snarl but no bite on a tough evening at the office. 5

6 Courtney Lawes: Unable to make any impression on South Africa, although he produced a superb lineout steal. Way down on last week. 6

5 Alun Wyn Jones: The captain’s body language at the end told its own story of the Lions’ night. Wounds need licking ahead of next week. 6

4 Maro Itoje: Great line-out defence and was a menace, but he could not stop the green shirts alone. He needed much more from his mates. 7

3 Tadhg Furlong: Harshly penalised for one scrum infringement when he lost his footing because of the pitch but did struggle in that area. 6

2 Luke Cowan-Dickie: A much better line-out showing but made little impact around the pitch, with his chop tackles at least doing a job. 6

1 Mako Vunipola: Misgivings over his scrummaging continue as he could not gain parity. However, the front-row was a force in the loose. 6

Owen Farrell did bring some direction but the bench were powerless to turn the tide while the the Springbok cavalry swept their team home. 5