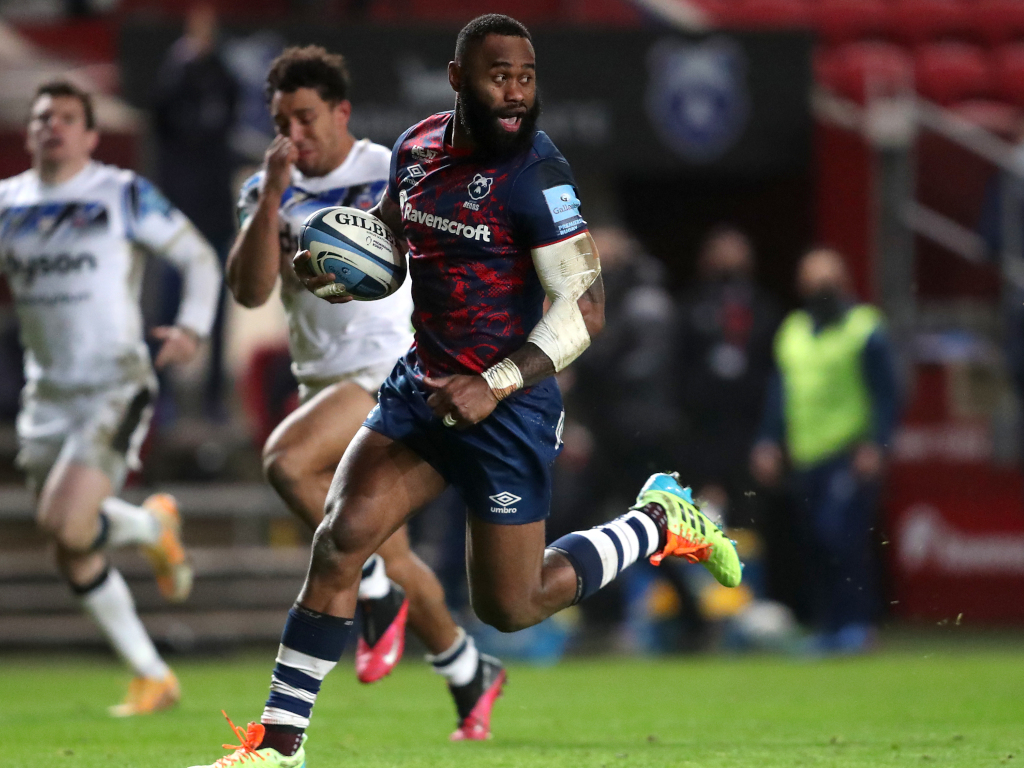 Bristol Bears’ outstanding form continued as they dominated their West Country rivals Bath to increase their lead at the top of the Premiership following a 48-3 win at Ashton Gate.

Fly-half Ioan Lloyd kicked four conversions and a penalty as Bristol made it five successive victories in all competitions and eased past their previous-best Premiership winning margin against Bath of 27 points.

Bath’s preparations for the Premiership resumption were hit by them having to close their training ground after being told last week they were the source of 19 positive Covid-19 tests, only for the league’s testing company to realise a mistake had been made, and the actual figure in Bath’s camp was one.

The disruption clearly affected them, though, and they were off the pace mentally and physically as Bristol showed no mercy with a ruthless display that illustrated an enormous gulf in class.

Bristol, though, proved unstoppable, sending another powerful sign that they mean major business this season.

Bristol showed six changes from the side that beat champions Exeter last time out, with Uren and wing Henry Purdy among those handed starts, while absentees included England prop Kyle Sinckler because of a two-match ban, plus England squad members Max Malins, Harry Randall and Ben Earl.

Bath were without England quartet Anthony Watson, Beno Obano, Will Stuart and Charlie Ewels ahead of the Six Nations, with Josh McNally taking over captaincy duties from Ewels and Miles Reid replacing injured flanker Sam Underhill.

Bristol, their confidence high following victory over the Chiefs, went ahead after just five minutes.

Bath had launched a couple of promising attacks, but the Bristol forwards then took charge, driving a lineout to within inches of the opposition line before switching play, and Lloyd threw out a long scoring pass to Morahan.

And Bristol doubled their advantage three minutes later when another Lloyd pass this time sent centre Piers O’Conor clear, and Morahan provided an assist for Piutau to complete a fine move.

An unsettling start for Bath continued when both locks – McNally and Elliott Stooke – went off for head injury assessments in rapid succession, and it meant Wales number eight Taulupe Faletau making an early appearance off the bench.

Hand the ball to Semi Radradra, sit back, and enjoy 😎#GallagherPrem pic.twitter.com/As7NGIJWAF

Neither McNally nor Stooke rejoined the action and, although a Priestland penalty opened Bath’s account, it was quickly cancelled out by a Lloyd strike.

It was no surprise when dominant Bristol extended their lead 11 minutes before half-time, and it was another brilliant finish, this time from Uren, with Lloyd’s conversion opening up a 17-point advantage.

Bristol had eased effortlessly through the gears, and there was more pain to come for Bath after Priestland collected a yellow card for a deliberate knock-on.

And Byrne proved the beneficiary of relentless work by the Bristol pack, touching down twice in five minutes and condemning Bath to a 34-3 interval deficit.

Bristol moved past 40 points within two minutes of the restart thanks to a stunning 65-metre solo effort by Radradra, then referee Wayne Barnes awarded them a penalty try and Bath flanker Josh Bayliss was yellow carded.

Bath dug deep during the closing stages to try and prevent further damage, but they could take a long time to recover from what was an awful night in every department.

Alex Sanderson’s tenure in charge of Sale Sharks got off to a near-perfect start as they moved into second place following a 25-15 triumph over Leicester Tigers at Welford Road.

They struggled in the early stages, with Leicester controlling matters and deservedly going 8-0 ahead through Tom Youngs’ try and Zack Henry’s penalty, but Sam James’ intercept score changed the course of the game.

From that point on, the Sharks dominated and touched down twice more via Cobus Wiese and Marland Yarde to complete a fine win, despite Nemani Nadolo’s late consolation.