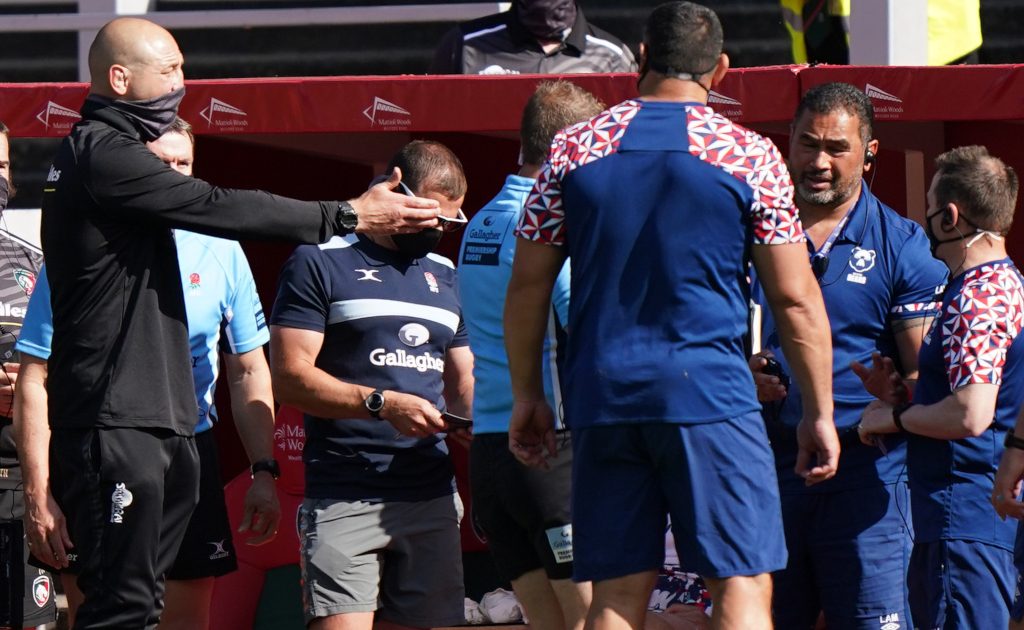 Semi Radradra scored two tries as Bristol secured a home semi-final in the Premiership play-offs with a controversial 26-23 bonus-point victory over Leicester in a pulsating game at Mattioli Woods Welford Road.

Bristol’s win leaves them eight points clear at the Premiership summit and a home win over London Irish next Saturday will ensure that they finish top of the pile.

They gave the battling Tigers a lesson in chance taking with Max Malins and Harry Randall adding to Radradra’s efforts, with Callum Sheedy converting three of the four scores.

However, much of the talk will focus on the latter exchanges when Bristol had Nahuel Tetaz Chaparro sin-binned.

The Bears needed a replacement prop or else they would go down to 13 due to the laws surrounding uncontested scrums.

John Afoa, who had been taken off for ‘tactical’ reasons, was the only player who could come on in that position, but the visitors claimed the ex-All Black was injured.

Pat Lam then reversed his opinion upon realising they would lose an extra man, with Afoa duly returning to the field and helping his side to withstand Leicester’s late onslaught.

Afoa was a late call-up to the XV when Kyle Sinckler withdrew with a hamstring injury.

And Bears soon suffered another setback when Radradra fumbled the kick-off to give the Tigers the chance of an early score. Roared on by a crowd of over 6,000, the hosts threatened the try-line but poor handling at crucial times cost them dear.

However, they were still first on the scoreboard when McPhillips, playing at fly-half in place of George Ford, kicked a straightforward penalty.

The home side then lost wing Harry Potter to injury with Fijian Nemani Nadolo coming on to replace him.

McPhillips’ penalty was the only score of an evenly-contested first quarter before Bears conjured up the first try of the game.

On their own 22, the visitors looked to be going nowhere but a neat off-load from Malins sent Siale Piutau away on a 45-metre run before the centre’s long pass provided Radradra with an easy run-in.

McPhillips succeeded with another penalty but Bristol responded with their second try.

On halfway, Randall, who was playing his first Premiership game since January, quickly took a short penalty before darting away to brush off some weak tackling and score. Sheedy’s conversion gave the visitors a 14-6 interval lead.

After the restart, McPhillips kicked his third penalty to keep Tigers in contention but their impetus continued to be hindered by the loss of line-outs on their own throw.

Leicester brought on their South African powerhouse Jasper Wiese in the back row and they immediately won a scrum penalty but McPhillips was off-target with a 45-metre kick.

Tigers’ next replacement was scrum-half Richard Wigglesworth, who became the first player to reach 300 appearances in the Premiership when he was brought on.

😳 Steve Borthwick was NOT happy with Pat Lam and Bristol.

John Afoa initially came off for 'tactical' reasons, only for Bristol to say he was 'injured'.

The Bears then claimed he was fit enough to return when realising they would lose an extra man. 🤔pic.twitter.com/MrwT5qNTMz

The hosts continued to dominate the second half and were rewarded with a try from Liebenberg who was on the end of a scoring pass from McPhillips.

However, Bristol immediately replied with a superb try when Sheedy’s well-timed pass sent Malins on an unopposed 60-metre run to the line.

Minutes later Bears had another when Leicester lost possession in their own half for Radradra to score his second of the game.

Bristol were not home and dry yet though, and they lost Jake Kerr to the sin-bin for dragging down a maul and Leicester immediately capitalised when Montoya finished off a driving maul.

But despite being placed under enormous pressure in the closing stages, Bristol just held on with 14 men.

Newcastle remain in the European hunt

The Falcons were in control from the get-go and dominated up front, forcing the Warriors into changing their entire front row before the half-hour mark.

Worcester scored two consolation tries in the second half but were outclassed by the Falcons, who bagged their ninth league win of the season.

Tom Willis scored a last-second try to complete a hat-trick and an amazing comeback by Wasps, as they defeated London Irish 39-36 in an absolute barnstormer to move into the Champions Cup places in the Premiership.

The visitors had trailed 33-10 after a torrid first half at the Brentford Community Stadium, in which Curtis Rona and Albert Tuisue both scored twice for the Exiles, who ran in five tries during the first 40 minutes.

But Wasps refused to lie down and were a team transformed after the break, with this victory lifting them up to seventh in the table with just one match of the season remaining.