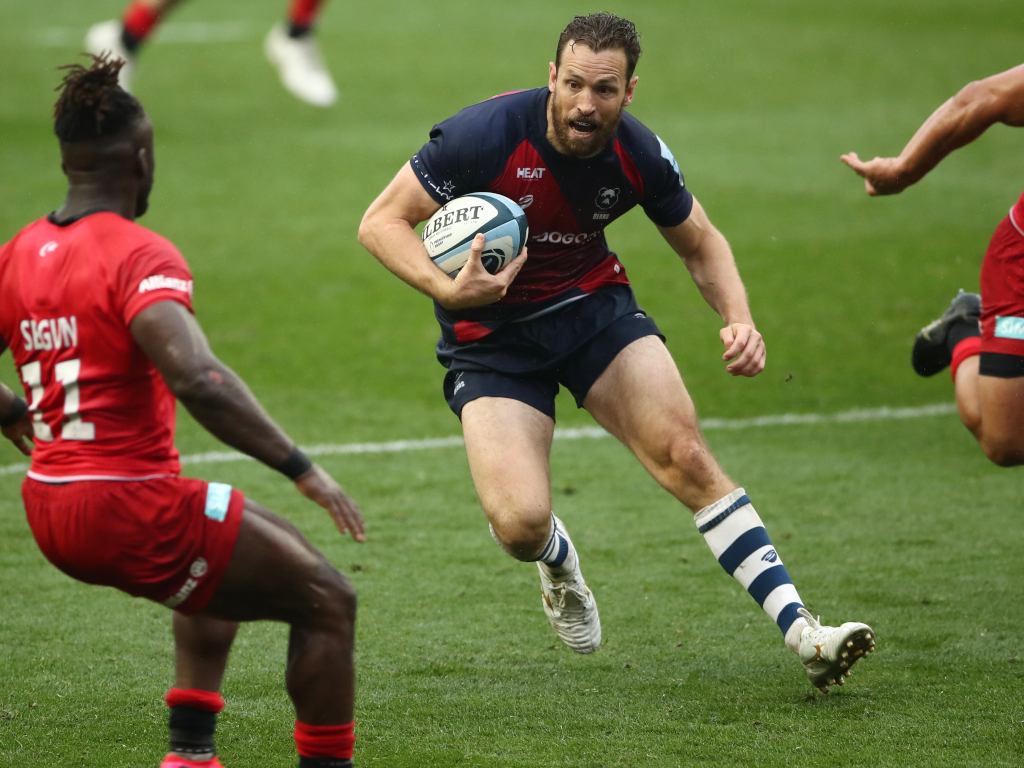 Bristol Bears enjoyed a victorious return to the Premiership season as a late penalty try saw them beat Saracens 16-12 at Ashton Gate.

The 77th-minute score, awarded when Saracens captain and England hooker Jamie George illegally entered a ruck on his own line, meant Bristol triumphed.

George was also yellow-carded, and the Bears held on to clinch the win following a largely forgettable contest that saw more than 30 penalties awarded.

Bristol’s major summer signings Semi Radradra and Kyle Sinckler had quiet debuts, and it looked as if Alex Goode, deputising at fly-half for Owen Farrell, had kicked Saracens home with four penalties.

But they prevailed courtesy of three Callum Sheedy penalties and the seven-point penalty try, denying Saracens a 10th Premiership win before their relegation to the Championship next term.

The behind-closed-doors contest rarely lifted above the mediocre, but Bristol did just enough.

Both teams showed their support for the Black Lives Matter movement before kick-off after clubs were given free rein to decide how they should mark the fight against racism.

12 of Saracens’ line-up chose to take a knee, with Billy Vunipola, Vincent Koch and Michael Rhodes remaining standing in respectful silence, while Bristol’s players formed themselves into a heart shape.

Saracens were rapidly out of the blocks, exerting pressure through the pinpoint kicking of scrum-half Richard Wigglesworth and taking a deserved lead through Goode’s eighth-minute penalty.

Goode found his range again just two minutes later, this time from just inside Bristol’s half, to leave the home side 6-0 adrift.

Radradra barely had a touch during the opening quarter, such was Saracens’ technical excellence, but Bristol opened their account when Sheedy landed an angled 21st-minute penalty.

And the home side drew level when Sheedy kicked a second penalty after Bristol launched a concerted attack through full-back Charles Piutau’s blistering pace.

The penalties continued to flow, though Goode missed a 25-metre chance and Saracens messed up an attacking lineout after kicking to the corner and hoping to shunt Bristol over their own line.

Errors also played their part as the rain swept across Ashton Gate, with a forgettable opening 40 minutes ending 6-6.

Bristol boss Pat Lam made a half-time switch, sending on Ben Earl for his debut against the team he signed on loan from earlier this summer.

Earl replaced his fellow England international Nathan Hughes in the back-row, and he was immediately involved as Bristol looked to increase the tempo following a stodgy first-half display.

England prop Sinckler arrived in the 46th minute for a first Bristol run since he signed from Harlequins, and he immediately gained his team a scrum penalty, with Sheedy kicking the three points.

Bristol thought they had claimed the game’s opening try with 56 minutes gone after wing Luke Morahan applied a brilliant solo finish from 30 metres out.

But referee Matt Carley and the television match official Claire Hodnett consulted at length before the score was ruled out for obstruction by Bristol hooker Harry Thacker on Maro Itoje that opened up a clear run for Morahan.

Saracens responded to that scare by establishing a foothold inside Bristol’s 22, and that pressure was rewarded with a fourth Goode penalty as the visitors edged back in front 16 minutes from time.

But the drama was reserved for the dying minutes, with Bristol ultimately breathing a huge collective sigh of relief as they sealed victory.

In the early game of the day, Worcester full-back Melani Nanai was red carded only 18 minutes into the Warriors’ Premiership return as Gloucester ran in six tries on their way to a 44-15 win.

Nanai crashed into Jonny May with a head-high shoulder charge 10 minutes out from the Worcester line, the Gloucester wing also seeing his game ended as he failed a subsequent head injury assessment.

Nanai’s sending-off continued the Samoan’s miserable first season for Worcester, a serious shoulder injury having sidelined him since early November.

An early try from Ted Hill put the hosts in front, but Nanai’s red card proved a turning point as Gloucester ran riot.

At Sandy Park, Exeter Chiefs extended their lead at the top of the table with a 26-13 bonus-point victory over Leicester Tigers, witnessed by England head coach Eddie Jones.

Jones would no doubt have been impressed by several of his players as Exeter declared business as usual and 11th-placed Leicester showed signs of fresh life under new coach Steve Borthwick.

Dave Ewers, Stuart Hogg and Luke Cowan-Dickie went over for the Chiefs to go with a penalty try while the Tigers were also awarded a penalty try.

In the day’s other match, Ben Spencer marked his debut with an early try as Bath secured a 34-17 victory over London Irish at the Recreation Ground.

The England scrum-half, signed from Saracens in June, crossed the line after just five minutes, with Bath adding four more tries for a bonus-point win which reinforced their place in the Premiership’s top six.

The Exiles struggled from the start with the home club’s mauling game, which yielded three tries by the end of the first quarter.

Tom Dunn crossed twice in that spell before Jonathan Joseph and Jack Walker went over in the second period to seal the maximum.