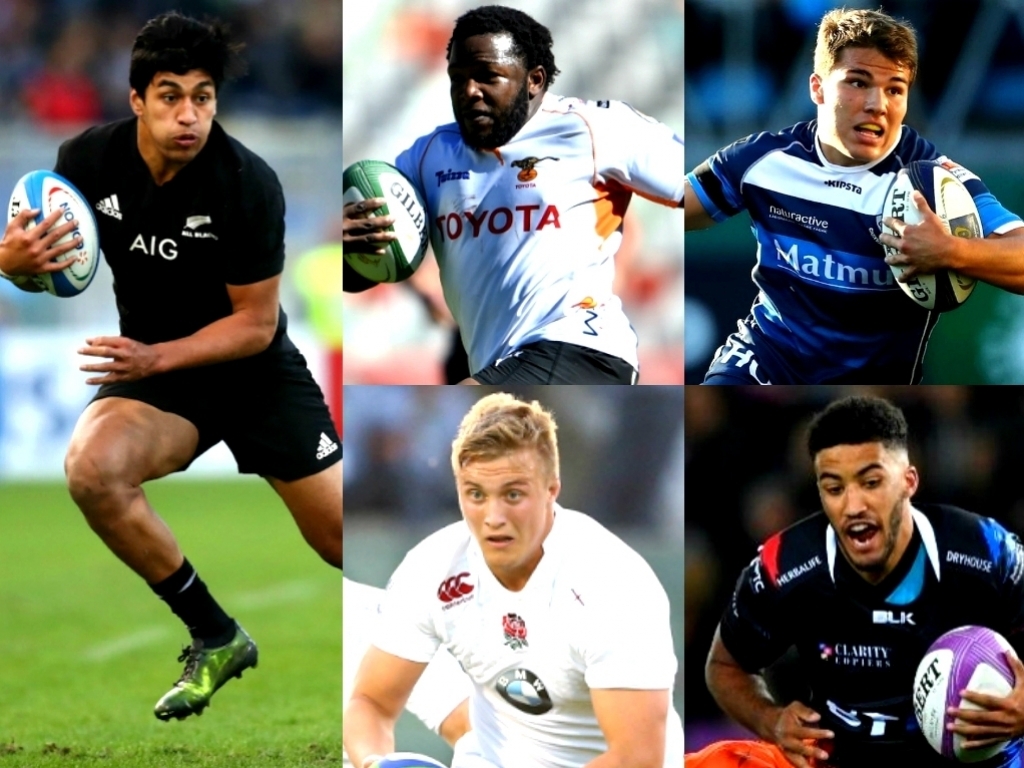 With the festive period in the rear-view mirror and 2017 upon us, it’s a time to look forward.

We have compiled a XV of players poised to breakout this year and grab the rugby world’s attention over the next 12 months.

These players should all get their opportunities in the Premiership, PRO12, Top 14 and Super Rugby this year, whilst some will even have a shot to make a mark in the Test arena and expect all of them to take the chances that come their way.

There is no shortage of possible further honourable mentions here, with plenty of talented young full-backs the world over on the cusp of making the leap, but perhaps none as exciting as Gelant. The former Junior Springbok would almost certainly have broken out in 2016 were it not for a broken jaw and a knee injury ruining his Super Rugby season.

He brings all the control a team needs at 15 with good tactical kicking and a strong aerial game, but also has the counter-attacking spark to make the Bulls a potent side with ball in hand. He is a strong candidate to be fast-tracked into the Springbok set-up if he can stay fit this year.

Speaking of fast-tracking, that’s exactly what happened to Ioane last year, progressing from the New Zealand Sevens side to the All Blacks, during their end of year tour to Europe. We are only just beginning to scratch the surface with the 19-year-old, however.

The Blues looked a much more potent force during Tana Umaga’s debut campaign as head coach last year and Ioane should make himself an integral cog in Umaga’s continued rebuild of the Auckland side. His long-term future may lay at outside centre, but expect him to wreak havoc on the wing this year, outside Piers Francis and Sonny Bill Williams.

Ward captained the Junior Springboks in 2016 and was one of the few shining lights in an all-round desperately disappointing year for South African rugby. He has made the move from the Kings to the Sharks during the offseason and is just the kind of young leader the Durban-based side needs to build around moving forward.

The Sharks have never been a side to throw caution to the wind and the fact Ward is a very adept defender will help him make his way to the starting XV, where he will then be able to demonstrate his effectiveness with ball in hand, both as a powerful carrier and an adept line-runner.

After setting the World Rugby U20 Championship alight last year, Barrett decided to sign with the Hurricanes and join his eldest brother, Beauden, in Wellington, rather than staying in Canterbury and joining his other brother, Scott, at the Crusaders.

The reigning Super Rugby champions lost Willis Halaholo to Cardiff Blues this past offseason and Barrett will be in the mix to start right from day one. If he shows the chemistry with Beauden that you would expect from siblings, not to mention two players built from a very similar attacking mould, then he will be among the favourites for rookie of the year in Super Rugby.

Cokanasiga comes very close to pipping Giles here but with no guarantee of Premiership rugby, Giles gets the nod on the basis of the quality of opposition he will face this year. He has already taken the step up to senior rugby with ease and whilst certainly still a diamond in the rough, the future looks very bright for the Welshman.

Cementing his place in the Ospreys team will be priority number one for Giles but making his Test debut in June, when a number of players will be away with the British and Irish Lions, seems likely if he can keep up the form he has displayed in the first half of the season. At the very least, he should head to the U20 Championship in Georgia and remind everyone why he has star potential.

It’s been a busy couple of years for Shillcock. After making his debut at the age of 17 for Worcester in the Championship playoffs, he has gone on to fill in for England U20s at scrum-half, breakthrough into Worcester’s senior set-up at full-back in Chris Pennell’s absence and now emerge, still at just 19 years of age, as the side’s most potent fly-half.

Worcester are currently embroiled in a relegation battle with Bristol and Shillcock will need to be at his best to keep them out of trouble come the end of the Premiership season. If he can help deliver another year of Premiership rugby for Worcester, look for him to spearhead England in their attempt at a fourth U20 Championship this summer, as well as take another big step forward in senior rugby in the 2017-18 season.

Castres’ loss will most certainly prove to be Toulouse’s gain next season when Dupont makes the short move west to don the rouge et noir. A call-up to wear the blue of France could precede that and it would certainly be befitting of the form and ability that Dupont has shown to date.

Just like any French scrum-half worth their salt, Dupont is also comfortable at fly-half and that versatility will appeal to Toulouse, but it is clear his future, particularly at Test level, lies at scrum-half. A measured box-kicker, swift distributor and dangerous runner around the fringes, Dupont has everything you would look for in a young scrum-half to build around.

The silver lining to the unfortunate retirement of Ita Vaea may be that it allows the Brumbies to develop and give game-time to Fakaosilea. He made the move from the Reds during the offseason and given the expectations and level of performance that the Brumbies hold their pack to, the number eight may have made a very good career decision in making the trip south to Canberra.

A powerful carrier, Fakaosilea impressed for the Australia U20 side a couple of years ago but was unable to break into the senior side at the Reds, most recently because of a hamstring injury which plagued him during the 2016 season. The Brumbies could be the making of the New Zealand-born forward, who is the nephew of Jonah Lomu.

Stade have been patient in bringing Macalou through, despite the flanker impressing whenever he gets the opportunity to feature in the Top 14 or European competition. He is one of the brightest prospects to come through the French U20s in the last four or five years and it seems only a matter of time before Stade have to give up the conservative approach and anoint Macalou as the future of their back row.

If Macalou is afforded those opportunities, don’t rule him out from touring South Africa with the French national team this year, who should recognise his potential not only as a future Test star, but also a possible long-term captaincy candidate.

It’s hard to separate the Curry twins and not just because they look alike. Both players have made their senior Sale debuts as 18-year-olds this season, featuring in both the Premiership and Champions Cup. It’s unlikely they will be available for the U20 Six Nations, with both players set to be at the forefront of Sale’s plans over that two-month period.

Tom and Ben both have extremely impressive skill sets for two players so young, with breakdown nous, defensive work rate and dynamic carrying ability abounding, not to mention the physical robustness to cope with the rigours and demands of senior rugby. The duo could be packing down as Sale’s starting flanks by the end of 2017.

Perhaps the best kept secret in English rugby, Ehizode was one of, if not the most dominant player in the Premiership Academy U18 league last season. He missed out on the initial England U20 elite squad this season, with the powers that be favouring the group that had been together previously at U18 level, but that has not stopped Ehizode from beginning to make waves at club level, including making his debut for Wasps in the Anglo-Welsh Cup.

His proficiency as a lineout jumper, carrier and tackler at academy level was easy to see and he has the ability to make an impact in the Premiership for Wasps, albeit possibly at blindside flanker to start with. With Ashley Johnson continuing his transition to hooker and both James Haskell and Sam Jones looking set to be part of Eddie Jones’ vision for England, opportunities should arise for Ehizode in 2017.

The big Argentinean lock made both his Jaguares and Pumas debuts last year, at the tender ages of 18 and 19 respectively. Whilst it had looked like Tomás Lavanini and Guido Petti could form the Argentinean engine room for the next decade, the arrival of Kremer has thrown a cat among the pigeons and the youngster’s dramatic rise shows no signs of abating in 2017.

He is already bigger than Petti and plays with a power that outstrips even that of Lavanini and though there are technical deficiencies in his game, something which is to be expected of any 19-year-old, the potential he offers should continue to see him fast-tracked at both club and Test levels. If he can develop as a lineout caller and defender, Kremer could be one of the premiere second rows in the world come the 2019 Rugby World Cup.

Tupou, or “Tongan Thor” as he has become known, started to break into the Reds senior team last year and with another year of seasoning and experience under his belt, he should make an even bigger impact in 2017. The days of his viral videos as a schoolboy, marauding through opposition defences, are now gone and it’s the improvements he makes as a scrummager which will dictate how he is viewed as a pro player.

With Kane Douglas and Rob Simmons in the second row and Stephen Moore brought in from the Brumbies, the Reds have an opportunity to be one of the better set-piece sides in Super Rugby this year and it should be a good environment for Tupou to learn about the finer arts of the scrum and lineout. With his undoubted ability in the loose still in his armoury, Tupou will be an exciting player to watch this season.

Walker’s tally of two U20 Championships titles and three tournament appearances is unsurpassed globally and a result of his talent being identified early at his former club, Yorkshire Carnegie. He made the move to Bath last year and though injury prevented him from making an impact in 2016, he is now ready to compete with Ross Batty and Tom Dunn in the senior side.

A consistent lineout thrower and strong scrummager at U20 level, Walker will have to deal with a transitional phase of adapting to senior Premiership rugby, but having already played regularly at senior level for Yorkshire, it shouldn’t take him too long. Walker will soon be ready to join England’s rapidly lengthening list of available hookers.

Thanks to Du Toit being moved to and fro in the front row, the man that succeeded him in the Junior Springbok number one jersey leapfrogs ahead of him in this XV. There is no doubt that Du Toit has a bright future in the game but Nché has the ability to lock up the starting spot with the Cheetahs this season and push on for Springbok recognition.

His ability in the loose is impressive and though slightly undersized by traditional standards, he is no weak link at the set-piece, either. The Cheetahs, just as much as the Springboks, need impetus and go forward and Nché can help provide them with that this year.