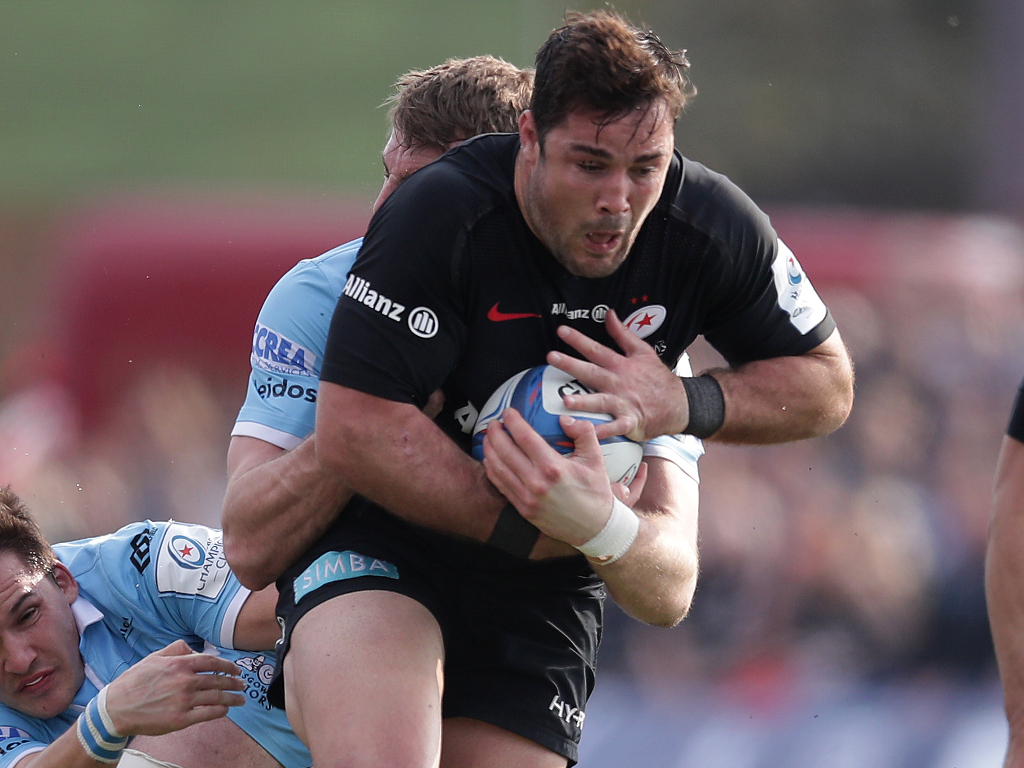 There are six Champions Cup matches scheduled to take place on Saturday with Northampton Saints’ showdown with Leinster the standout fixture.

Northampton Saints director of rugby Chris Boyd has made three changes to his starting line-up ahead of Saturday’s blockbuster Champions Cup showdown against Leinster.

The men in Black, Green and Gold are looking for their third straight win in the competition which would send them top of Pool One – although the Irish powerhouses are also unbeaten going into the clash.

Saints put local rivals Leicester Tigers to the sword last time out and Boyd has not strayed far from that formula this week, with fit-again number 10 Dan Biggar, full-back Ahsee Tuala and flanker Jamie Gibson the only three changes to that side.

Biggar slots back in at fly-half alongside World Cup winner Cobus Reinach, with Matt Proctor – who scored twice on his Premiership debut last weekend – and Rory Hutchinson deployed again outside them in Northampton’s midfield.

Wingers Taqele Naiyaravoro and Tom Collins continue in the back three but there is a change at full-back as Tuala replaces the unavailable George Furbank.

Gibson is the only change to the pack and slots into the back-row alongside England internationals Tom Wood and Teimana Harrison.

That means skipper Alex Waller, Mikey Haywood and Ehren Painter will make up the front-row once again with Alex Moon and Api Ratuniyarawa behind them in the engine room.

There’s more good news amongst the replacements with centre Piers Francis recovering from a shoulder injury to take a spot on the bench, while the likes of James Grayson and Lewis Ludlam will also be hoping to make an impact if they are introduced to the action.

Meanwhile, Jordan Larmour, Dave Kearney and James Lowe have been selected by Leinster boss Leo Cullen in his back three, with Robbie Henshaw and Garry Ringrose in the centre.

In the half-backs Jamison Gibson-Park and captain Johnny Sexton have been selected.

In the pack, Cian Healy, Rónan Kelleher and Andrew Porter are in the front-row with Devin Toner and James Ryan behind them in the second.

Finally, in the back-row, Rhys Ruddock has been selected at blindside, with Josh van der Flier at openside and finally Caelan Doris at number eight.

It's a big old @ChampionsCup weekend at the Gardens.

Your Saints to face Leinster…

Top 14 pacesetters Lyon have named a strong starting line-up for this clash at home against Benetton as both sides go in search of their first Champions Cup victory.

Scrum-half Baptiste Couilloud leads the home side and he is joined in the half-backs by Jonathan Wisniewski while Charlie Ngatai and Thibaut Regard form the centre combination.

Toby Arnold and Xavier Mignot are the starting wings and Jean-Marcellin Buttin will wear the number 15 jersey.

In the forwards, Carl Fearns packs down at number eight with Patrick Sobela and Dylan Cretin the two flankers while Hendrik Roodt is joined in the second-row by Killian Geraci.

Jeremie Maurouard will start at hooker with Clément Ric and Raphael Chaume the two props.

Meanwhile, Benetton head coach Kieran Crowley has made numerous changes to his run-on side after last weekend’s narrow PRO14 defeat at home against Cardiff Blues.

There are 12 changes in all with captain and inside centre Alberto Sgarbi, number eight Toa Halafihi and loosehead prop Nicola Quaglio the only survivors from last week’s run-on side.

Tommaso Benvenuti starts in midfield alongside Sgarbi while Antonio Rizzi and Tito Tebaldi are the half-back duo. Luca Sperandio starts at full-back with Angelo Esposito and Leonardo Sarto the two wingers.

In the pack, Giovanni Pettinelli and Sebastian Negri are the two flankers with Federico Ruzza and Niccolò Cannone starting in the second-row. Quaglio is joined in the front-row by Federico Zani (hooker) and Tiziano Pasquali (tighthead prop).

The Ulster coaching team have made five changes to the side that recorded a bonus-point victory against the Scarlets last Friday.

In the back three, Louis Ludik shifts to the right wing as the returning Jacob Stockdale comes in at full-back, while Craig Gilroy retains his spot on the left wing. Luke Marshall comes back into the midfield alongside Stuart McCloskey, while Billy Burns resumes the fly-half position and once again partners up with scrum-half John Cooney.

The front-row is the same for the third game running: Eric O’Sullivan starts at loosehead prop, Rob Herring will line out at hooker, and Marty Moore packs down on the tighthead side of the scrum.

Alan O’Connor retains his starting berth in the second-row and is joined by Iain Henderson who comes in again to captain the team. Jordi Murphy returns at openside flanker, alongside Sean Reidy at blindside and Marcell Coetzee at number eight.

Adam McBurney, Andrew Warwick, Tom O’Toole, Kieran Treadwell and Matthew Rea will be the forward reinforcements, and covering the backline will be David Shanahan, Bill Johnston and Matt Faddes.

Fijian forward Tevita Cavubati lines up in the second-row with South African lock Stephan Lewies. Semi Kunatani joins Chris Robshaw and Alex Dombrandt in the back-row as Tom Lawday is rotated to give Kunatani his first start of the season.

Head of rugby Paul Gustard has made no changes to his backs that defeated Gloucester last weekend in the Premiership, with late replacement winger Travis Ismaiel again starting at 14.

La Rochelle head coach Ronan O’Gara has named his side for their Pool Two encounter with Glasgow Warriors at Stade Marcel Deflandre.

In the backline, Fiji international Kini Murimurivalu lines up at full-back in a back three alongside Vincent Rattez and Pierre Boudehent while Jérémy Sinzelle and Pierre Aguillon are the starting centres and Jules Plisson and Alexi Bales are the half-back pairing.

In the forwards, captain Victor Vito starts at number eight and he is joined in the back-row by Kevin Gourdon and Zeno Kieft with Mathieu Tanguy and Thomas Jolmes packing down in the engine room.

Ramiro Herrera and Dany Priso are the starting props and Jean-Charles Orioli lines up at hooker.

Meanwhile, Glasgow Warriors head coach Dave Rennie has made 10 personnel changes to his starting XV for this match.

A matchday 23 containing 18 internationals will make the trip across the English Channel in what will be the first-ever meeting between the two sides.

An all-new front-row sees Fraser Brown pack down at hooker, lining up between props Alex Allan and Zander Fagerson.

Scott Cummings and Jonny Gray combine in the second-row for the first time this season in Glasgow colours, following their respective appearances at the recent Rugby World Cup in Japan.

Callum Gibbins returns from injury to line up at openside, in a back-row completed by Ryan Wilson on the blindside and Matt Fagerson at number eight.

Behind the scrum, George Horne and Adam Hastings return in the half-backs having been rested for last weekend’s clash with Leinster at Scotstoun.

Sam Johnson continues at inside centre, with Nick Grigg coming into the side to partner his fellow Scotland midfielder.

DTH van der Merwe and Niko Matawalu will start on the wings, as Tommy Seymour reverts to full-back.

Following an impressive debut from the bench last weekend, Aki Seiuli is in line for his first appearance in Europe’s premier club competition as he lines up alongside George Turner and Adam Nicol as the front-row replacements.

Rob Harley brings his considerable experience to the replacements bench, with Tom Gordon coming into the squad in the number 20 jersey.

Ali Price and Pete Horne rotate to the bench after starting last weekend, as the newly re-signed Kyle Steyn completes the matchday squad.

Meanwhile, D’arcy Rae sustained an injury to his hand in the defeat to Leinster last weekend. The prop has undergone surgery and is expected to be out of action for up to four months.

🆕 Here is your Glasgow Warriors team to take on @staderochelais in the #ChampionsCup tomorrow afternoon, brought to you by @MackenzieConstr

📺 Supporters can watch the match live at @thefamousgrouse Fan Zone at The Old Schoolhouse on Woodlands Road in Glasgow.

The Ospreys return to Champions Cup action on Saturday when they face French side Racing 92.

New signing Marty McKenzie makes his Ospreys debut and is handed the number 10 jersey. He partners up with Aled Davies to form the half-back pairing.

An unchanged back three sees Dan Evans line up alongside Luke Morgan and Hanno Dirksen. Owen Watkin and Scott Williams complete the backline with Tiaan Thomas-Wheeler, Luke Price and Shaun Venter providing the cover off the bench.

Up front, Nicky Smith returns to the starting line-up alongside Scott Otten and Ma’afu Fia, with Bradley Davies and the returning Adam Beard partnering in the second-row. An unchanged back-row sees Dan Lydiate captain the side with Olly Cracknell and young Morgan Morris completing the pack.

For Racing, they have made just one change to the backline which impressed against Munster in Round Two with Maxime Machenaud starting at half-back.

He is joined in the playmaking positions by Scotland star Finn Russell, while a dangerous back three once again comprises of Simon Zebo, Teddy Thomas and Juan Imhoff.

There are also minimal alterations up front but there are a couple of notable absentees. Hooker Camille Chat and lock Dominic Bird are out, which means Teddy Baubigny and Bernard Le Roux come into the side respectively.

Peter O’Mahony captains the Irish province with 14 changes to the team that faced Edinburgh last weekend. Stephen Archer, who made his 200th Munster appearance last week, is the only player to retain his place.

Mike Haley, Andrew Conway and Keith Earls are the in-form back three combination with Rory Scannell and Chris Farrell renewing their centre partnership.

Conor Murray and JJ Hanrahan are named in the half-backs.

James Cronin, Niall Scannell and Archer pack down in the front-row with Jean Kleyn and Billy Holland in the engine room.

Tadhg Beirne starts in the back-row as O’Mahony moves to openside flanker and CJ Stander starts at number eight.

Nick McCarthy is named among the replacements and is set to make his first Champions Cup appearance for Munster.

The 33-year-old has been the cornerstone of the Sarries defence for almost 12 years, making his club debut against Gloucester in November 2008.

Since then the Sarries skipper has appeared in 63 European games and became only the second skipper to lift the tournament’s trophy on three occasions in May 2018.

Barritt is named in a backline that has five changes from the team that secured victory at Bath last time out.

Centre partner Alex Lozowski also has a landmark outing to look forward to; the England international is set to join the Saracens 100 Club at Thomond Park.

Signing from Wasps ahead of the 2016/17 season, Lozowski has established himself as a key figure in the Wolfpack midfield, and has two European honours to his name.

Rotimi Segun returns outside him on the right flank after scoring twice in the last round in the victory over Ospreys and the speedster will line up in the back three alongside fellow Academy graduate Matt Gallagher.

A fresh-looking half-back pairing of Ben Spencer and Manu Vunipola will look to control proceedings in Limerick and in front of them they have four new additions to the pack.

Richard Barrington and Jack Singleton are back in the front-row role and Maro Itoje switches to lock to accommodate Nick Isiekwe on the blindside. Jackson Wray and Ben Earl complete the back-row.

On the bench, Kapeli Pifeleti (knee) and Max Malins (foot) have recovered from long-term injuries with the latter included in a matchday 23 for the first time this season.