Home South Africa Blitzboks do the double in Canada 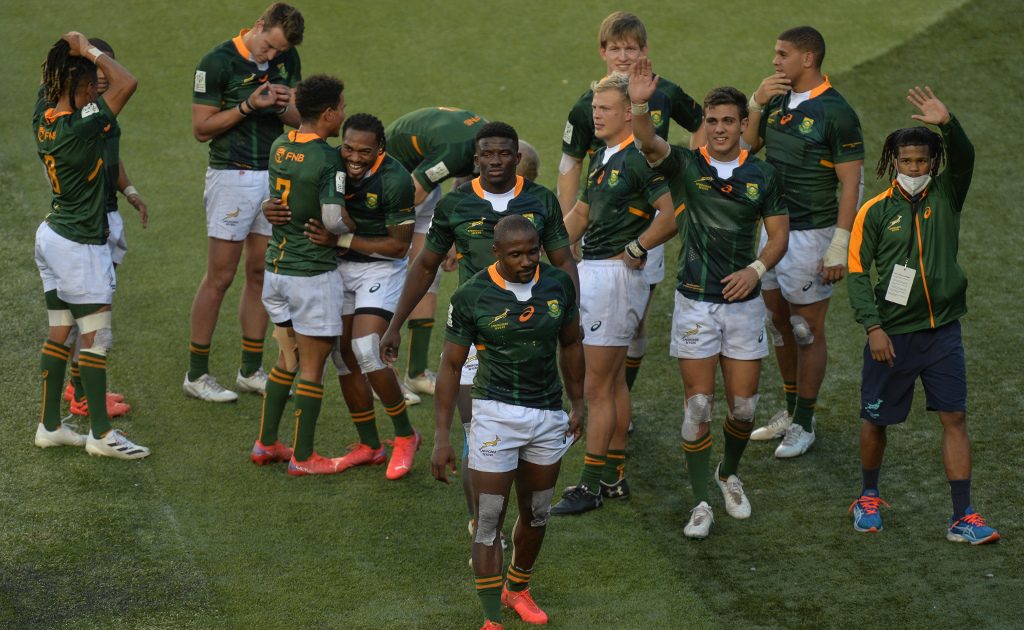 The Blitzboks backed up their win in Vancouver last week to take the second tournament of the shortened series in Edmonton, securing a second gold medal with a 24-12 victory over Great Britain in the final.

South Africa’s fourth series title had already been wrapped up before then, thanks to a 33-7 defeat of Vancouver finalists Kenya in the Cup semi-final. Kenya bounced back to win the bronze medal after hosts Canada put up a real fight, while the result of the day went to Germany who claimed fifth place after an extra-time win over USA.

Absent Olympic champions Fiji and other series powerhouses New Zealand and Australia will have taken note of the Blitzboks’ performance ahead of the start of the 2022 campaign and no doubt been impressed by the way Neil Powell’s new-look squad came together so quickly.

In a demonstration of their strength in depth, debutants like Ronald Brown took to the big stage straight away and they will go into the opening tournament of the 2022 series in Dubai riding the crest of a wave.

“It has been an awesome two weeks, we came here with a mission to stick together and focus on our system and build on that so I am very proud of the team,” said Muller du Plessis, South Africa’s star performer in Edmonton with 11 tries – the most by a Blitzboks player since Seabelo Senatla crossed that many times in Dubai in 2016.

Du Plessis struck twice in the first half of the final to help the Blitzboks overcome an uncharacteristically sloppy start which saw them reduced to six men following Selvyn Davids’ sin-binning.

Great Britain wasted no time in capitalising on their one-man advantage to score through Robbie Fergusson but the setback only seemed to galvanise the Blitzboks who responded through Muller, after a good break Christie Grobbelaar, moments before they were restored to their full complement of players.

Captain Siviwe Soyizwapi then latched onto a well-weighted kick through from Brown to score the first of his two tries. But du Plessis beat Soyizwapi to the double with an arcing run to the line as South Africa went into half-time holding a 17-7 advantage.

Soyizwapi joined du Plessis in reaching double figures for the tournament with his second as South Africa pulled further clear and effectively ended Great Britain’s hopes of becoming the first British side to win a Series tournament since Scotland triumphed in London in 2017.

No-one told Tom Bowen that the game was dead though, and the winger raced in for his 99th series try and almost brought up his century, only to be dragged into touch by du Plessis two metres out.

That was the last real threat to the Blitzboks’ line, which was only breached four times in the entire tournament, and that defensive prowess aligned to their attacking ability make them a force to be reckoned with no matter the opposition.

“We normally have one game in the tournament where we make too many mistakes and probably this last one was this game for us but, again, with the new guys we have in the team, I am very happy with the performance over the two weeks,” said Blitzboks head coach Neil Powell.

Canada were chasing their second bronze medal at home after winning in Vancouver in 2020 and when Jake Thiel brought them level with Kenya at 14-14 at the start of the second half, it looked game on.

However, the Shujaa’s big-name players, Willy Ambaka and the ultimate showman, Alvin Otieno, took the wind out of their sails with 55-metre runs to the line straight from kick-off.

Otieno had already got his name on the scoresheet in the first half along with Nelson Oyoo, while another veteran Billy Odhiambo rounded off the scoring in a 33-14 win.

As a team, Canada are at a different stage in their development but the performances of players like Thomas Isherwood and Brennig Prevost, who converted tries from Alex Russell and Jake Thiel, point to a bright future.

Kenya had found themselves in the bronze medal match after losing out to South Africa in the first-ever Cup semi-final meeting between the teams.

A repeat of last week’s final ended in a similarly emphatic win for the Blitzboks. As hard as they tried, Kenya had no answer to the blistering Blitzboks who secured the series title with a 33-7 victory.

Kenya conceded a try to the prolific du Plessis after just 13 seconds but refused to wilt like in the Vancouver final and dominated possession for the next three minutes. But against the run of play, Soyizwapi found his way over and then added another before Brown dotted down. Jeff Oluoch ensured Kenya didn’t end the match scoreless.

Great Britain suffered an early blow when Max McFarland limped off with a knee injury in the first minute. The Scot had eight tries to his name in Edmonton – one short of his previous best in a single Series tournament – when his involvement was cut short.

Super-sub Bowen came on and was a constant livewire in attack as he chased the three tries he needed for his Series century as well as making telling contributions in defence.

Briefly, at the start of the second half, Canada led 7-5 after Andrew Coe’s try was converted but tries from Luke Treharne, Fergusson and Bowen settled the contest before Brennig Prevost scored a consolation at the death.

It was Prevost’s kicking ability that had got Canada through to the last four with a brilliant touchline conversion that won them their quarter-final against Ireland, 14-12. It was in total contrast to Kevon William’s effort which denied USA the chance to force extra-time against Great Britain in the first match of another brilliant day at the Commonwealth Stadium.

A third hat-trick at the Canada Sevens from Max McFarland had put Great Britain 21-14 ahead but when Gavan D’Amore scored under the posts with three minutes to go, Williams was left with what seemed like a simple two-pointer to level the scores. However, the Vancouver Dream Team player put his kick under the bar instead of over it and Great Britain wound the clock down effectively from that moment on to go through.

Ireland had the advantage in the second of the quarter-finals thanks to tries from two of the players they called up as injury cover on the eve of the tournament, Jordan Conroy and Aaron O’Sullivan.

But Josiah Morra finished the match as he started it by scoring a try, the second from a lineout move, to make the score 12-12 with time nearly up. Up stepped Prevost to deliver when it mattered, in a similar vein to the now-retired Nathan Hirayama, the man whose boots he is trying to fill in the playmaker role.

Germany were slow out of the blocks in their first-ever series Cup quarter-final and looked down and out after conceding three tries to trail 19-0 at half-time.

A brace of tries from Jeff Oluoch and one from Alvin Otieno had seen the Shujaa take advantage of Germany’s breakdown problems. Carlos Soteras Merz pulled one back for Germany but when the unstoppable Otieno got his second, it looked game over at 24-7.

A spirited fightback from Germany led to tries from Tim Lichtenberg and Phil Szczesny and extra-time looked a distinct possibility until referee Finlay Brown finally called time on a riveting encounter with seven points still between the teams.

Meanwhile, South Africa bettered the 38-point margin they managed in beating Hong Kong 43-5 on day one in Edmonton when the sides met in the final quarter-final. Du Plessis scored with just 10 seconds on the clock to set them on their way to a 46-0 victory.

Soyizwapi then helped himself to a quickfire double, his second try taking him to 100 on the Series. Five more players added their names to the scoresheet as the Blitzboks joined Kenya and Great Britain in making it through to a second consecutive semi-final.

Earlier on, Chris Umeh was the hero for Germany as Damian McGrath’s side added USA to the day one scalp of Great Britain.

With the scores tied at 19-19 in stoppage time, the strapping 20-year-old prevented Naima Fuala’au from grounding the ball as he reached out to score, stealing possession from him centimetres above the line.

Then, in golden-point extra-time, Germany claimed the ball from the kick-off and went through the phases before working an opening for Umeh to stride through and score. It was a brilliant finish to a brilliant tournament for the invitation team who have been pressing hard for Series core team status in the last few years.

For USA, it was a disappointing end to the day especially as they lost try-scorer Adam Channel and Gavin D’Amore to injury at either end of the contest.

Having begun day two with two defeats, Pool C winners Ireland and Hong Kong met in the match to decide seventh place. Despite Jordan Conroy bagging a brace after half-time, his second bringing up his Series half-century, it was Max Denmark-inspired Hong Kong who prevailed 21-14 to repeat last week’s finish.

Spain opened up a 22-0 cushion in the ninth-place play-off against Chile before Diego Warnken scored twice to give Los Condores Sevens a glimmer of hope. But Emilien Cabale’s late try secured victory for a Los Leones side that only missed out on the Cup quarter-finals on points difference.

In the 11th-place decider, Jamaica beat Mexico 28-10 after overturning a 10-7 half-time deficit.

The women’s Fast Four competition followed the same pattern as Vancouver with Great Britain defeating USA in the final and Canada proving too strong for an improving Mexico in the bronze medal play-off.

Jasmine Joyce showed just why she is one of the most talked-about players in world rugby right now with another impressive showing.

The Welsh speedster scored two in a comfortable 50-5 win against Mexico in the semi-finals and it was her first-half double that handed Great Britain a 10-0 half-time lead over USA in the final.

The two-time Olympian hung out wide to score her first from close range and then left Summer Harris-Jones for dead with a sudden burst of acceleration as Great Britain counter-attacked from turnover ball.

Joyce sauntered home at the start of the second half to bring up her hat-trick and take her overall tally for the tournament to 10 tries. With Emma Uren landing the first of her three conversion attempts, Great Britain went 17-0 up.

A USA team with the unrelenting Steph Rovetti in it never gives up and the Women’s Sevens Eagles got on the board with two minutes to go when their top try-scorer from last weekend, Jaz Gray, sprinted down the left touchline.

Great Britain had the final word, however, Amy Wilson Hardy getting a try after a good piece of support play.

At the final whistle, Joyce went through the increasingly familiar routine of collecting the player of the final award. “To play alongside these girls has been fantastic and to come away with back-to-back wins is incredible,” she said.

“Credit to all of the girls, we have had so much fun and literally every one of us is living the dream.”

Beaten 22-12 by USA in the semi-final, Canada had the consolation of posting the highest score in either of the Fast Four competitions over the past two weeks, slightly improving on their rivals’ 62-0 win over Mexico in Vancouver.

Nine different players got their names on the scoresheet in a 63-5 victory over Las Serpenties. Mexico scored their fourth try of the tournament in the defeat having failed to register a single point in the first tournament.