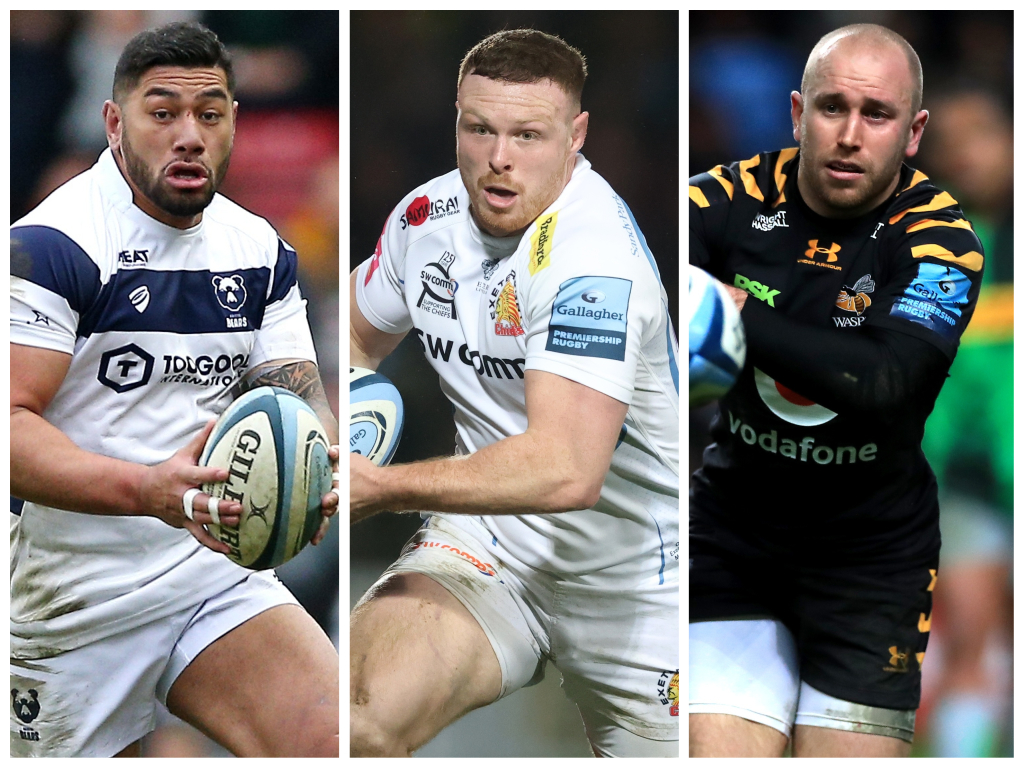 After 372 days of extended action, the 2019/20 Premiership is finally over with Exeter crowned Champions. Planet Rugby features writer James While picks our Premiership Team of the Season.

Competition in the front-row, back three and in the back-row was particularly strong, but the biggest takeout is that 13 of our 15 are English-qualified and homegrown, a testimony to the depth in English rugby right now.

Unsurprisingly, following their haul of silverware, Exeter Chiefs lead the way with five representatives, while Bath and Wasps have three apiece. Be sure to comment and also leave your own line-up in the comments section below.

Premiership Team of the Season

15 Charles Piutau (Bristol Bears): A close run affair with the incredible All Black taking the honours narrowly from the excellence of Exeter’s Stuart Hogg and solidity of Sale’s Luke James. Piutau is a creative force of nature and his 1477 metres gained over the season, 450 metres more than Hogg, showed the power of his attacking threat and the value he offers to Bristol’s attacking ambition.

14 Ollie Thorley (Gloucester): The raw stats from the season don’t lie and 11 tries, 908 metres and 25 defenders beaten underline the claims of the electric West Countryman. Six tries since the restart speaks volumes for the ambition and pace of the Gloucester flyer and, whilst England are stacked with wing options, Thorley’s case is compelling. He beats Zach Kibirige (Wasps) and Luke Morahan (Bristol Bears) to the right wing position.

13 Henry Slade (Exeter Chiefs): By far the hardest position for us to select, as Exeter Chiefs’ Slade sees off the incredible claims of Bristol’s Semi Radradra to win our outside centre berth. Slade’s consistency, ability to rise to the big occasion and all-round game control just sees him edge the competition, as his display in the monsoon conditions of the Premiership final underlined. Also considered was Ollie Lawrence (Worcester Warriors).

A touch of absolute class by Henry Slade 🔥

He spots the gap and pounces to give @ExeterChiefs the first try of the #GallagherPremFinal! pic.twitter.com/c9ljS6M3pc

12 Jimmy Gopperth (Wasps): At 37, no player has better game impact or match control than the veteran Kiwi. It’s no coincidence that his emergence from injury saw Wasps rise from 10th to second place, but alongside his points scoring and distribution is his phenomenal leadership, essential in a young but talented Wasp backline. We can’t think of a better bang for buck overseas signing in Premiership history, and he sees off the challenges of another evergreen, the retiring Brad Barritt (Saracens), and the emerging power of Rohan Janse van Rensburg (Sale Sharks).

11 Ruaridh McConnochie (Bath): A few people scratched their heads in surprise when the former Olympian was selected for the 2019 World Cup, but Eddie Jones took the Bath flyer as a ‘work in progress’. Nine tries and a complete game in defence and attack vindicate his selection with few wingers showing the all-round appetite and pace that McConnochie has, as Taqele Naiyaravoro (Northampton Saints) and Ollie Hassell-Collins (London Irish) just miss out on selection.

10 Joe Simmonds (Exeter Chiefs): Simmonds’ rise in three seasons from callow youth to ‘Captain Fantastic’ has been meteoric. His unerring kicking, combined with fast hands and an eye for the outside break, took his club to a memorable double and sees him edge into top spot over other youthful contenders Callum Sheedy (Bristol Bears) and Jacob Umaga (Wasps). We think the battles between these three young starlets will entertain us for years to come, but right now, Joe is king of the heap.

9 Dan Robson (Wasps): Another hard one to pick, with solid claims from Bath’s Ben Spencer and World Cup winner, Faf de Klerk of Sale, pushing the Wasp all the way to the honours. It’s speed and variety that sets Robson apart, equally happy darting around the fringes, kicking to grass or air with pinpoint accuracy, or serving his midfield with a rocket pass. England haven’t yet been able to get the best out of Robson due to injury and illness but, with the Wasp now buzzing, an extended international opportunity beckons.

8 Sam Simmonds (Exeter Chiefs): Dynamic is the word that characterises Exeter’s electric number eight, as evidenced by his 10 tries that contributed hugely to his team’s success. Pace and a nose for the line outweighs any perceived questions about size and Simmonds now must convince Eddie Jones that he has the power to dent international defences in a position where England have an embarrassment of riches. He beats off the substantial challenges of Nathan Hughes (Bristol Bears) and Brad Shields (Wasps).

7 Ben Earl (Bristol Bears): Whilst some may argue Earl is best at eight, his heroic efforts in a superb Bears back-row defined his team’s season, as the back-row finished top of the Premiership try-scorers with 11 five-pointers to go along with his 15 turnovers and 901 metres made. His competition with runners-up Tom Curry (Sale Sharks) and Sam Underhill (Bath) for the England seven shirt is a mouth-watering one but, in a time in the game where back-rowers need to score tries, he might just emerge as the favourite to nail down the starting berth.

6 Jack Willis (Wasps): If outside centre was the hardest choice we made, blindside flanker is the easiest, as the claims of “Jack the Jackal” are absolutely compelling, and he must surely be the Premiership player of the season. 46 turnovers (yes, 46, that’s not a typo) and nine tries tell a story of flanking excellence from the Wasps wonder – a player that imposed his physicality on every team he faced. At 6’3” his lineout work will be a blessing at international level and it’s not unthinkable that he will be a Lions Test starter in South Africa in July 2021. Also considered were Steven Luatua (Bristol Bears) and the excellent Dave Ewers (Exeter Chiefs), but our final choice of Willis was the easiest of all to make.

Time for a bit of #MondayMotivation 💪

5 Jonny Hill (Exeter Chiefs): The “Ludlow Lampost” towers above his nearest competition as his personal development continues. 10 tries for a lock is quite an astonishing tally and at 6’7”, Hill is one of the slickest lineout operators around, as well as being a powerful force in the rolling maul. He has bolted on immense physicality and some abrasive work in the loose to silence those that considered him lightweight in the engine room. He sees off the solid but less spectacular claims of David Ribbans (Northampton Saints) and Charlie Ewels (Bath).

4 Maro Itoje (Saracens): There is no more complete forward in world rugby than magnificent Maro. He’s like a suffocating cloak on the field, enveloping everything in front of him and seemingly all over the pitch, with his speed over the ball quite breath-taking at times. His jackal and tackle counts are always strong, but his disruptive value is the best of the lot. Absolutely peerless and he sees off two fine second-rowers in Joe Launchbury (Wasps) and Jonny Gray (Exeter Chiefs), his closest competitors.

3 Harry Williams (Exeter Chiefs): All the best groups have top quality road crew and, in both appearance and job description, the tattooed tighthead Williams ticks all the boxes. His massive frame shifts tonnage all day long, but when the time is right, he can let rip with a solo effort like no other prop around, as evidenced by his five close range tries this season. Surprisingly overlooked to go to the Rugby World Cup in 2019, his battle for the England number three jersey with runner-up Will Stuart (Bath) will demonstrate the depth Eddie Jones has at his disposal. Evergreen John Afoa (Bristol Bears) completes our nominations in a season where the veteran shone.

2 Tom Dunn (Bath): A ridiculously tight call sees the Bath hooker’s tackle count, lineout dependability and support play see off strong claims from Exeter’s Luke Cowan-Dickie and England incumbent, Saracens’ Jamie George. Dunn, alongside Stuart and Ben Obano, has terrified every front=row he’s encountered this year and his will to win, technical excellence and high rugby intellect sees him get the nod in a season Bath can rightly be proud of.

1 Ben Obano (Bath): The rumbustious figure of Obano fuses powerful scrummaging with deft handling and peerless mobility. Eddie Jones is said to be enthusing to all that will listen over the loosehead’s ability and he looks sure to challenge for international honours. In another season, Exeter Chiefs’ Alec Hepburn may well have got the nod, especially considering his improvement in the tight, whilst the great Mako Vunipola still sets the standards for others to follow over at Saracens.