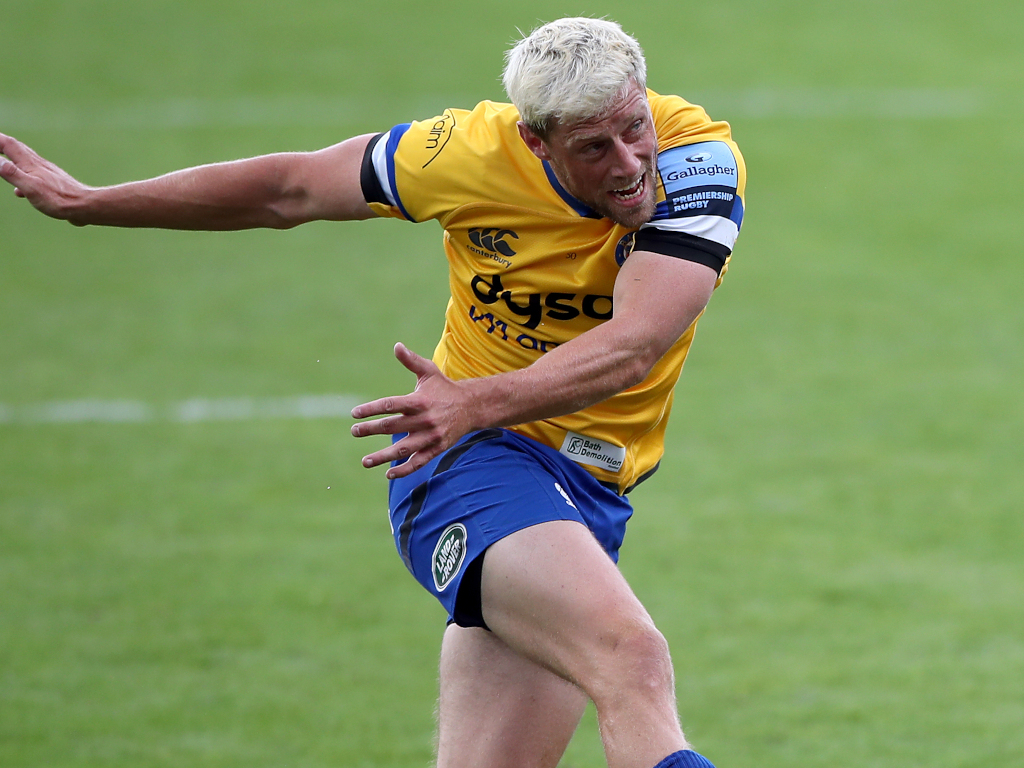 Bath moved into the play-off places at the expense of Bristol Bears after a mightily impressive 37-22 triumph over Sale Sharks at the AJ Bell Stadium on Sunday.

Sale went into the weekend in second but this result, combined with Wasps’ triumph over Bristol, means that the Sharks slip down to fourth with the Bears a place behind.

That would be reduced early in the second period as Jean-Luc du Preez touched down before AJ MacGinty added a three-pointer, but Bath were clinical and effectively sealed the win via successive Priestland penalties and Spencer’s second try.

Dan du Preez did briefly give the Sharks hope of a losing bonus-point but Jonathan Joseph went over late on to seal the full five for the visitors.

Despite the end result, it was the Sharks that began the brighter in Salford, going 7-0 ahead with just three minutes on the clock.

Since regaining his place in the XV from Rob du Preez, MacGinty has been superb and the USA international was the architect of this score. The fly-half dummied, got his hands free and found the rampaging Janse van Rensburg, who shrugged off the attentions of several would-be tacklers to touch down.

Sale continued to control matters and had the opportunity to extend their buffer, but MacGinty’s penalty attempt was wide and they would pay for that profligacy.

With their first real attack, the visitors constructed an excellent score as they moved the ball through several phases. Wide passes over the top of narrow Sharks defence kept them on the front foot and McConnochie eventually burst through to cross the whitewash unopposed.

Ruaridh McConnochie is at it again! 🔥

The West Countrymen were also proving effective in the maul and their pressure forced Jono Ross into a cynical infringement. The captain was sin-binned for a trip and, from the resultant three-point attempt, Priestland moved Hooper’s men into the lead.

With their opponents down to 14 men, the visitors took advantage and manufactured another try as a bullet pass sent Joseph clear. The England man chipped over the top and Spencer was the player to grab hold of the ball and touch down.

It was thoroughly deserved and a lead they would take into the interval, but they were thankful to a brilliant last-gasp tackle from McConnochie. MacGinty and Tom Curry had combined brilliantly with the former looking set to score, but the England hopeful enhanced his reputation by scything down the pivot.

Hooper was looking for more of the same from his side and they continued to defend valiantly in the face of some gargantuan Sale units, but they were beginning to come under pressure.

Faf de Klerk was getting a supply of quick ball and the hosts thought they had scored through Marland Yarde, but play was brought back following a forward pass by Akker van der Merwe.

Despite that rearguard effort, Bath were eventually breached as the Sharks once again went through the phases. Replacement Dan du Preez made a significant incursion before his brother finished the move after MacGinty had sent him through a gap.

Sale’s pivot missed the conversion but was successful with a three-pointer moments later to reduce the arrears further. However, Priestland almost immediately restored Bath’s buffer with one of his own off the tee and then slotted another to increase their lead to eight.

With Rob Webber yellow carded for the cynical indiscretion which led to that penalty, the West Country outfit were in command and they secured a hugely impressive victory when Spencer intercepted Yarde’s pass and touched down.

Dan du Preez did go over late on for the Sharks but it proved to be mere consolation as Bath deservedly had the final word through Joseph.

Just the 9️⃣4️⃣ points, then.

In the early game, Wasps continued their charge towards the Premiership play-offs by crushing title rivals Bristol 59-35 at the Ricoh Arena.

Bristol boss Pat Lam made 12 changes from the team that beat Northampton five days ago, seemingly with one eye on next Friday’s European Challenge Cup quarter-final against the Dragons.

Jimmy Gopperth added three conversions, and there was no way back for Bristol as Wasps made it nine wins in their last 10 Premiership games.

Fly-half Max Malins, meanwhile, dominated Bristol’s scoring, posting two tries and kicking four conversions for an 18-point haul, while centre Piers O’Conor also touched down and there was a late penalty try and Peter McCabe score as they claimed a losing bonus-point.

Back on the winners list with a hard-fought, entertaining victory over our biggest rivals! #LEIvNOR 🐯😇 pic.twitter.com/aFC5ZundiO

Another fly-half, Zack Henry, was Leicester’s hero with 20 points as the Tigers edged out local rivals Northampton 28-24 at Welford Road.

He also added a drop goal to ensure his side avenged a 36-13 defeat at Franklin’s Gardens back in November. Freddie Steward scored Leicester’s other points with a penalty.

Northampton outscored their opponents three tries to one, Paul Hill and Henry Taylor crossing in the second half to go with a first-half penalty try, while Dan Biggar kicked a penalty and two conversions.

However, they still crashed to a sixth defeat in seven matches since the resumption after failing to take advantage of Tigers’ three yellow cards.

Elsewhere, Ollie Lawrence came off the bench to score two tries as Worcester Warriors powered their way to a 40-25 victory against London Irish in what was a clash of two out-of-form teams at The Stoop.

The Warriors had only won once in the Premiership since the turn of the year, but they were the dominant force at the Exiles’ temporary home, where they ran in six tries.

Two of those went to South Africa scrum-half Francois Hougaard, who was the class act in helping Worcester come back from a one-point half-time deficit and inflict upon Irish their ninth straight defeat. Melani Nanai and Tom Howe added the Warriors’ other tries in a much-needed win.

Fantastic second half performance from Saracens who extended their lead by 25 points in the second half to beat Exeter Chiefs 40-17 ⚫️🔴 pic.twitter.com/8SdufPaQX8

Finally, Saracens avoided falling to their worst run in the Premiership for three years by dispatching Exeter 40-17 in a mismatch lacking the fireworks of recent collisions.

Any meaning to the Premiership’s fiercest rivalry vanished when two under-strength teams were announced for a fixture that in other circumstances would have produced high drama and a host of intriguing sub-plots.

But with both clubs in Champions Cup quarter-final action next weekend, Exeter 12 points clear at the league’s summit and Saracens long-since relegated for repeated salary cap breaches, it was robbed of its box office appeal.

Instead they battled for squad bragging rights that came out emphatically in the double winners’ favour as Rotimi Segun, Dom Morris, Elliott Obatoyinbo, Janco Venter and Cameron Boon crossed for tries.

It prevented Saracens from slipping to a third consecutive top-flight defeat – a sequence they last experienced in 2017 – and crashing twice to the Chiefs this season after going down 14-7 in a stormy showdown at Sandy Park in December.