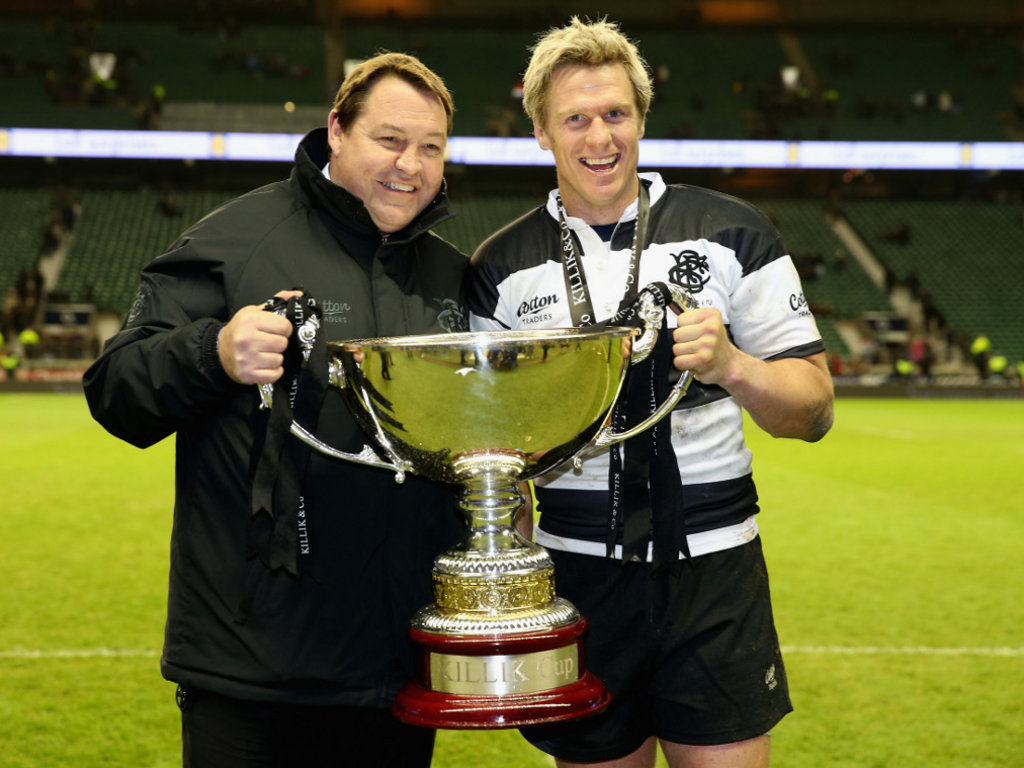 The Barbarians outclassed Fiji 43-19 in an entertaining match played in front of a near 70,000 crowd to mark the Islanders' centenary.

The Barbarians outclassed Fiji 43-19 in an entertaining match played in front of a near 70,000 crowd to mark the Islanders' centenary.

It was a match played in great spirit, with both teams exhibiting the running rugby craved by the Twickenham supporters, and some of the game's greats showcasing their silky handling and offensive prowess.

The onrushing Matawalu gathered and danced his way round several defenders before offloading to Asaeli Tikoirotuma who cruised in under the posts to open the scoring. Bai knocked over the simple conversion.

The Barbarians proceeded to dominate the next fifteen minutes, with virtually all the play inside the Fijian 22, and the Islanders infringing time and again.

Steve Hansen's side gained the upper hand in the set-piece, and efforts from Bismarck du Plessis and Matias Diaz were denied after referral to the TMO.

The Fijian defence – not unlike their sevens counterparts who so comprehensively outplayed New Zealand in Dubai earlier on Saturday – was aggressive and quick to pressure the Barbarians, but their resistance was finally broken when du Plessis powered over from close range. Lambie failed with the conversion from out wide.

From the resultant kick-off, openside Mala Ravulo paid the price for his team's indiscipline, tackling an opponent in the air, and was shown a yellow card by Pascal Gauzere.

And despite the subsequent wave of pressure from the BaaBaas, Fiji held firm, and continued to look to play fast, high-tempo rugby. They welcomed the flanker back onto the field with the scores still 7-5 in their favour.

But a quick tap on their own 22 proved to be their undoing, as the ball was spilled, and Springbok number eight Duane Vermeulen scooped up to stroll under the posts for one of Test rugby's more surreal tries. Lambie, this time, could scarcely miss from straight in front, and added the extras for a 12-7 lead approaching half-time.

The BaaBaas still had time to build upon their lead, however, and a driving maul saw du Plessis barrel over for his second of the game, continuing the South African scoring theme. Lambie's conversion drifted wide of the mark, and the teams went into the break with score 17-7 in favour of Hansen's charges.

Scrum-half TJ Perenara spilled the ball from the kick-off, but his pack bailed him out with a monstrous scrum against the head, catching the Fijians cold, and allowing substitute Willie le Roux to race away up the right-hand-side.

The break came to nothing when Frank Halai spilled possession, but the TMO was called for again as Perenara hacked through into the in-goal area, but the covering Sam Speight got hands to the ball before Vermeulen.

Du Plessis' last act was a powerful burst up the left touchline, but the tries kept coming for the BaaBaas.

A cross-kick from le Roux found All Black Charles Piutau on the 22, who spun beautifully out of one tackle before cutting inside to touch down under the posts, and kill off any lingering hopes of a Fijian comeback.

Just three minutes later, a break and offload from the outstanding Steven Luatua released Springbok skipper Jean de Villiers to dot down in the corner. Lambie made the touchline conversion to bring the scores to 31-7.

With the game well out of sight, the Barbarians turned on the style with some considerable aplomb, and notched what proved to be the try of the day.

Glorious offloads from le Roux, de Villiers and Burger splintered the Fijian defence and had the crowd purring as Tom Taylor finished off in the corner.

The Twickenham supporters were brought to the feet again in the closing stages, as play swung from end to end, and possession changed hands time and again.

This time, it was the Fijians' power and handling abilities that won through, as Henry Seniloli finished off a great counter-attack.

Vermeulen was yellow-carded in the build-up for a nasty high tackle.

The BaaBaas thought they had the final say, when a delightful Lambie chip set up team-mate de Villiers to gather under the posts and bring up 40 points for the composite side.

But, fittingly on their centenary, Fiji broke away with the final score from Alex Rokobaro an fine end to a fine occasion.

Man of the match: Plenty candidates for the Barbarians, with Matawalu sticking his hand up for the Islanders, but Steven Luatua gets my vote for a superb all-round performance. Devastating in attack and defence, thriving in both the tight exchanges, and when the game began to break up.

Villain of the match: No villains today, but Vermeulen's high shot was cynical and unnecessary late on.

Moment of the match: Great tries all-round, but Piutau's fine gather, spin, and finish ended the match as a contest.