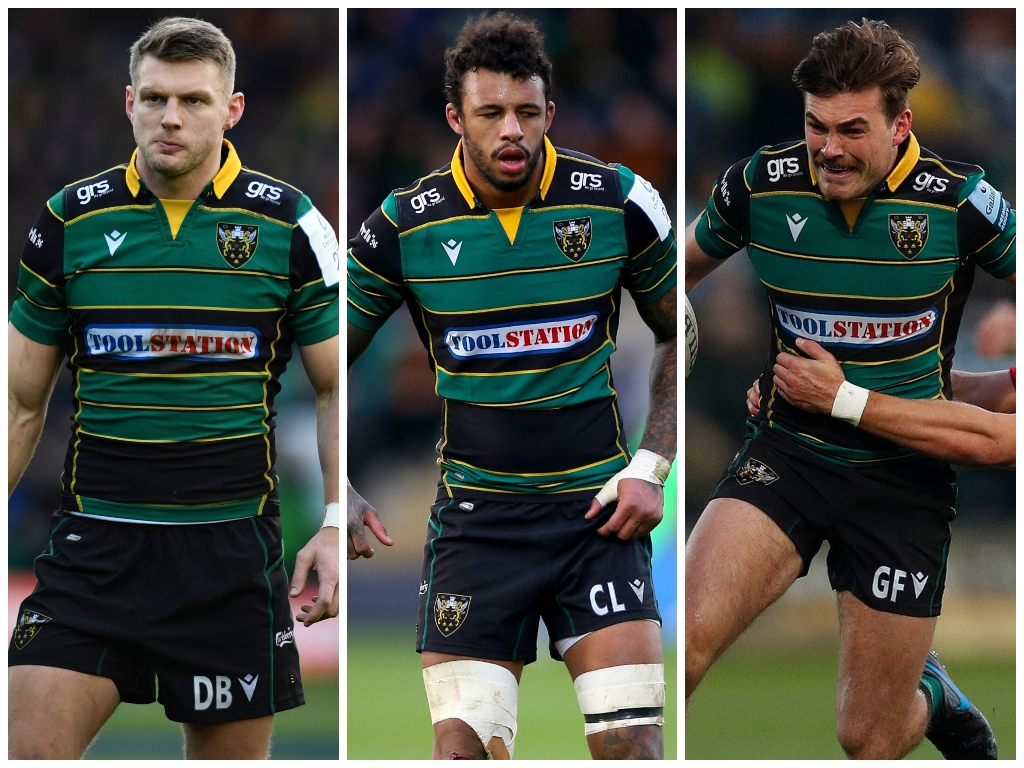 With 35 points from 13 matches, seven wins and six losses, Northampton are treading hot on the heels of the big three of Exeter, Sale and Bristol, but are the only team in the top five that have a negative points difference.

In truth, the last portion of Premiership action was a horror show for Saints as they won only one from their last five games, losing three consecutive home matches against Sarries, Bristol and Irish. A 57-7 thrashing at Sandy Park was a reality check for their aspirations and only a narrow win away at Worcester in the final round before lockdown gave them anything to smile about.

They play one of the most expansive games in the Premiership, led by the structure of head coach Chris Boyd and augmented by the vision and creativity of attack coach Sam Vesty. Their game is based upon empowerment and heads up attacking rugby. However, despite being right up there in terms of carries and passes, their discipline is clearly something of an issue, as they lead two of the most unwelcome stats columns – that of tackles missed and penalties conceded.

All of this alludes to the pace of the game they commit to and their simple ethos that they’ll score more points than their opponents. However, for things to move forward for them to consolidate their top four status, more work is needed on both defence and on discipline.

A feature of Saints’ recruitment is the resources that they’ve created within an excellent and recently restructured academy system and it’s refreshing to see four youngsters getting full-time contracts from within the community.

Connor Tupai is a massive scrum-half who resembles his namesake Conor Murray in the nine shirt. Powerful breaks, electric pace and a big boot characterise his game and with Cobus Reinach departing Franklin’s Gardens it’s essential the youngster steps up to provide back-up to Alex Mitchell.

Nick Isiekwe may have had a horror show in international rugby thus far, but no back five forward wins more lineout ball nor is easier to get up high to steal.

Elsewhere, nobody doubts Nick Auterac’s power but he needs to learn to apply his physical attributes into playing outcomes if he’s to fulfil his potential.

The big news here is the departure of one of the finest players to ever grace Premiership Rugby, Springbok Cobus Reinach. The diminutive scrum-half has lit up Franklin’s Gardens with his pace and vision for some three seasons, scoring 29 tries in 70 appearances but he heads to Montpellier in search of silverware in the Top 14.

Ben Franks’ solidity at loosehead has been punctuated by injury woes and he retires, whilst flanker Jamie Gibson, a consistent performer and regular in the first-team squad for the past five years, notching up more than 30 matches in a single season twice, will leave at the end of the season but has recently agreed to stay on board for a further three months to plug the hole left by Tom Wood’s tragic illness, giving the former England flank time to recover properly.

"If that doesn't represent the true joy of rugby, I don't know what will!"

Four very different teams all capable of winning the title 🏆@SquidgeRugby breaks down why the #PremRugby top-four battle is like none we have seen before 🙌#RugbyRestart | Friday, 7pm | BT Sport 2 HD pic.twitter.com/NppMN3zoJE

Saints will miss Reinach hugely; the heartbeat of the team and arguably the most dangerous runner in the Premiership and it’s essential that Mitchell and Tupai carry on where he left off. Much of their hopes will rest upon a significant improvement in their defence and a greater attention to detail at ruck time, to reduce the number of penalise they give away under pressure.

Whilst they’ve recruited wisely, it is worth also mentioning the enforced absence of England stalwart Wood, who has suffered a blood clot on his lungs; his peerless lineout work and abrasion at the breakdown will be missed. Wood is determined to play again but cannot do so yet because of his ongoing treatment, but has targeted October for his return to play target.

Four games at home should yield at least parity in terms of results and if Saints target two more wins at Gloucester and Leicester, they should, especially if they improve their points difference, be in the top four at the end of the season.

James Grayson follows in his father’s illustrious footsteps in the fly-half berth and adds a good deal of pace and some defensive robustness to the legacy he takes on. The 6’2″ England U20 star makes a habit of crossing the try-line and possesses great distribution skills, as evidenced by his ability also to play at scrum-half if needed. If his improvement continues, senior caps await him and it’s likely that he’ll follow the parental route into the full England side in the fullness of time.

24-year-old David Ribbans is one of the most complete young locks in the Premiership. As of June this year, he becomes available for England duty and it’s certain that his abrasion, lineout ability and try scoring record is very much at the forefront of Eddie Jones’ mind. But for the now, his focus will be on the Gardens, where his mobility and power has already netted an impressive 11 tries in 46 appearances, pretty impressive for a lump of 6’8″ and some 125kgs.

Saints vacillate between sensational and naive with equal measure. Often the architects of their own undoing through daft indiscipline, when on song they’re the most scintillating team to watch in the Premiership, with handling and total rugby from one to fifteen.

Whether or not they have the fortitude and mental toughness to dog it out to finish in the top four is moot, but if they get to the play-offs, they have the ability to beat anyone on the day and it’s not unthinkable to imagine them going all the way and we believe that they’ll be there or thereabouts to the last moment of the season.