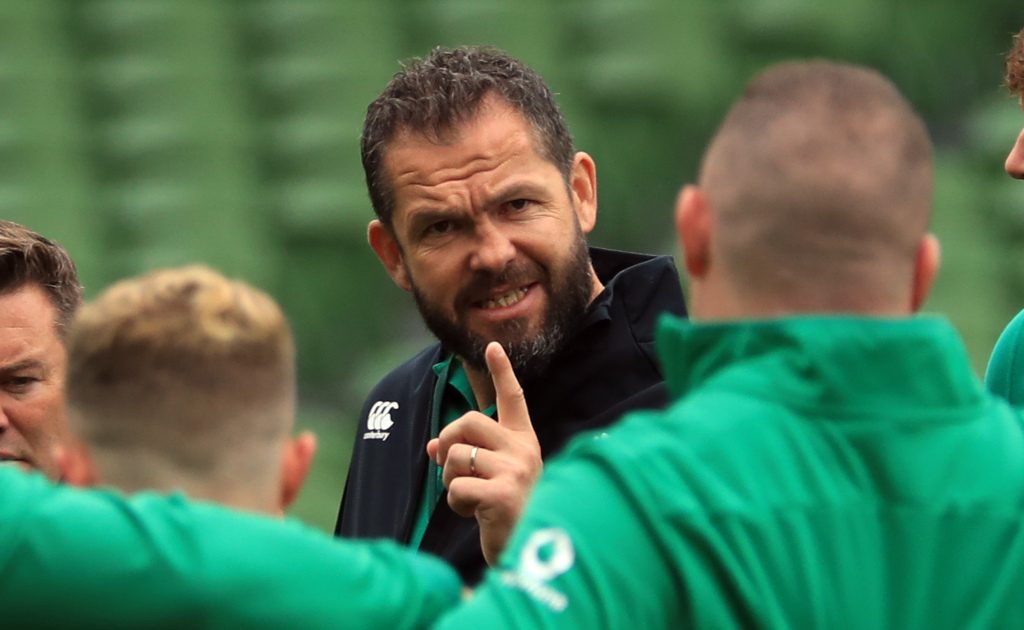 And with a three-test tour of New Zealand on the horizon next year – Covid permitting – this game is the first of four ahead of the next World Cup, a quartet of matches which will give a very clear pointer of progress over the next nine months and heading into 2023.

The place to be

Farrell is relishing the forthcoming challenge and thanking his lucky stars he and his charges have got the chance.

“This is where you want to be. We’re coming up against a different beast, we know that. It’s the challenge that we get excited about.

“Like it always has been, it’s a privilege, we’re unbelievably fortunate to get the opportunity to play them four times this year.

“We’ll learn a lot about ourselves this weekend and throughout the season and certainly learn a hell of a lot on the tour to New Zealand because that will be the ultimate tour really.

“It’s a privilege to play against the best, we should embrace that, walk towards it and keep pushing ourselves.”

Ireland opened their autumn campaign by producing arguably the best attacking display of the Farrell era, running in nine tries against an outclassed Japan team on the occasion of captain Johnny Sexton’s 100th cap.

This weekend’s capacity crowd will no doubt be eager to see a repeat of that scintillating display against the “masters” of expansive, free-flowing rugby.

Farrell, who has made one personnel change by recalling Iain Henderson in the second-row in place of fellow British and Irish Lion Tadhg Beirne, admits his side will have to be clinical to stand a chance of success.

“The one thing that has to happen against the best team in the world is when you get your chances you have to take them,” he said.

“There certainly won’t be as many chances as last week but we endeavour to play our game.

“We’ve got to make sure we play the game that’s in front of us and that’s all about decision-making.

“Of course everyone wants to play quick and the last few years it’s always been about transition on both sides of the ball.

“We’re playing against the masters at that type of game so we want to test ourselves against the best.”

Wing James Lowe and scrum-half Jamison Gibson-Park will face the country of their birth for the first time, while Bundee Aki played when Ireland beat the All Blacks for the first time on home soil, a 16-9 success in 2018.

Connacht centre Aki insists the Kiwis – who dumped the Irish out of the 2019 World Cup – are a “different kettle of fish” to three years ago.

“I try and approach it as just another match but it is a special occasion,” said the 31-year-old, whose children and parents still live in his homeland.

“They’re the number one team in the world and they’re the big boys in town and they’re the hard ones to play against, so everyone is looking forward to the challenge that’s put in front of us.

“2018 was important, it was a good day for us, for Irish rugby, but I think New Zealand is a different kettle of fish at the moment, they are improving every single year.

“They are getting better and better as they play every game.

“I can’t speak highly enough about how good they have gone as a group and as a team.

“It’s going to be a task that we have to go out and perform.”

It’s been four and a half long and disrupted years since Matt Scott pulled on a dark blue jersey in anger, but finally this Saturday his wait will be over – and against world champions South Africa, no less.

Scott last started for Scotland against Italy in Singapore in June 2017, coach Gregor Townsend’s first match in charge. He was a replacement against Australia a week later.

Since then he has suffered injury, form-drop-offs and then, like everyone else, seen his schedule hammered by the pandemic, but finally he has managed to convince Townsend to give him another chance in what is a huge game for Scotland.