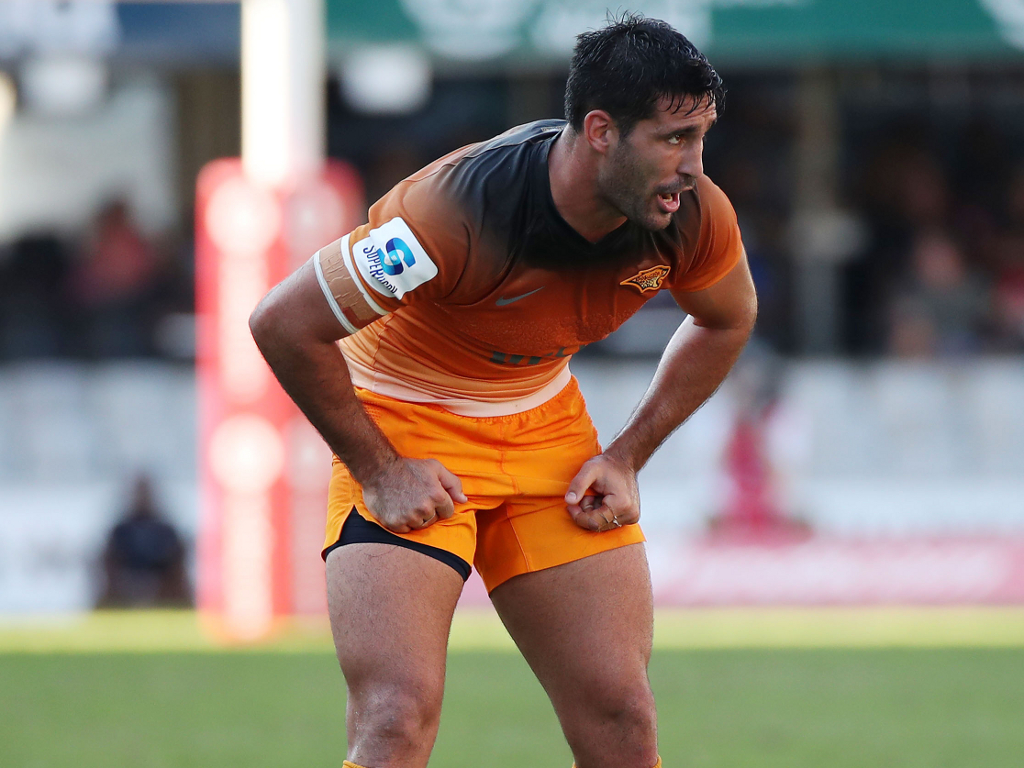 Our analyst Sam Larner returns to Planet Rugby and this week highlights how the Jaguares’ attack struggled to fire in the Super Rugby final.

The Jaguares had the second most points for and the fourth most tries across the 2019 season. On Saturday though they were held to just a single penalty as their remarkable rise ended in disappointment. How did the Crusades halt the attacking might of the team from Argentina?

The first thing to note is about attacking depth; if you’ve played any level of rugby it’s almost guaranteed that you will have been told to keep your depth. The reason for that is pretty simple; defences have very slow line speed at any level below the top three or four leagues and so there’s no need cut down your own space and put more pressure on your basic skills. However, when you play at a high level you can’t just keep getting deeper and deeper in attack because a good defence will keep catching you behind the gain line. Instead, you will often see teams getting flatter as they try and use footwork and passing to get just over the gain line. When you have punched through the line a few times you can then get deeper because you have neutralised the line speed.

The Jaguares tend to play with a flat attack with lots of things happening very close to the line. When this works, it really works because it doesn’t give the defence time to react to aggressive lines. When it doesn’t work it fails because they can’t get generate the power to get over the gain line. So how did the Crusaders stop this attack which has worked all season? 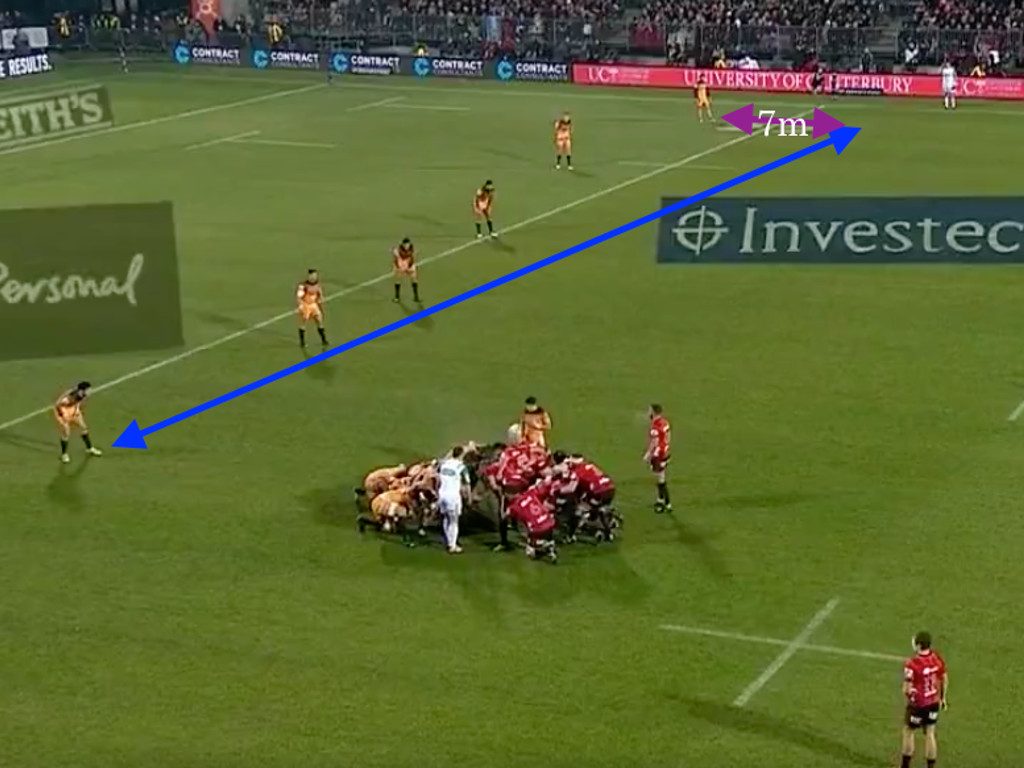 This is a clip from the first ten minutes and the Jaguares have an attacking scrum in their own half. Just look how flat the backline is, there’s just seven metres between the most forward player and the deepest player. You may normally expect to see the furthest wing stood in line with the fly-half for a possible cross-field kick but the rest of the backs would be deeper to the attack. The Jaguares line everyone up completely flat and attack from there. 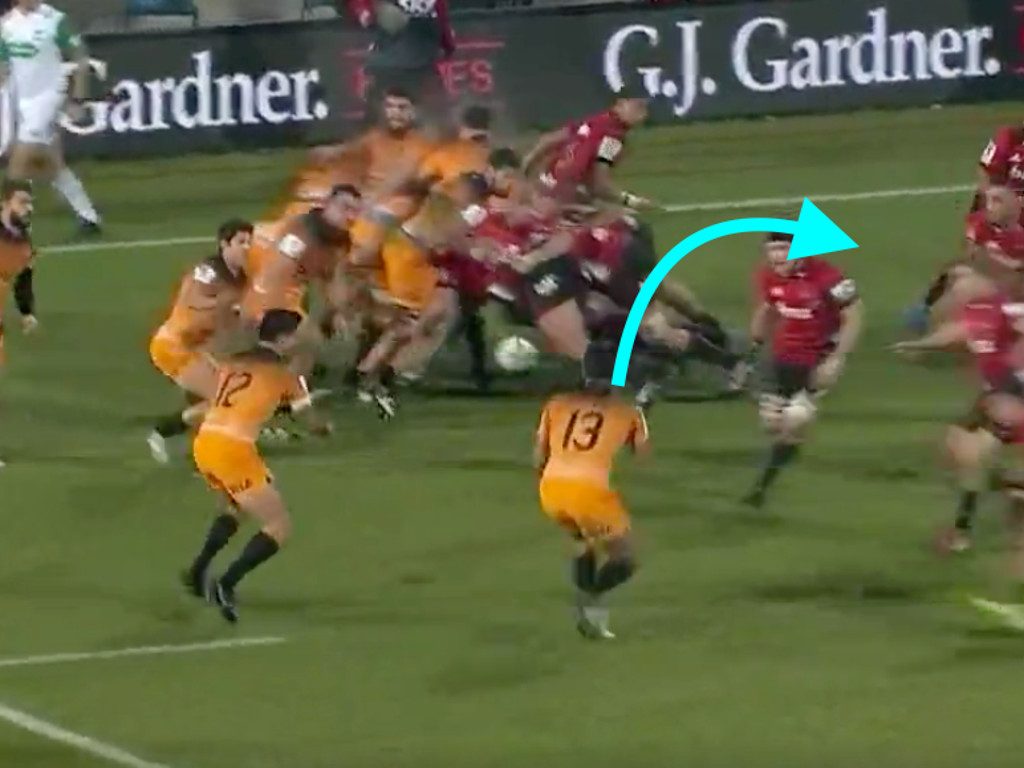 When it works, it really works and it leads to line breaks. The attackers can pick a line to attack and because it is so close to the defensive line it really doesn’t leave the defenders much time to react. That leads to line breaks and line breaks allow the attack to keep moving forward and to get flatter and flatter and keep driving the defenders back. Teams who play this flat really need individual excellence to get past the defensive line. 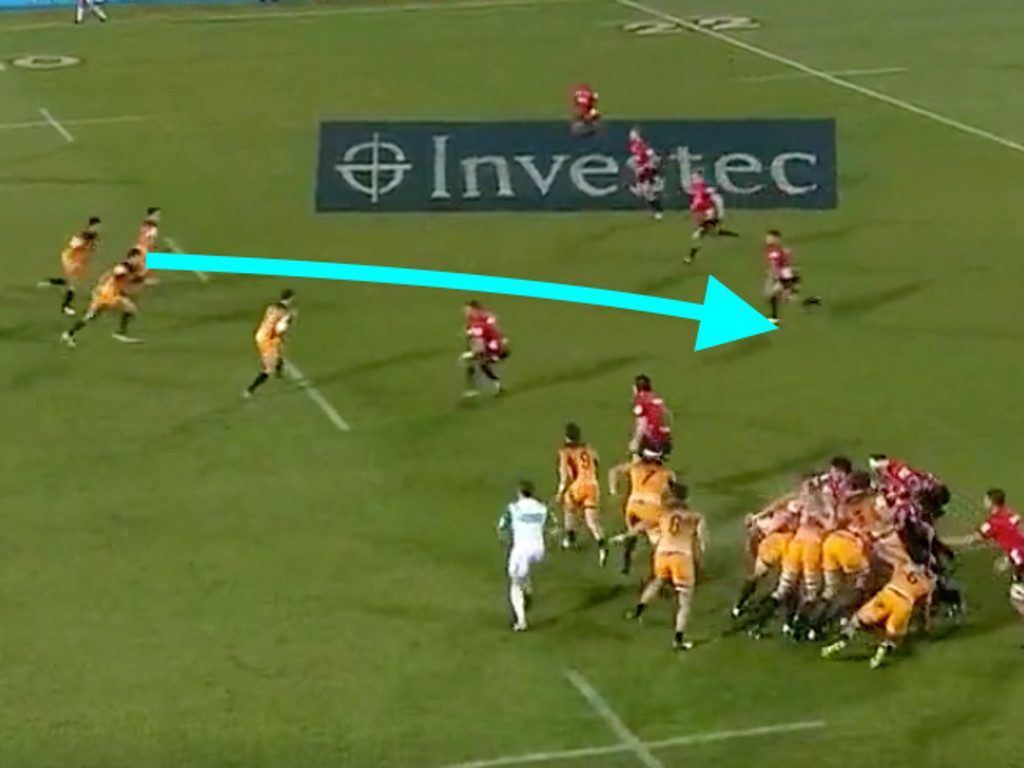 Flat attacks also put pressure on defenders to not make individual mistakes. When attackers are deep it gives the defenders time to make up for mistakes which they might have made, that’s not true when the attack is flat. In this example, a simple tip on pass is needed to put the Jaguares into space and through the hole left by the disconnected defence. 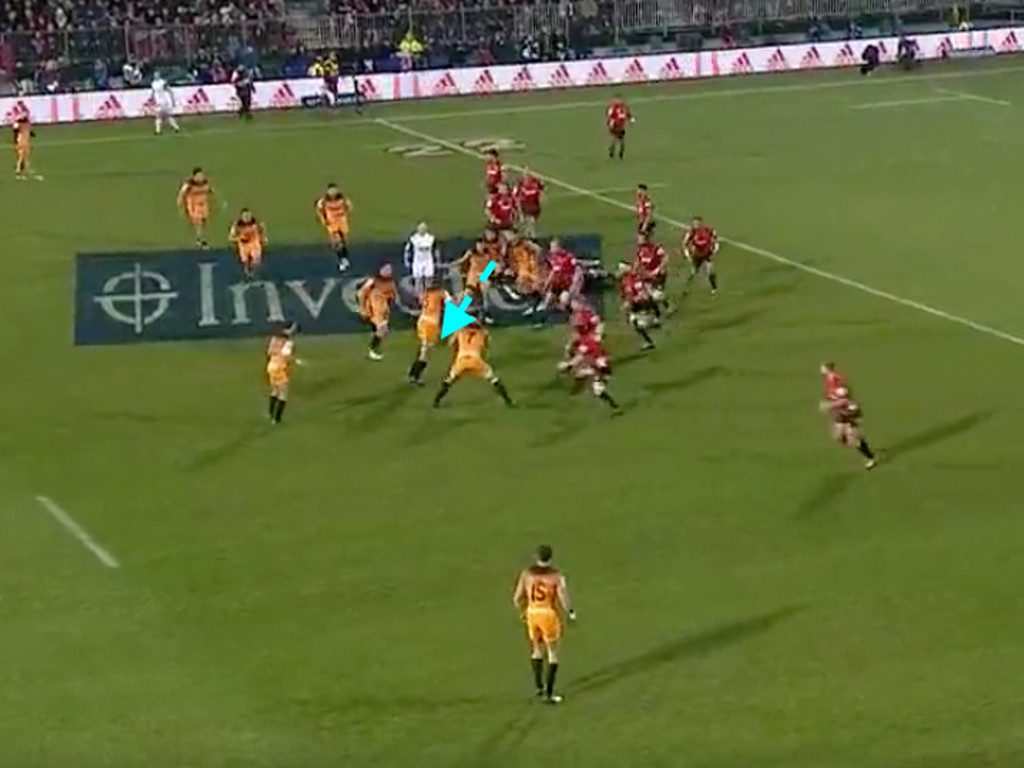 Of course there are downsides to this kind of attack. When the team isn’t breaking through the line it can completely stifle the attack. In this example there’s no other option apart from just to crash it up. If the ball goes out the back there’s nowhere else for the attack to go and it will likely just result in a loss of yardage. The defence know this and they just rush up and sack the pod of ball carriers behind the line. The attack has to restart but now they need to run backwards and restart their attack and naturally they will be flat. 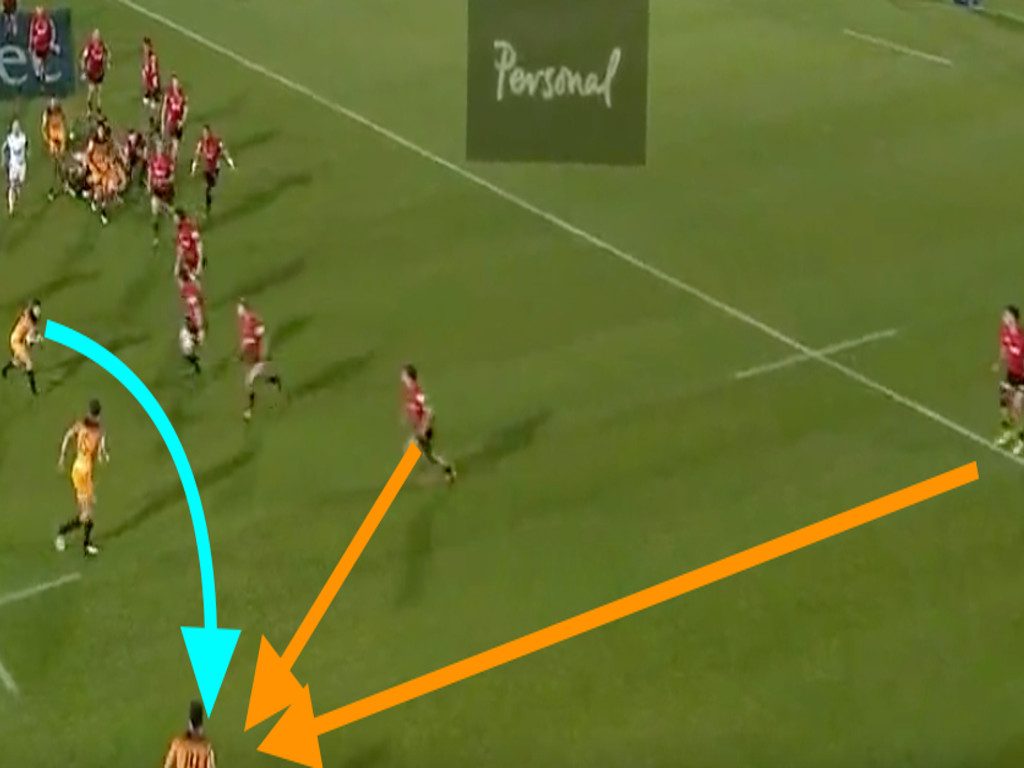 That leads to this, a lack of options for the ball carrier. If the carrier just tucks the ball and runs he ends up behind the gain line, if he passes it short the same thing, he can only spin it over the top but anything but a perfect pass and the Crusaders are behind the gain line. It’s amazing how swiftly the Jaguares run out of attacking options as their players either end up on the floor or ahead of play and not quick enough to track backwards. 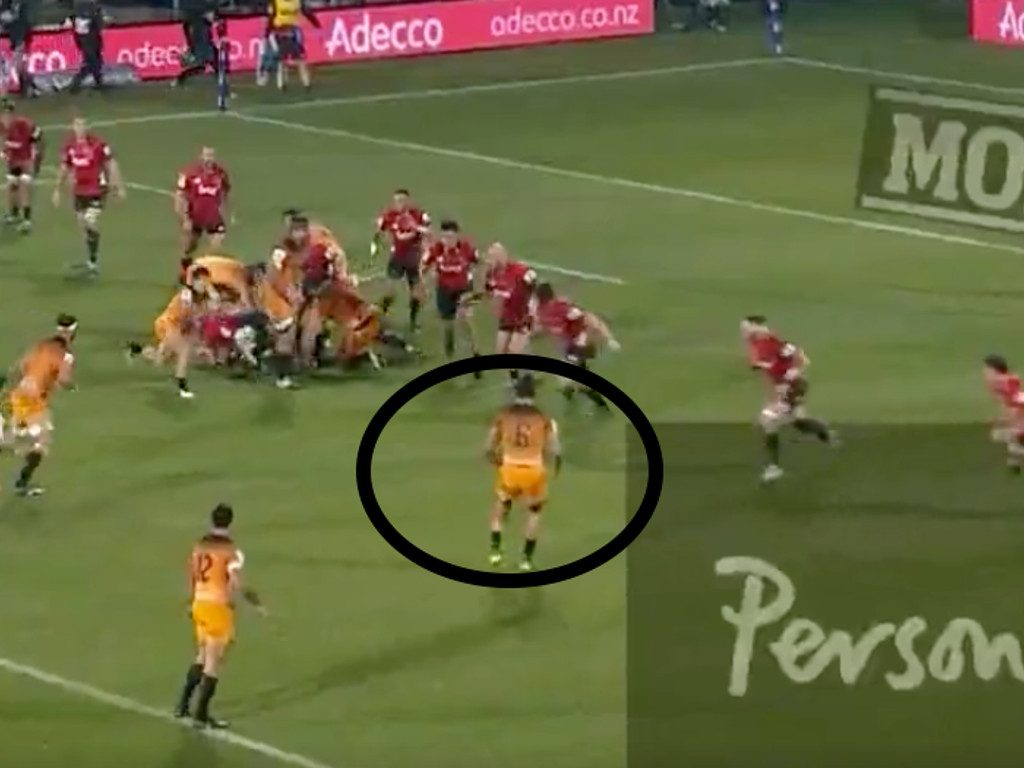 It’s important to remember that flat doesn’t mean static. The idea is that you generate your speed, hit a line and receive the ball flat. In this example the Jaguares’ ball carrier is simply stood still when he receives the ball. The Crusaders don’t need to do anything other than clue in on him and hit him as soon as he gets the ball. In this situation there really is no possible hope that you can get over the gain line when you receive the ball like this. A deeper attack encourages speed because you need to run forwards to catch passes and so you will be stressing the defence.

As the game progresses flat attacks can become lazy and won’t run forward onto the ball. That can become a wicked spiral; you get hit behind the line and need to work harder to get to the rucks which means you are more tired and so less willing to hit lines as the game progresses. When the Crusaders started to stop the attack it made it much easier to stop it further on in the game. 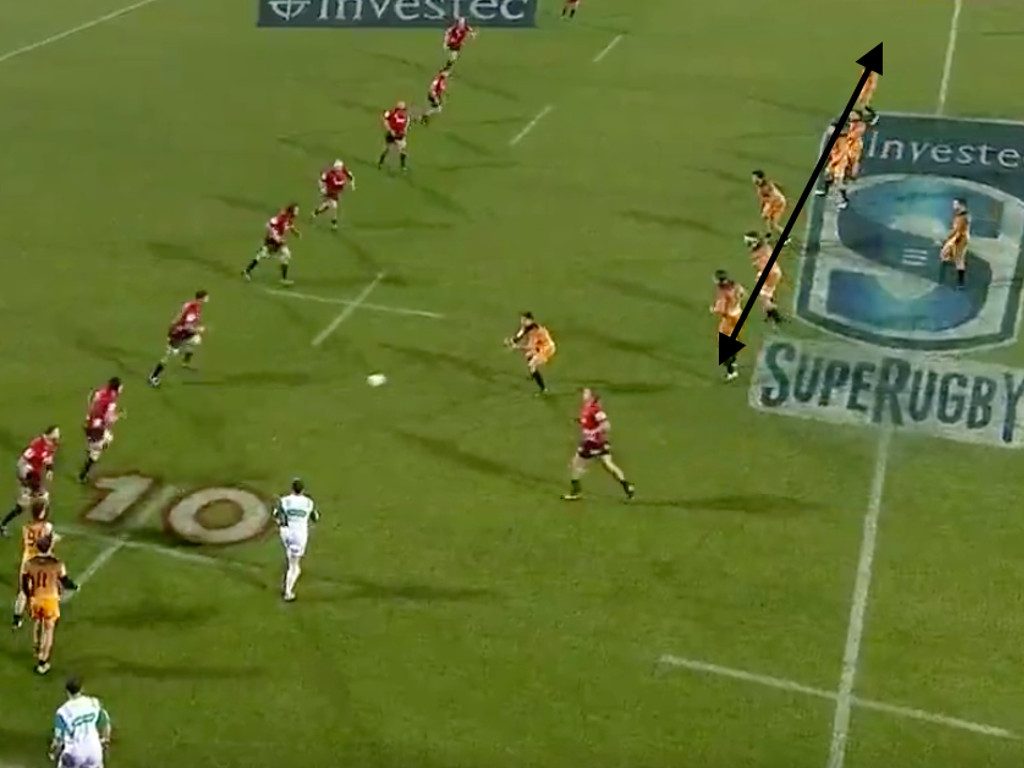 That spiral continued into the second half. The Jaguares’ first receiver is relatively deep but everybody outside of him is completely flat. The Crusaders don’t make a defensive mistake and just calmly get off the line and close down the space. The Jaguares once again get hit behind the line, their players need to work harder to get back and secure the ruck and set up the next phase. That takes energy and that puts them in even more of a hole as the game progresses.

The Crusaders knew what to expect when they faced the Jaguares. They were going to play a team who set up their attack to be very flat. The Crusaders would be in difficulty if the Jaguares managed to hit their stride and perform some exceptional footwork and individual skills. They would also be in difficulty if they made defensive mistakes and created holes for the Argentines to slip through. They also knew that if they stayed compact and got off the line quickly they would stifle the Jaguares attack.

I fully expect Argentina and the Jaguares to do the same thing again later this year and in 2020. Teams will be better prepared but the fact is that if you put defenders under pressure they will make mistakes and those mistakes will be punished by a flat attack. However, those attacks do rely on mistakes, if defenders don’t make mistakes then the attacks can just burn out. They get flatter and flatter hoping for a mistake but when those mistakes don’t happen, or don’t happen often enough, your attack can end up with individual runners from a standing start, getting hit behind the line, and a tiring XV just trudging backwards.