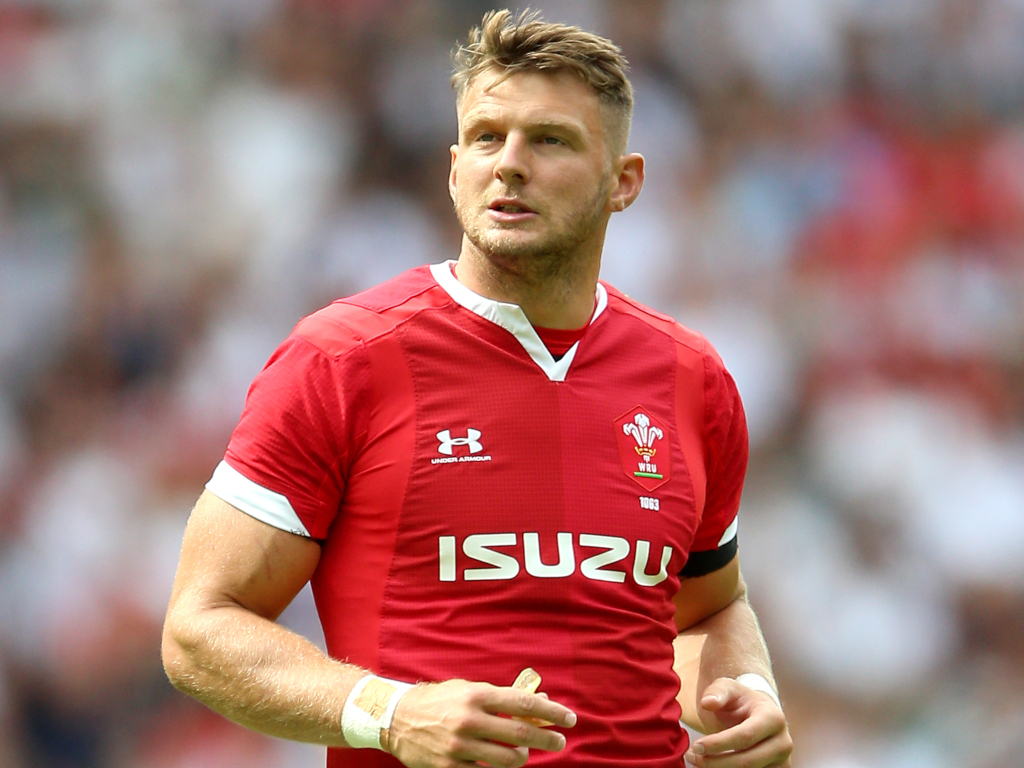 Our analyst Sam Larner returns to Planet Rugby and this week studies the kicking duel in Cardiff and how Wales will approach the World Cup.

Modern rugby is, in large part, a battle for air superiority. The defences of today are fitter and better drilled than at any point in history. Gaining yards through a defence as dominant as those we see now is exceptionally hard. It used to be that there was a golden number of phases you could get to which would unlock defences. That is still the case in low level rugby, typically defences will open up if you get to six phases and that number increases as you go up through the leagues. Of course, at the professional level there are numerous incidents a season of teams breaking 25 phases, sometimes even 40, but where the possession ends in a penalty to the defence or another turnover.

Now, you might think that that’s no big deal. Obviously teams don’t want to turn the ball over but so what if they do? Turnover ball presents the defence with a broken field to attack. As the number of phases increases, the risk of a turnover increases as well. The last thing you want to do is smash away at a set defence only to turn the ball over and find yourself charging back down the field after a team who has just easily picked off your broken defence.

So what is the solution? Attack coaches have currently settled on kicking the ball to compete. ‘Kick tennis’ might get a bad rep but it opens up the field. When hefty forwards need to sprint back and forward after a kick they get tired and when they get tired they leave gaps and when they leave gaps it’s time to stop kicking and start running the ball.

When Wales played England on Saturday the teams combined to kick 59 times. To put that into context that was the most of any game on the weekend. That is also 10 more than the total number of missed tackles during the game. How did England and Wales fair when the ball was sent skywards? 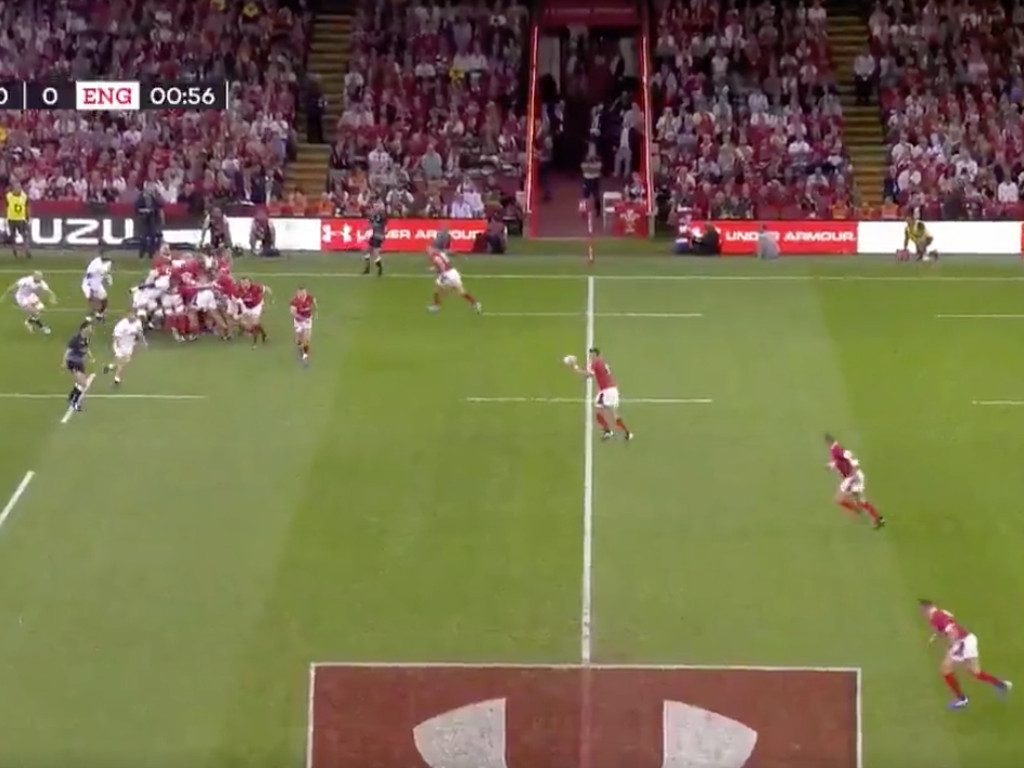 This is less than a minute into the game. Wales are just inside the English half and the game plan is simple; hoist up a high ball and aim at Elliot Daly. More on how Daly dealt with the kicks later on. 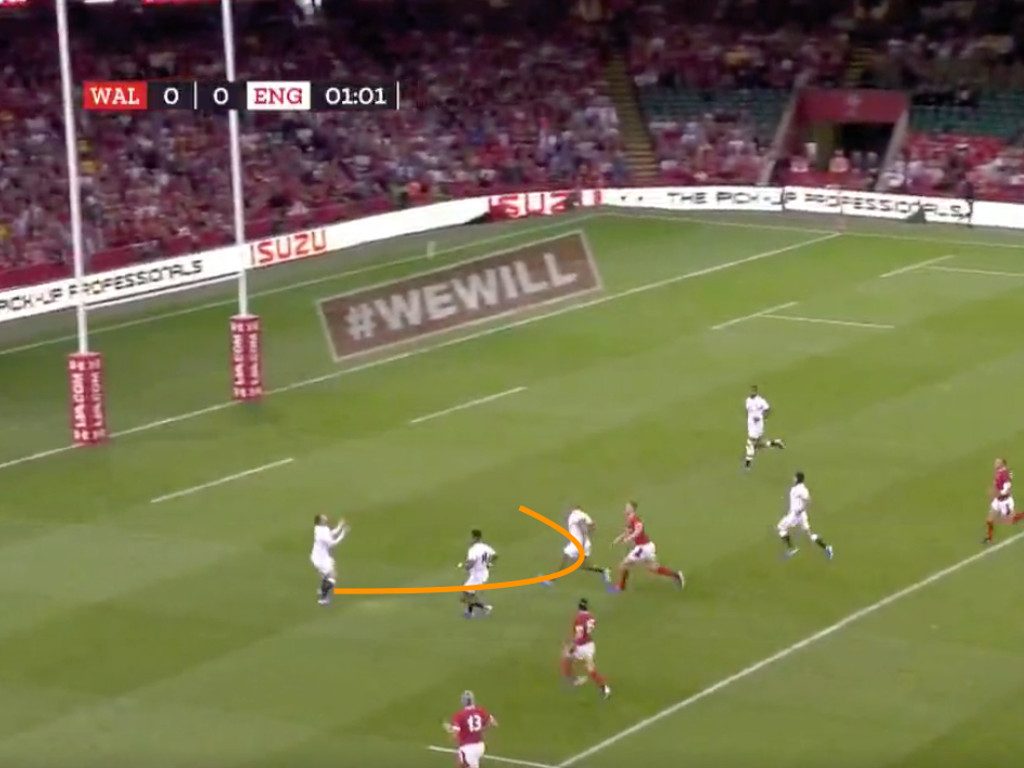 The kick is too far and Daly has a comfortable take inside his own 22 where he can make a mark. Look though how Anthony Watson and Jonathan Joseph converge to shelter Daly from the Welsh chase. It’s not egregious enough to get a penalty, and frankly it’s just good play. Daly knows that he won’t have Welsh players in his face as he leaps to make the catch. First up, advantage England. 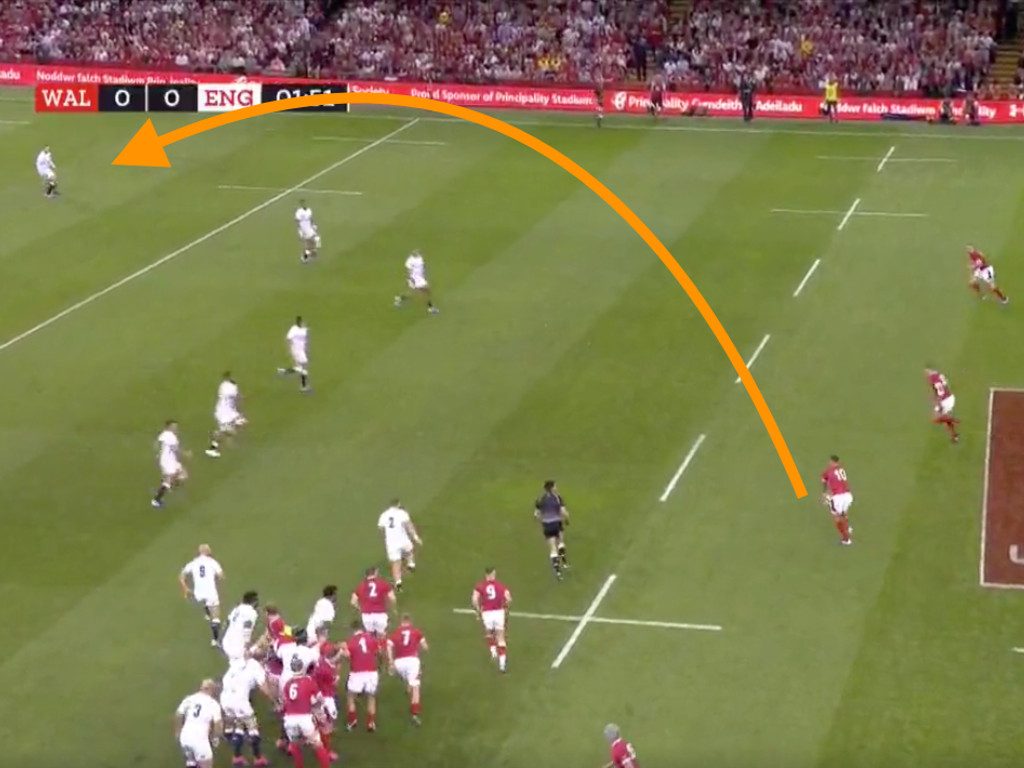 The very next play Wales are at it again. Biggar is aiming for Daly but this time with a cross-field kick. What is interesting is how England defend this situation. Daly is covering the far half of the pitch with Watson defending the near half. We would typically expect the far wing to drop back and the full-back to cover the centre of the pitch.

Perhaps anticipating that Joe Cokanasiga is not best served taking high balls he is dropped into a half position where he can rush up if the ball goes wide or move back if the kick comes in. This is an insight into the amount of work that goes on behind the scenes in the build up to a game. Rather than asking players to do a job because of the number on the back of their shirt, they now try and create situations for players to achieve their best. 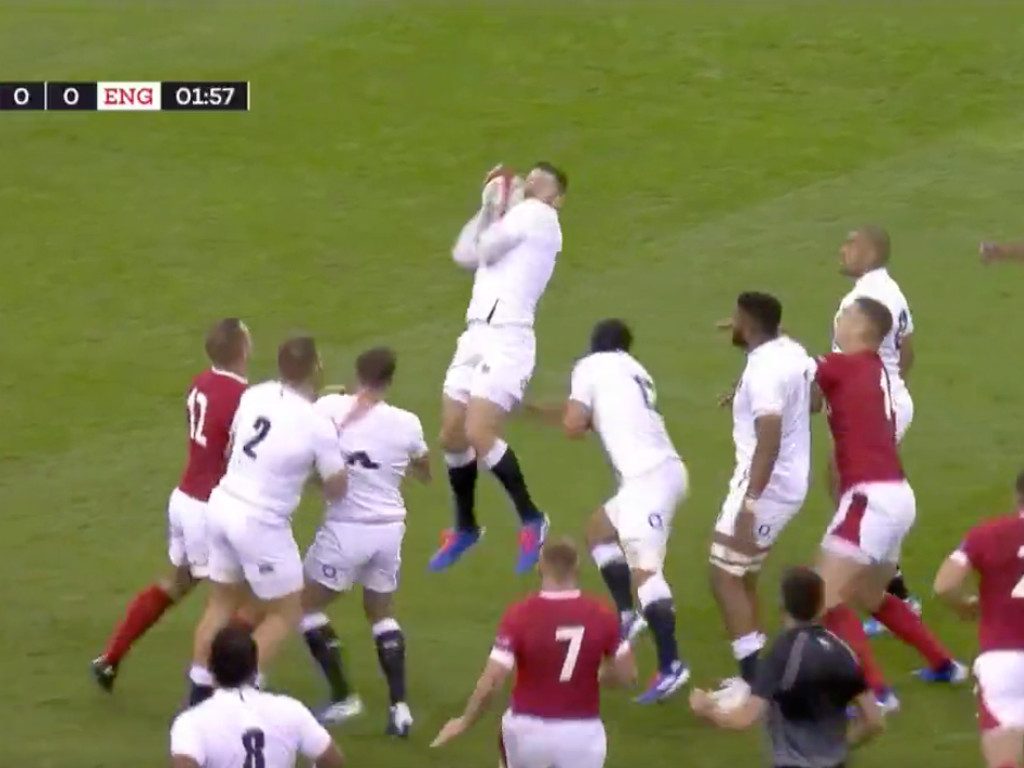 Once again the kick is too far and although Daly has to take the ball under more pressure than he would ideally he still makes a safe catch. Look again for the wall of white shirts protecting him from the chase. One note of caution though if you want to implement something similar in your pre-season training, if the ball hangs up in the breeze you can find that rather than providing a helpful block you actually create a barricade that your own player has to fight through. 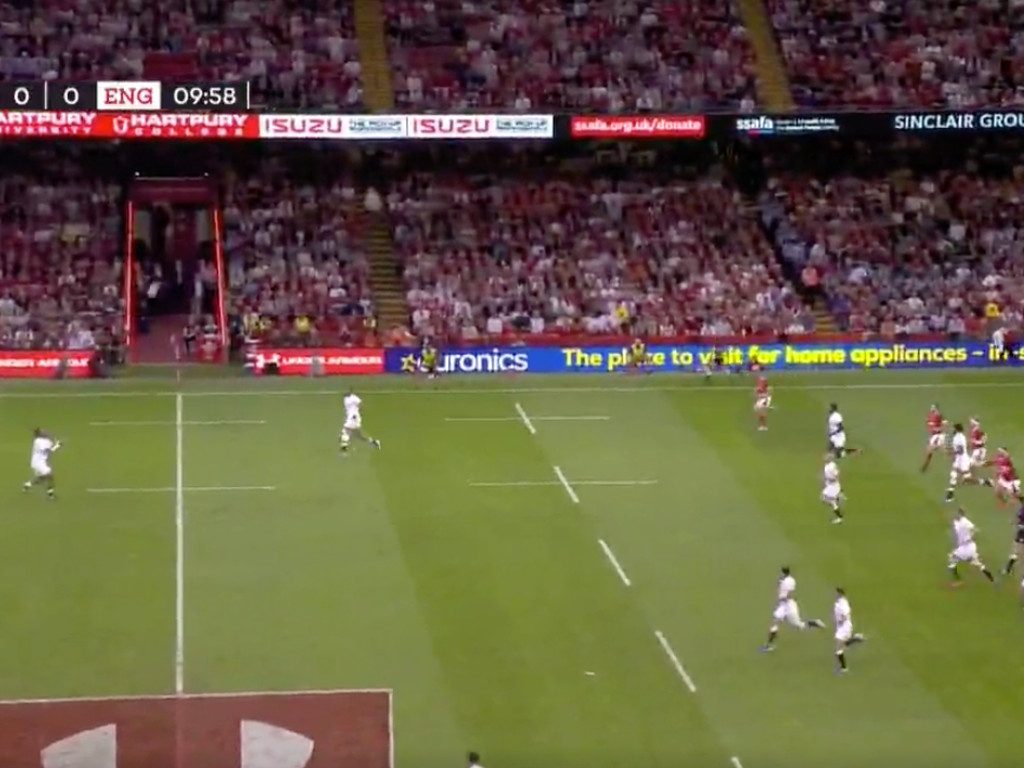 Biggar wasn’t the only Welsh player tasked with kicking. Gareth Davies was also hoisting high balls from the back of rucks. This example highlights the perils of kicking from your own 22 and keeping the ball in play. If you are in your own 22 the defence can afford to drop players into the backfield to cover kicks. That does mean that there is more space for an attack from distance and in fact Wales launched their own attack from deep later in the game rather than kick to a stacked backfield. Obviously the risks are higher and so teams still overwhelmingly decide to kick in this situation. Davies’ kick is too long to compete but stays in the field. Billy Vunipola gets a run up and breaks two tackles before Wales bring him down. 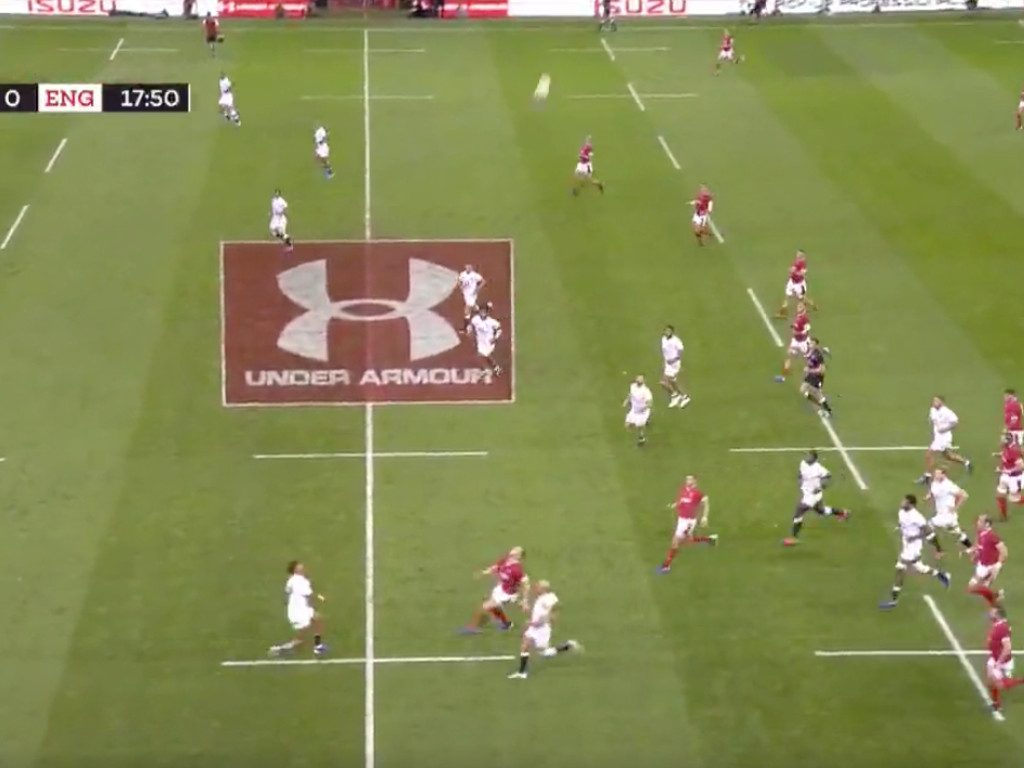 Davies launches another high kick, this time to compete. Watson ends up knocking it on but look at how much space is opened up by a simple kick. If either England or Wales caught this cleanly they would be faced with a perfect attacking opportunity. England didn’t get the blockers in this time and Watson was faced with a contest to see if he or George North could get higher. 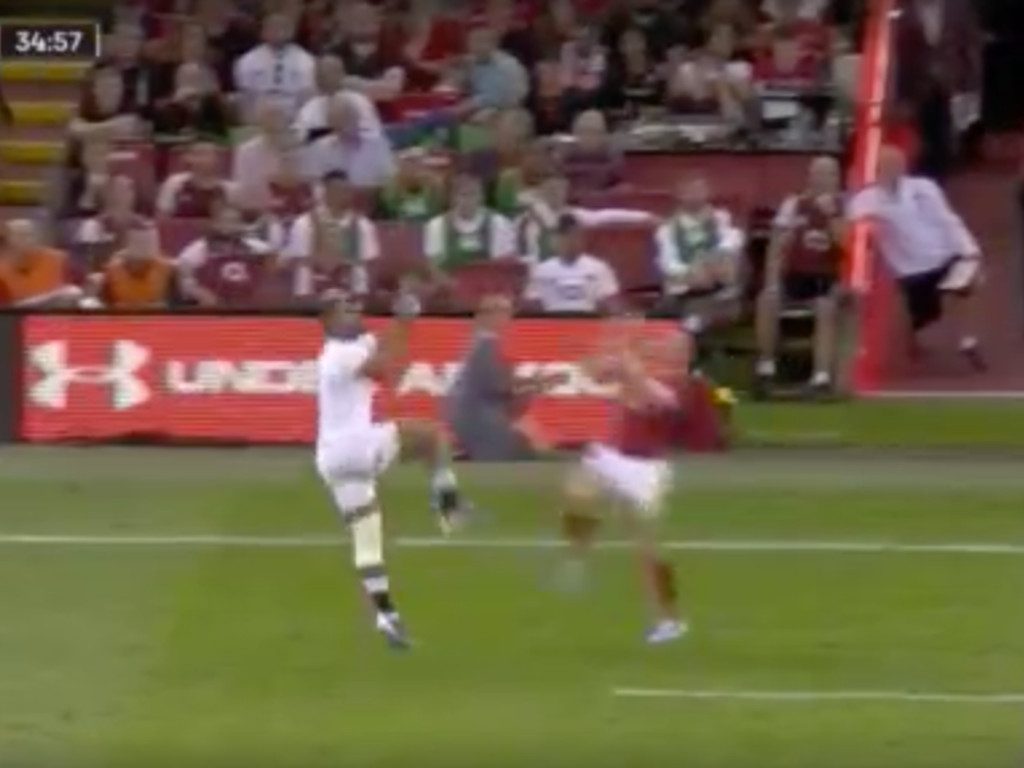 In this final example Wales once again send up a kick to the sideline with Josh Adams chasing and Cokanasiga catching. Neither make the catch and the ball ends up bouncing around before eventually being captured by England. This highlights the benefits of the kick to compete. Gaining 30 metres through phases alone would take a considerable amount of consecutively executed skills. Winning it through a 30 metre kick to compete takes a good kick and a good chase. It’s no wonder teams are increasingly turning to the boot to break down defences.

I have read a lot recently about how Daly is unable to dismantle the bombs he faces at full-back. I’ve rewatched Saturday’s game, focusing on the kicks, and Daly does a fine job. There are huge debates to be had over who should make up the English back three but I don’t believe that Daly should be discounted because of a perceived lack of catching ability.

As for Wales, with Gareth Anscombe injured, this is going to be a huge part of their game plan. Biggar is one of the best players, not just fly-halves, under the high ball. He may lack the sheer all out attack but he’s still an exceptional player, one of the finest in his position, and he is more than capable of leading the Welsh backline. What Welsh fans need to understand though is that this is the game plan now. If Wales win the World Cup they do it with a reduced game plan and a near perfect defence. Whoever they face will have to get used to taking upwards of 25 kicks in a game under sustained pressure.