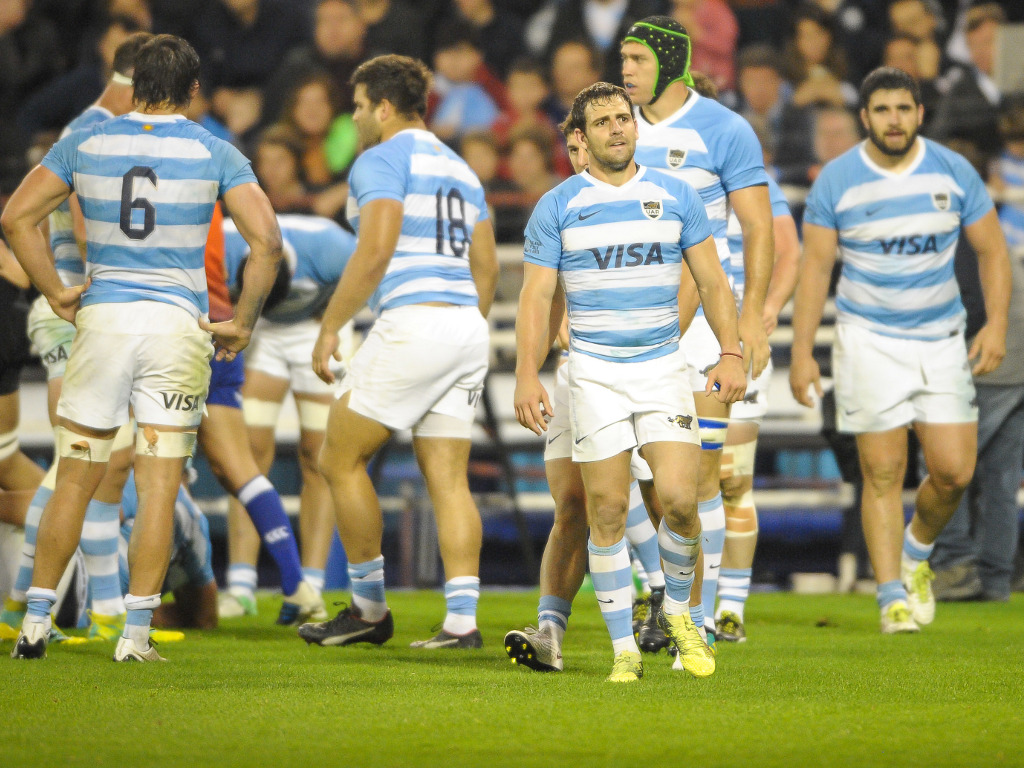 Our analyst Sam Larner returns to reflect on Argentina’s game-plan and how it has affected their results at Test level over the past 12 months.

Argentina have played 15 games since the start of 2018. They have scored 20 or more points just five times. None of those five games have happened against Northern Hemisphere opposition. As Super Rugby drew to a close we were all looking at the prospect of Argentina once again peaking for a World Cup and a run, possibly, to the last four. What has happened since is unlikely to warm South American cockles. Close losses against New Zealand and Australia looked good but they were then destroyed by South Africa. Are Argentina showing anything that would suggest they will be better in Japan? 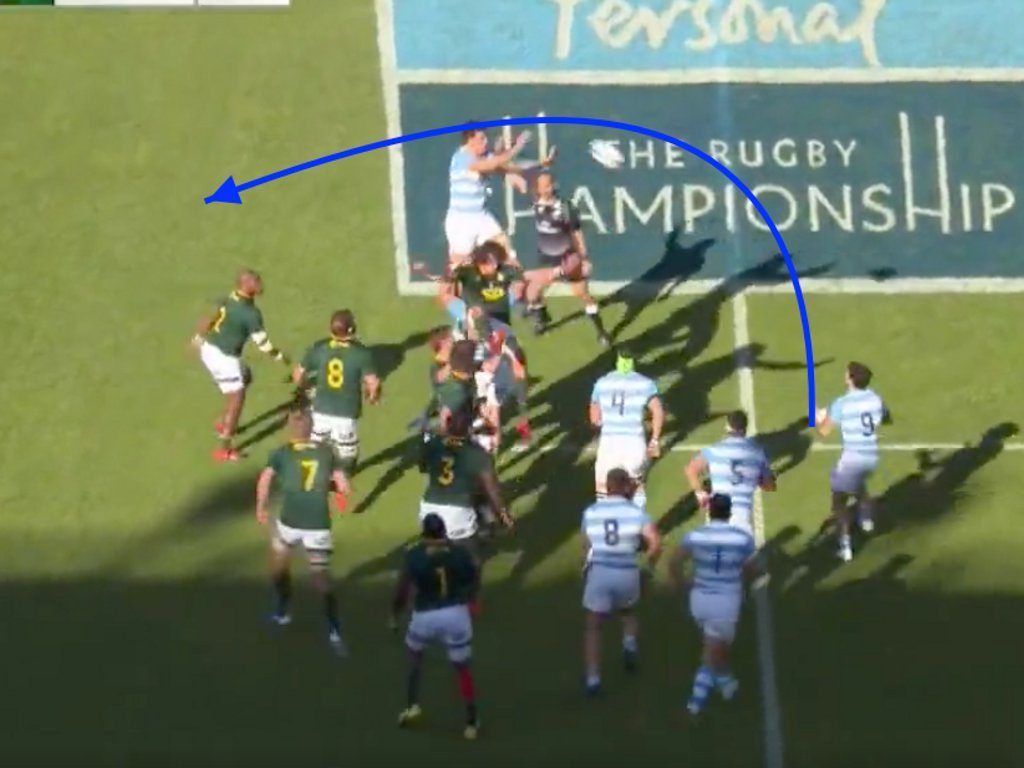 These four pictures basically sum up Argentina. This is early in their loss against South Africa and they have an attacking lineout around midfield. The ball thrown to the back allows them to attack either wide or around the back of the lineout and then straighten up. It’s about as threatening an attacking position as you can get from a lineout. It is of course a risk throwing to the back which is why all teams don’t just do it. 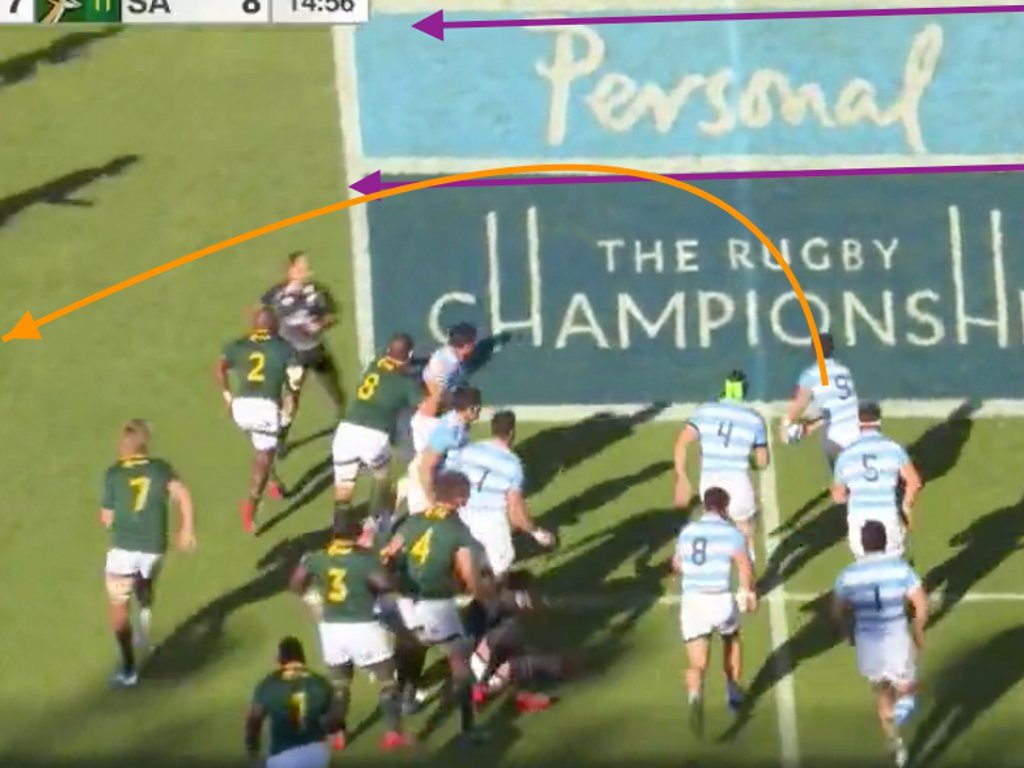 Attacking off the back puts pressure on the defence because it removes the entire set of forwards. That adds more pressure on the South African backs, who have to be wary of scrum-half Tomas Cubelli as he sprints off the back of the lineout. He acts as a make shift fly-half, fixing the defence and then relying on his outside attackers to find a hole for him to put them through. He also has fly-half Nicolas Sanchez escaping out the back if his three hard runners don’t find space. It’s perfect attack, even if they don’t break through they should be able to recycle quickly and go again on the second phase. 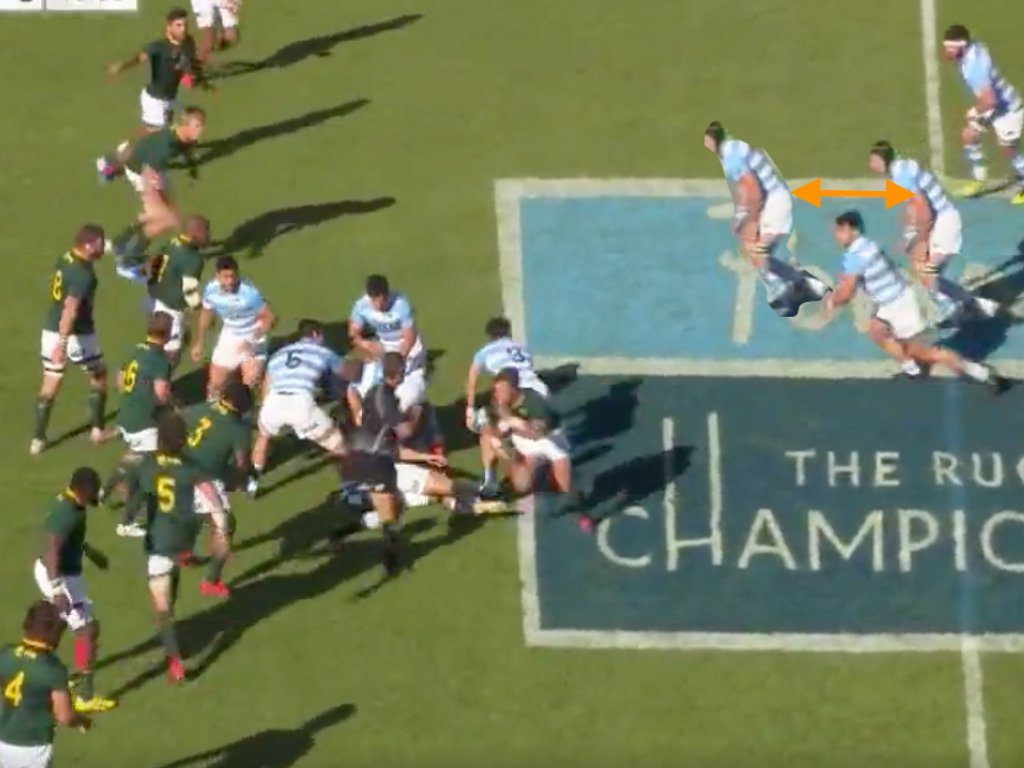 This is where it all starts to fall down for Argentina however. Lock Matias Alemanno is the man in the middle of this trio of forwards but he should be stood in front of the other two. This would give Cubelli something to aim at and it then gives Argentina three options; pop to the outside, pass back inside, or just carry. This is incredibly hard to defend; you can’t leave your man otherwise the attackers will just run through the hole or at least break over the gain line. However, it is much easier to defend when there isn’t a triangle of attackers, the ball can only go to one person and the defence will just hone in on him. Of course, in the worst case scenario, the scrum-half expects the middle man to be out in front and misses him with the pass, as happens here. 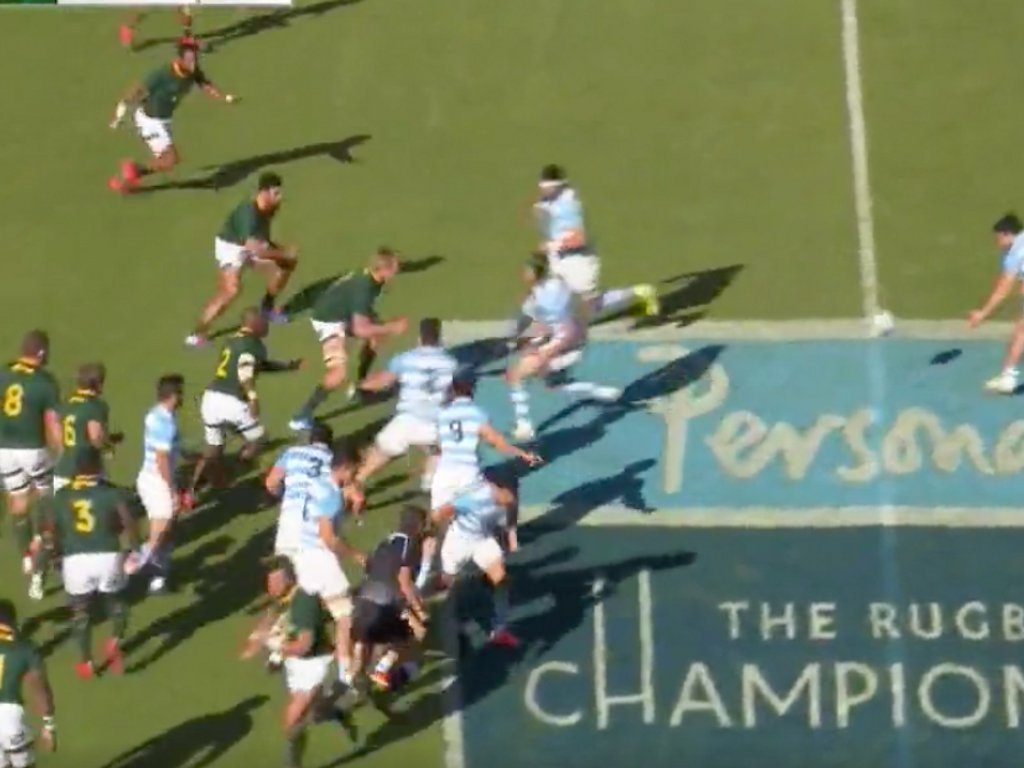 The ball misses it’s target and Argentina end up kicking it away. It’s just two phases but Argentina go from a nice attacking structure with lots of options to a broken structure and kicking the ball back to South Africa. There is a lack of patience which will hurt Argentina when they play the elite teams and their natural talent isn’t enough. 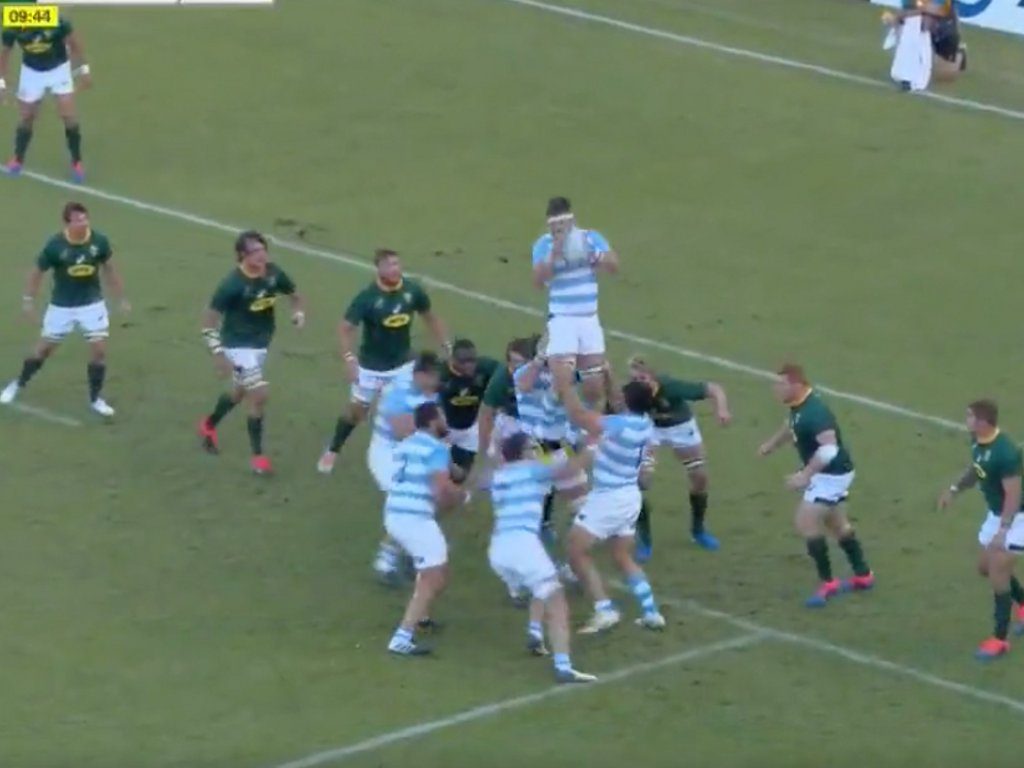 This is the section of play which broke Argentina. They were within shooting distance of South Africa and they were camped on the Springboks’ line. Faf de Klerk had just been sin binned and the Argentine lineout was working well. The lineout is successful and Argentina are set-up to roll towards the line. 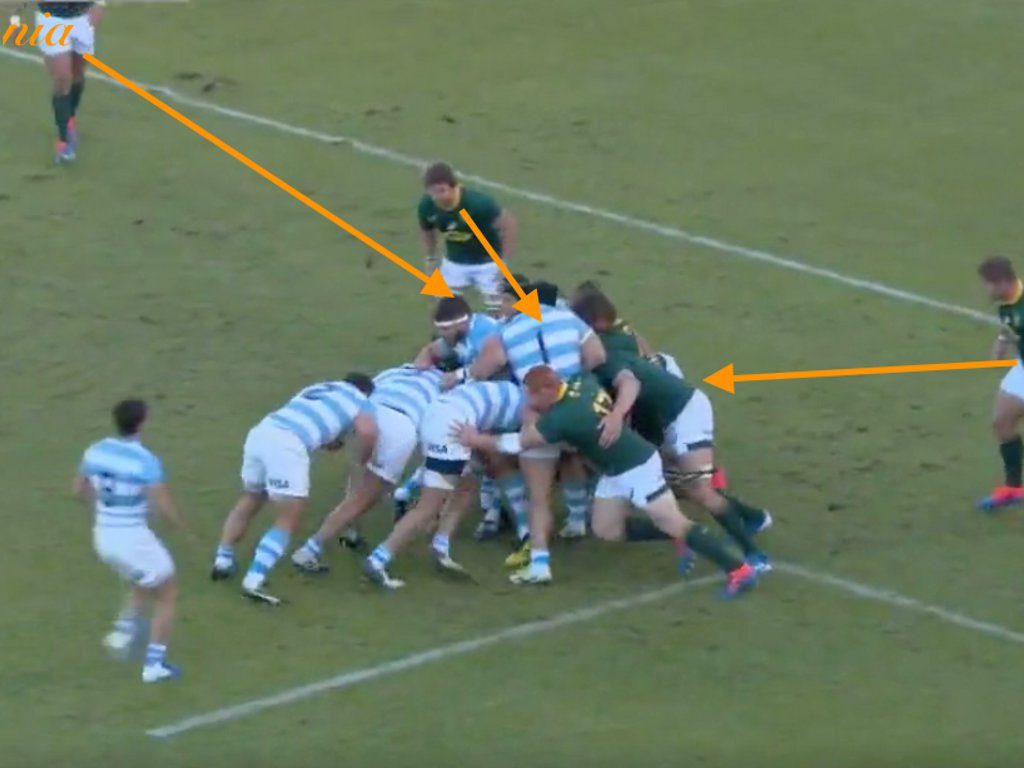 Agustin Creevy gets the ball at the back and Argentina are now in a perfect position to just keep hold of the ball and suck more defenders into the maul. Instead they peel out of the maul and try and attack the line. 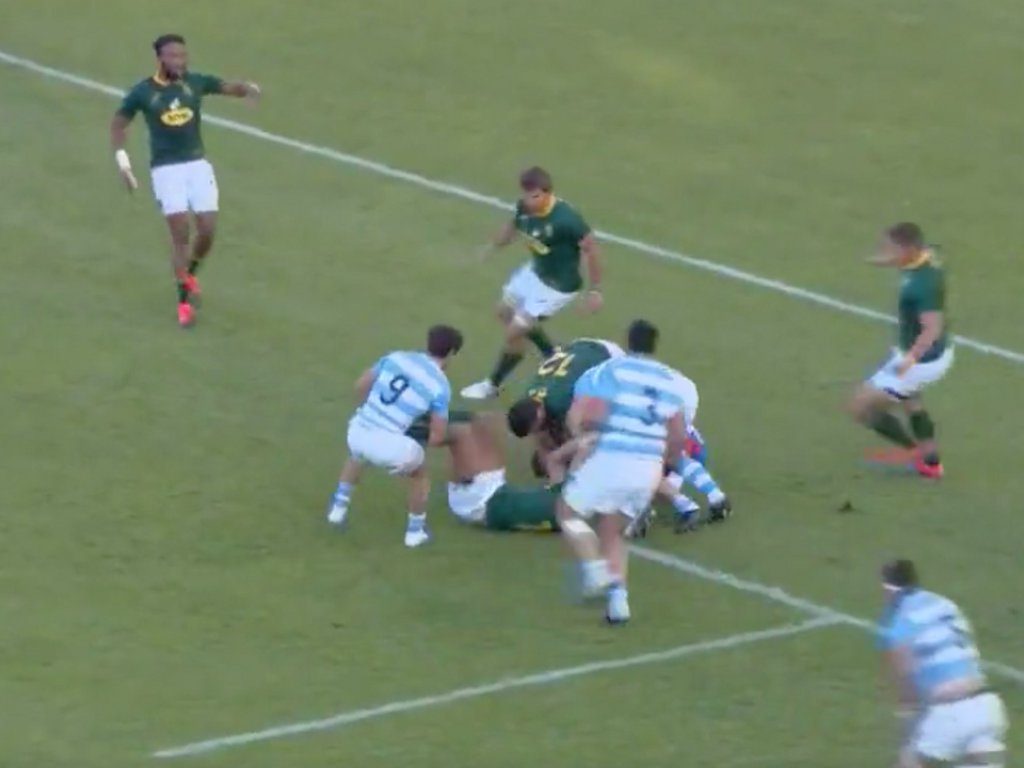 Facundo Isa is tasked with the carry but he is held up before the line and then turned over. That’s just one phase Argentina had before they were turned over. They got into a great try scoring opportunity, they kept the pressure on with their driving mauls which led to two penalties and one yellow card and when they won the advantage they attacked out wide. Once they got the yellow card they moved away from that structure and that game-plan and lasted just one phase. South Africa would score a try less than five minutes later and Argentina never scored any more points. 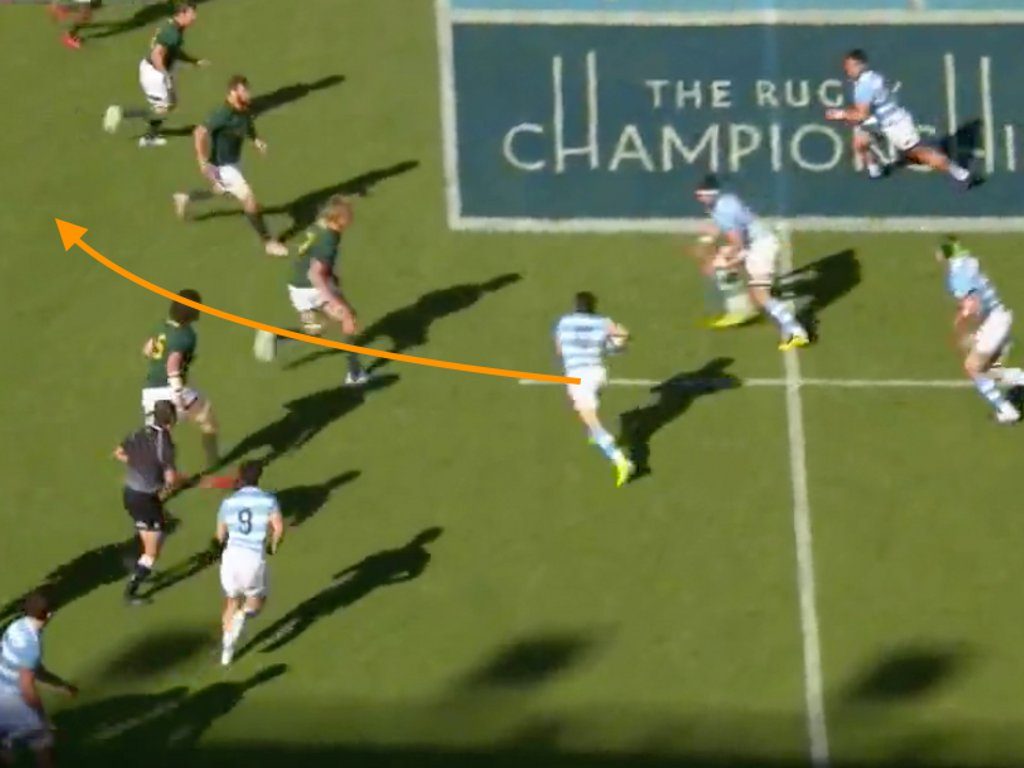 What is particularly frustrating is just how good Argentina are when they decide to stick to their structure. In this example, Sanchez takes the ball to the line with three hard running options on the outside. This is perfect, it’s so hard to defend four options in such a small area. If just one defender makes the wrong call then Argentina are gone. That happens, Sanchez sees the gap, hits it, and he’s gone. He splits South Africa in two and they get into the South African 22. 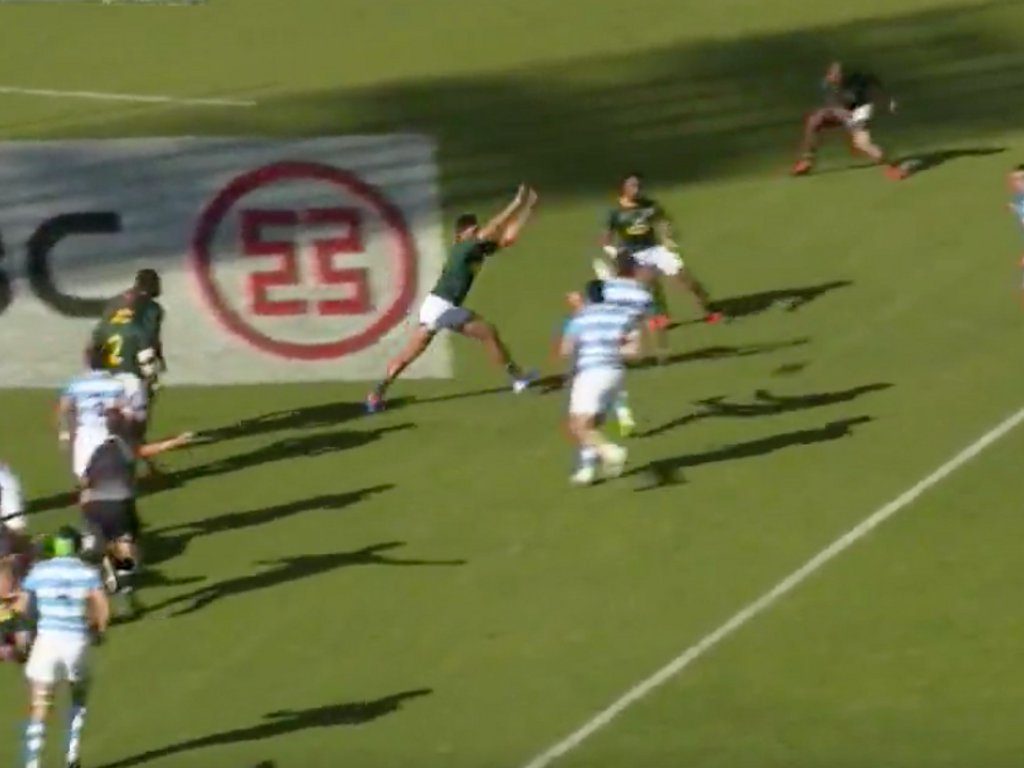 Argentina go through one phase and then Sanchez steps back in, places a beautiful chip over into the corner and Santiago Cordero scores a try. This is Argentinian rugby at its best, exciting and risky. However, that style of rugby is prone to fade if the weather turns, if the defense is particularly good, or if your playmakers are having a rough day. If those scenarios strike then Argentina need something they can fall back on which isn’t exciting but is effective, think about England towards the end of their Test against Wales on Sunday when they were squeezing the life out of the game.

Unfortunately, when Argentina step back from their 10/10 exciting game they step into a game-plan which involves them playing completely headless rugby.

Argentina play France in the Rugby World Cup on September 21. That will be a battle of two teams who, on their day, play the most exciting and expansive rugby in the World but can also, on their day, just turn into two teams who can barely comprehend what rugby is. But, would Argentine and French fans give up those breathtaking highs for something more consistent with better overall results? I’m not sure I would.