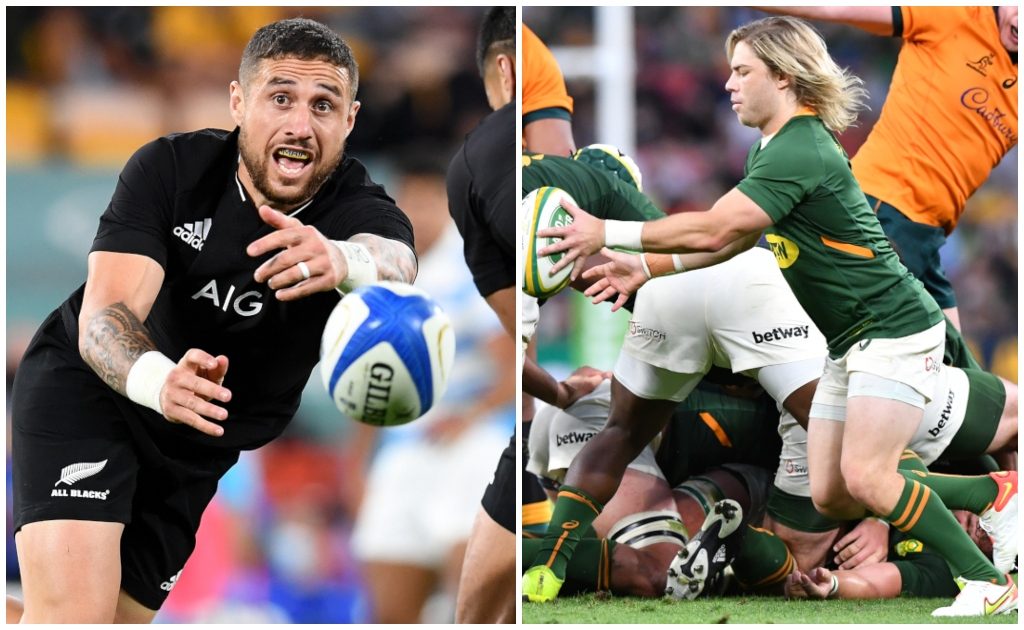 In the centenary of their first ever Test match, it feels rather poignant that the 100th clash between New Zealand and South Africa should take place this year.

On August 13, 1921 the two great nations first faced off as the All Blacks took a 13-5 victory in Dunedin. Two weeks later and the Springboks responded, edging to a 9-5 triumph, before they drew the final match of the tour.

A fierce rivalry has since ensued and, while New Zealand holds the better head-to-head record – as they do over every international side – the Boks have by far been their closest challengers. They are the two most successful rugby playing countries in history – holding three world titles each – and it will be a huge occasion on Saturday.

It is perhaps not in the way the nations – or indeed the neutrals – would have liked it, with the pandemic denying us the chance to witness this momentous clash in either New Zealand or South Africa, but nonetheless a special moment awaits this weekend.

Hopefully the game matches the event but, either way, it feels apt that the teams still play in the image they were born with. For the Kiwis, the expansive, up tempo approach they produced 100 years ago has been passed down the generations and it is something which most countries have tried to emulate at some point.

A few years ago, South Africa attempted to take that path under Allister Coetzee – with disastrous consequences. But since then, they have gone back to type, firstly under Rassie Erasmus and now with Jacques Nienaber in charge of the squad. Set-piece, physicality and an accurate kicking game are the hallmarks of this current Springbok side, facets which enabled them to win the Rugby World Cup in 2019 and a British and Irish Lions series in August.

After successive defeats to a previously struggling Australian outfit, it doesn’t look quite so rosy for Nienaber and his players going into this clash, but they have proven themselves to be a team for the big occasion.

With the All Blacks on the cusp of claiming yet another Rugby Championship title, the Boks would love nothing more than to ruin their party and also give themselves an outside shot of snatching the silverware and defending their crown.

However, whatever the end result, we simply want a game that does the occasion justice and see these two titans of the sport play to their potential.

You have to go back to the 2019 Rugby World Cup when the two teams clashed in the group stage. It was a thrilling contest between the sides in Yokohama but it was New Zealand that emerged victorious and handed the Springboks their only defeat of the campaign. South Africa would famously go on to lift the Webb Ellis Cup but they succumbed in the round robin phase thanks to a couple of superbly worked tries by the All Blacks. George Bridge and Scott Barrett crossed the whitewash in quick succession to put them out of sight, despite Pieter-Steph du Toit giving the South Africans hope in the second half. However, it would be Erasmus’ men that would have the last laugh as they won the global tournament a month-and-a-half later with a dominant victory over England.

All Blacks head coach Ian Foster is planning for a much improved South Africa performance after the Springboks struggled in their clashes against Australia.

“I can only plan and expect them to be at their best,” Foster said. “We’ve seen signs of that through the Lions series. I know people have used the word dire for that series, but it was a pinnacle event and they won it. The style of the win is probably irrelevant.

Foster also says that it is a particularly special occasion with the old rivals set to clash for the 100th time in Test matches.

“This has got a bit of a legacy moment about it – 100 Tests and 100 years,” he added. “That’s certainly made it a bit special, and also the fact we haven’t played South Africa for a couple of years and have got a bunch of players really keen to measure themselves.

“It feels to us that the whole country is really excited about playing South Africa again, and that’s a mark of respect for them.

“We’re no different, we’ve had our eye on this and we’re well positioned. We’re now going to measure ourselves against a team that’s going to play a different game and we’re excited by that.”

Springboks boss Nienaber admits that they have to be clinical otherwise his side will succumb to yet another defeat.

“We are fully aware of the challenge that awaits us, and we know what we have to do to stay on the right side of the scoreboard this weekend – strong defence, accurate execution and capitalising on our point-scoring chances will be key,” he said.

“We also have to ensure we make minimal mistakes because the All Blacks have proved time and again how they punish teams from small errors, so we need to deliver an effective performance all around.

“It’s always a massive task to face the All Blacks. They have skillful players who thrive on turnover ball and who know how to capitalise on point-scoring opportunities.

“We know that we need to a deliver a quality 80-minute performance against them to turn the corner after two disappointing defeats.”

New Zealand have all the quality in the world behind the scrum, while the back five of the forward pack offers significant carrying threat, with Akira Ioane, Ardie Savea and Brodie Retallick gain line breakers. However, they need set-piece stability to give them that control and not provide the Springboks with a sniff of an opportunity. It means the onus falls on the two props, Nepo Laulala, and Joe Moody, to anchor the scrum, as well as hooker Codie Taylor, who must be accurate in the lineout.

It is not the fiercest front-row the All Blacks have put out over recent years, despite the presence of Taylor and Moody. That Crusaders duo have struggled for form in 2021 and are under pressure to retain their starting spots from Samisoni Taukei’aho, who has enjoyed a breakout campaign, and the much improved loosehead Karl Tu’inukuafe. Even Laulala hasn’t quite proven to be the same presence at Test level as he has been in Super Rugby Aotearoa.

Although the Springbok scrum hasn’t completely fired this season, it is still a potential weapon that New Zealand have to be wary of, while Foster will also have to think about the lineout. Without Sam Whitelock, they don’t have one of their best jumpers, leaving Scott Barrett with a huge job at the set-piece. Despite being a terrific talent, Barrett still hasn’t quite nailed his best position and he could be targeted by the two mammoth South African locks.

Interestingly, Nienaber has moved away from the Franco Mostert back-row experiment for this clash, perhaps because it is simply not possible to directly replace someone of the quality of Du Toit. Instead, the Springboks have effectively gone for dual opensides in the form of captain Siya Kolisi and former Sevens star Kwagga Smith. It is a big game for Smith, who failed to make much of an impression against the British and Irish Lions but will be helped by playing in his natural position.

He will also be aided by seeing the imposing frame of number eight Duane Vermeulen alongside him. Vermeulen is still searching for his best performances after missing the Lions series, but he needs to have a big game if the defending world champions are to stand a chance.

That statement similarly applies to Handre Pollard, who had a veritable shocker against Australia last weekend. The fly-half missed kicks at goal, struggled to control the game and failed to create any attacking opportunities for his team-mates. It was in stark contrast to how Pollard performed against the Lions, with his composure and accuracy playing a vital role in that victory, and South Africans will expect far more from their star pivot.

For big games like this, TJ Perenara has rarely – if ever – been the preferred option to start but, with Aaron Smith unavailable, the Hurricanes scrum-half takes the reins. He has only ever started twice against South Africa and three times – in 21 matches – versus Australia, which means this is a big occasion for the 29-year-old. Perenara has been hugely impressive over the past two weeks and another good performance on Saturday will put it in the mind of the coaches that he could be the first choice half-back come the 2023 World Cup.

He faces the impish Faf de Klerk in Townsville, a foe that Smith has sometimes struggled against in the past, but the Sale Shark has plenty to prove this weekend. De Klerk has not found consistent top form since the World Cup success in 2019. Some good displays have been interspersed by really mediocre efforts at club level and that has rather transferred onto the international scene. He had some excellent moments against the Lions, especially in the second Test, before getting injured and missing the decider. The playmaker returned against Australia but really struggled to stamp his mark on the game in both matches and that is a concern leading into this clash. Both players have question marks hanging over them and whoever dispels those queries will go a long way to helping their team to a win on Saturday.

This isn’t the same Springboks side that won the World Cup and their limitations were exposed by Australia, particularly in the second Test. If the Wallabies have found a way of breaking South Africa’s usually stern defence then you would expect the All Blacks to cause even more problems. Foster’s men look a better team in 2021 and should make it five from five. New Zealand by 12 points.