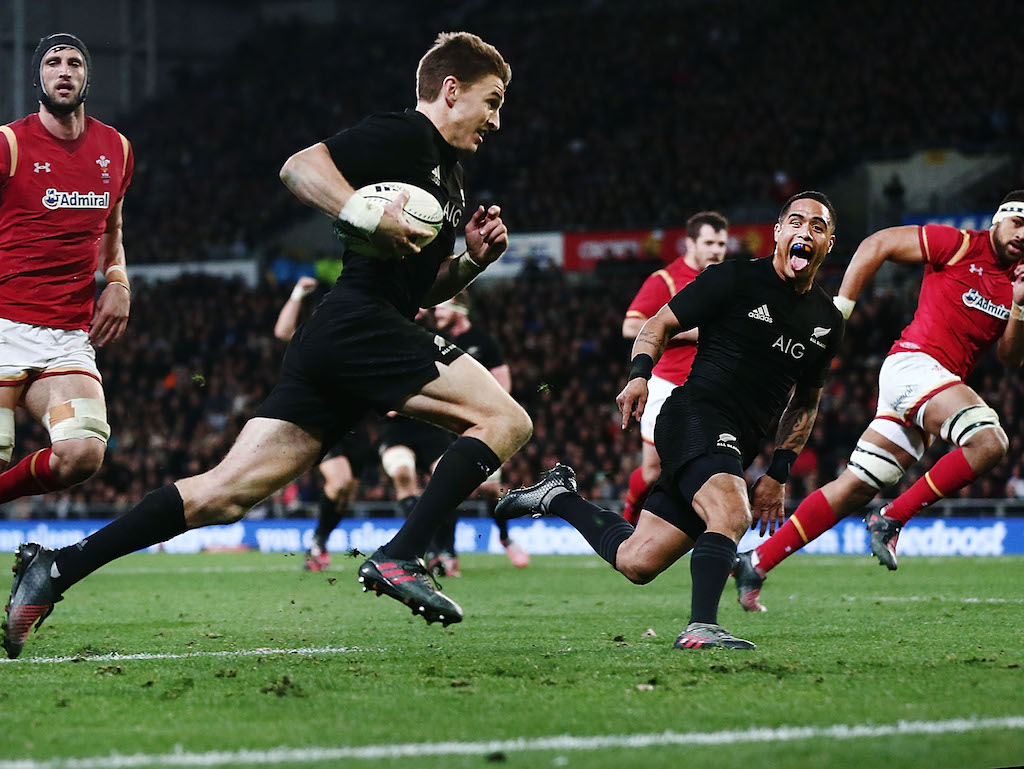 New Zealand produced a masterclass of attacking rugby on Saturday as they demolished Wales, running out 46-6 winners in Dunedin.

In a thrilling display of enterprising rugby in which they stayed true to their attacking roots but also showed tremendous discipline on defence, the world champions outscored their visitors by six tries to zero with Beauden Barrett leading the way with a superb all-round display, finishing with a 26-point haul via two tries, five conversions and two penalties.

The victory secures a 3-0 series whitewash for the All Blacks and stretches their unbeaten run against Wales to 29 matches.

Wales were impressive during the early exchanges but unlike the two previous Tests – in Auckland and Wellington – when they were still in the game at half-time, they faded badly on this occasion and had no answer for the All Blacks’ dominance on attack.

The visitors made the brighter start and took the lead via a Dan Biggar penalty in the sixth minute, after Sam Cane infringed at a ruck, before Barrett drew the home side level from the kicking tee when Wales’ back-line went offside on defence.

Dane Coles was then blown up for obstruction in the 17th minute and Biggar restored the visitors three-point lead when he landed his second penalty.

Shortly afterwards Ben Smith ran onto a pass from Barrett close to Wales’ 10-metre line and went on a mazy run before Rhys Patchell halted his progress with a desperate tackle close to the visitors’ try-line.

From the ensuing scrum, the All Blacks set up some phases with their forwards before Aaron Smith threw a long pass to his namesake, Ben Smith, who got over in the right-hand corner for the opening try.

Barrett missed with the conversion attempt but soon made it 11-6 with his second successful penalty. The All Blacks continued to dominate and spent large periods camped inside Wales’ half with the two Smiths – Aaron and Ben – and Israel Dagg prominent as they launched several attacks from inside their half.

And on each occasion they got over the gainline with ease, leaving defenders floundering as they soon found thmselves deep inside Wales’ 22. One such attack saw Brodie Retallick, Julian Savea, Dane Coles, Ryan Crotty, Barrett, and Dagg all handling the ball before the latter was stopped just short of the try-line, but George Moala did well to gather before barging over for his second Test try in as many appearances.

Barrett added the extras which meant the home side were sittting pretty at 18-6 as the teams changed sides at the interval.

Wales tried to take on the All Blacks at their attacking game but their decision to run the ball from their own try line, soon after the restart, backfired when they were called back for a forward pass from Jonathan Davies to Hallom Amos.

That error had calamitous consequences as Barrett took a flat pass from Aaron Smith from the resulting scrum on Wales’ five-metre line, and the direct route had the desired effect as he flattened Biggar on his way over the whitewash.

Shortly afterwards, the world champions were reduced to 14 men – Sam Cane receiving his marching orders for continually infringing at the ruck area, but that setback had little impact on the match an Wales failed to add to their tally.

The All Blacks rang the changes and in the 57th minute Lima Sopoaga, shortly after entering the fray, put Barrett in the clear on the edge of Wales’ 22 before he slipped past two defenders and got over for his second try.

The hosts had the game in the bag but didn’t take their foot off the pedal and five minutes later Coles got his name onto the scoresheet after running onto a flat pass from Cane.

Wales upped the ante in a bid to add some respectability to the score, but shortly before full-time they conceded a turnover inside New Zealand’s half and Dagg sealed the win when he outpaced the cover defence before clinching the result with his side’s sixth try.

Man of the Match: Several All Blacks put their hand up with Aaron Smith, Ben Smith and Israel Dagg particularly outstanding but, in the end, Beauden Barrett gets our vote for a superb allround showing.

Moment of the Match: Although New Zealand held a comfortable 18-6 lead at the interval, Barrett’s first try, shortly after the restart, hammered home his side’s dominance and there was no looking for the world champions after that.

Villain of the Match: Nothing nasty to report.