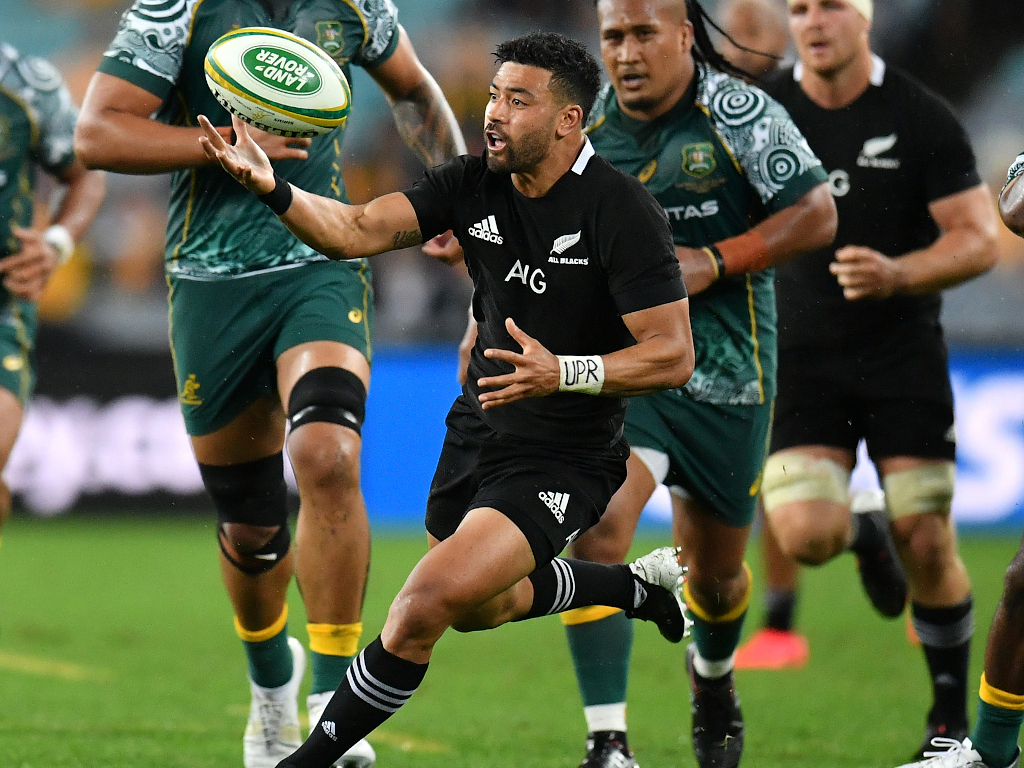 New Zealand wrapped up the Bledisloe Cup for an 18th successive year as they proved too strong for Australia, winning 43-5 in Sydney on Saturday.

Tries from Karl Tu’inukuafe, Richie Mo’unga (2), Dane Coles, Rieko Ioane and Jordie Barrett saw the All Blacks cruise to a record victory over their rivals.

Australia’s only try came from Noah Lolesio as they were embarrassed by their visitors and must regroup ahead of facing them again next week in Brisbane.

It was a dream opening half for the All Blacks as they ran in four tries and it could have been more, which was hugely concerning for the Wallabies supporters.

Australia’s cause was not helped early on when on three minutes Filipo Daugunu was sin-binned for taking out Caleb Clarke while the All Black was in the air.

With a man advantage the All Blacks duly sensed an opportunity to strike and on six minutes they were over as a huge overlap was created from second phase play, with Tu’inukuafe straightening before scrambling over for a 7-0 lead. The loosehead prop would breathe a sigh of relief as numbers were waiting outside.

The game was then played at 14 apiece when Jordie Barrett followed Daugunu to the sideline after he led with the elbow in contact against Dane Haylett-Petty. But that didn’t impact on New Zealand’s form as they almost scored again on 11 minutes, this time Coles denied for not grounding sufficiently over the chalk.

Another close call came two minutes later when Coles and Aaron Smith combined to send Clarke in, but he was denied by a sliding Marika Koroibete on the right.

Finally, New Zealand would be rewarded for their efforts though as there was no stopping Mo’unga on 21 minutes, his pace proving too much for hooker Brandon Paenga-Amosa, before he beat Lolesio to the right corner. Mo’unga’s missed conversion meant it was a 12-0 cushion, but one felt there was much more to come.

So it proved as Mo’unga added another crossing six minutes later, this time from long-range when he scorched over after collecting Beauden Barrett’s smart chip.

New Zealand were now turning the screw and it was Coles crossing next, the hooker scoring at the back of a driving maul from five metres out for 26-0. And it could’ve got worse for the Wallabies late in the half when a spillage from Daugunu saw Mo’unga almost cross again but for a slip to save the wing’s blushes.

A great day at the office in Sydney.#AUSvNZL #BledisloeCup pic.twitter.com/5hh7SLnG7p

Australia were needing a miracle on the resumption and got the perfect start to the second half when centre Jordan Petaia’s powerful carry got them into the 22 and on the front foot. That allowed Lolesio to find a gap in the scrambling defence and he pierced it to get Australia on the board with an unconverted try.

The Wallabies knew they would also need the next score in the game to make a contest out of the clash but it wasn’t forthcoming and it was New Zealand who put points on the board, Mo’unga sending over a penalty on the hour mark to make it 29-5. Both head coaches were now starting to utilise their replacements.

The changes, coupled with New Zealand taking their foot off the gas, saw a dip in entertainment value thereafter, with plenty of stoppages disrupting the flow. But on 71 minutes the visitors hit their straps again when Hoskins Sotutu went to the short side of the scrum where he found Ioane for the simplest of tries.

There was more to come too when a minute later Jordie Barrett sliced through on halfway before sprinting over to make it 43-5, adding the gloss on a record win as New Zealand wrapped up the Bledisloe Cup yet again, with a late Shannon Frizell yellow card doing little to dampen the All Blacks spirits after this result.