Home International All Blacks and Wallabies share the spoils in Wellington 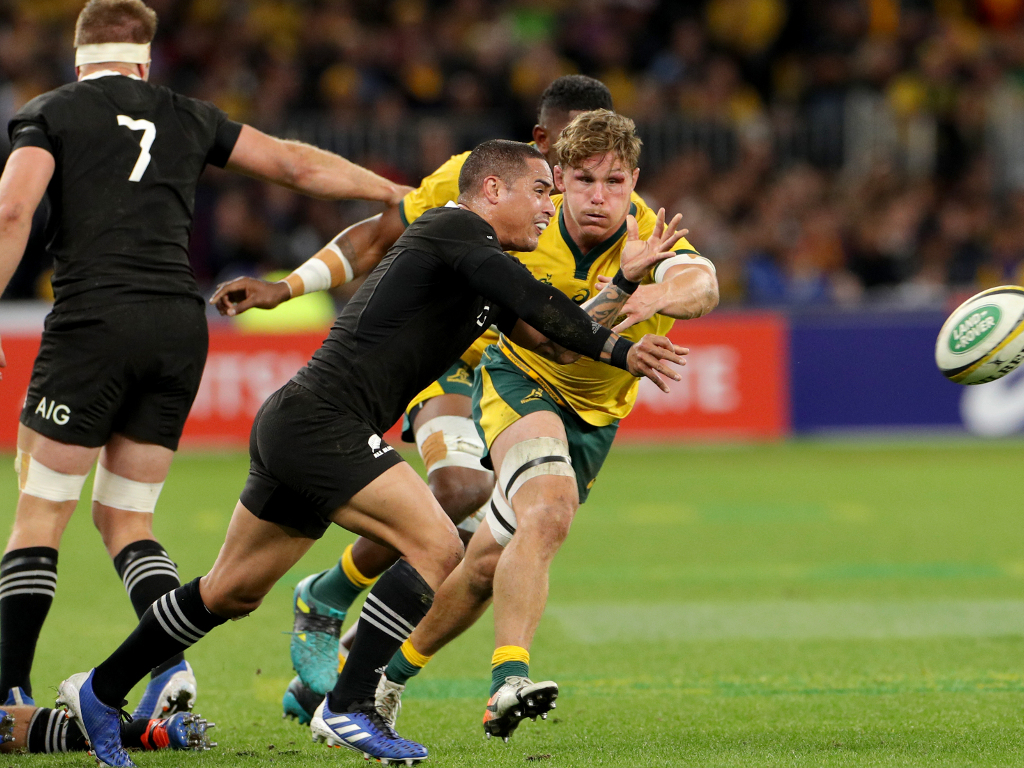 New Zealand and Australia could not be separated in Wellington on Sunday, with their Bledisloe Cup Test finishing in a hard-fought 16-16 draw.

In a drama-filled and exciting contest, both sides scored two tries apiece with Jordie Barrett and Aaron Smith dotting down for the All Blacks while Marika Koroibete and Filipo Daugunu crossed for the Wallabies.

Barrett also added a couple of penalties for the home side and Australia’s other points came courtesy of two three-pointers off the kicking tee from James O’Connor.

The hosts dominated early on but Australia improved as the match progressed and finished stronger. The Wallabies had a chance to win the game in injury time when Reece Hodge lined up a goal-kick from 53 metres out but his effort struck an upright and the teams had to settle for the draw.

The opening exchanges were frantic with the Wallabies doing most of the attacking but the All Blacks soaked up the early pressure and eventually took the lead with a well-taken try from Barrett in the ninth minute. Rieko Ioane laid the groundwork with a strong run before the ball was recycled quickly and brilliant offloading from Damian McKenzie, Jack Goodhue and Shannon Frizell created space for Barrett out wide and he went over in the right-hand corner.

In the 27th minute, Barrett increased the All Blacks’ lead when he slotted a penalty from close range before O’Connor opened the Wallabies’ account with his first three-pointer midway through the half.

Just before half-time, Sam Cane pounced on a loose ball just outside his 22 and the All Blacks launched a counter-attack with McKenzie and Richie Mo’unga prominent. The fly-half did well to draw in the final defender before offloading to Ioane, who had an easy run-in, but he lost the ball while crossing the whitewash which meant the teams changed sides at the interval with New Zealand leading 8-3.

Australia had an early opportunity to score points in the second half when shortly after the restart O’Connor lined up a shot at goal, after McKenzie was blown up for holding onto the ball on the ground, but his effort was wide of the mark.

That proved costly as shortly afterwards the home side launched an attack from a lineout close to the halfway line and Codie Taylor caught the Wallabies napping on defence when he threw an inside pass to George Bridge at the back of the set-piece. Bridge hit the line at pace before getting a pass out to Smith, who got the better of Nic White before crashing over in the left-hand corner.

The Wallabies needed a response and that came in the 53rd minute when they launched an attack just outside New Zealand’s 22. O’Connor ran a good line before finding Koroibete with a long pass and he did well to score out wide despite a desperate cover tackle from McKenzie.

Ten minutes later, the Wallabies drew level when McKenzie did well to rip the ball from the grasp of Matt Philip at a ruck close to his try-line but none of his team-mates were there to gather the loose ball. White was quickest to react and offloaded to Daugunu, who cantered in for an easy try.

O’Connor failed to convert which meant the sides were deadlocked at 13-13 and we were set for an exciting finish. In the 71st minute, New Zealand were awarded a scrum penalty but with rain pouring down and a strong wind blowing, Barrett pushed his kick wide of the uprights.

Soon after, Karl Tu’inukuafe infringed at a breakdown close to his 22 and with the wind at his back O’Connor made no mistake off the tee to give his side the lead for the first time in the game.

Two minutes before full-time, Rob Simmons entered a ruck from the side and Barrett made up for his earlier miss by slotting the resulting penalty. That meant the sides were level at 16-16 but that was not the end of the match.

There was plenty of drama after Hodge’s long-range effort hit the post with both sides scrambling to win the game as the clock went into over-time. The All Blacks came closest but conceded possession near to the Wallabies’ try-line deep into injury time with O’Connor opting to kick the ball into touch and the teams had to settle for a share of the spoils.