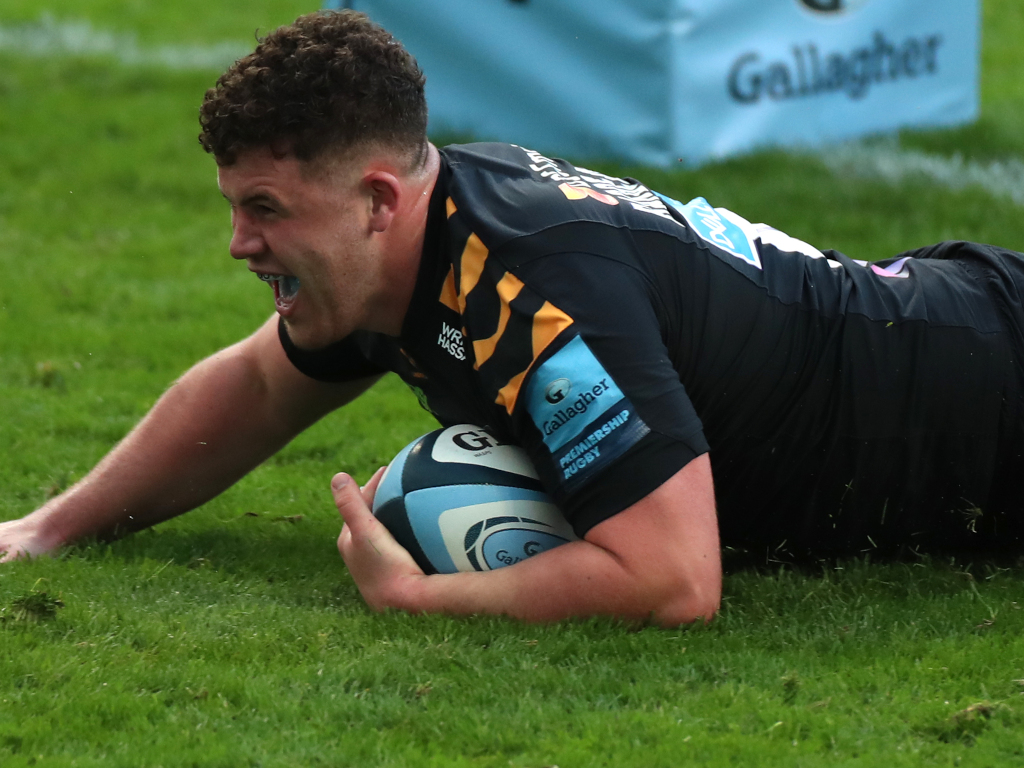 Wasps reinforced their claim to a Premiership semi-final through a 54-7 rout over Leicester at the Ricoh Arena that saw Alfie Barbeary celebrate his full debut by scoring a hat-trick of tries.

Barbeary was selected ahead of in-form England prospect Jack Willis at blindside flanker and on this man-of-the-match evidence Eddie Jones will soon have another back-row option on his radar.

The 19-year-old converted hooker displayed power, pace and skill for his three tries, the second of which delivered the bonus point that keeps Wasps ahead of Bath in fourth place.

It was another highly impressive performance from eight-try Wasps, who have emerged from lockdown as a genuine force in the Premiership.

Tarnishing the win, however, is that it came against an under-strength Leicester whose entire starting XV contained 95 Premiership starts between them – the same total as home scrum-half Dan Robson.

And the Tigers paid the price by conceding a record number of points in the Premiership in the latest mismatch to scar the top flight as clubs are forced to rotate in response to a brutal schedule.

A first away league win never appeared on the cards and it was a disappointing way for England prop Ellis Genge to mark his first appearance as captain.

Despite their inexperience and lowly league position, Leicester drew first blood when waves of attacks launched from the opening whistle ended with lock Cameron Henderson forcing his way through three black shirts to touch down.

But the promising start was not to last and the game pivoted in the second quarter as Wasps began to make an impact on the floor while also showing greater accuracy in their play.

A 'Man of the Match' performance from the 19-year-old 👏 pic.twitter.com/tDIjYgSjhM

The reward came in the 25th minute when a line-out drive ended when Malakai Fekitoa ran flat from outside centre to take Robson’s pass and storm over.

Brad Shields was at the heart as Wasps’ pack steamrollered to within a few metres of the line as they renewed their attack and although Leicester scrambled to safety, their forwards were outmuscled again shorty after and prop Tom West burrowed across the whitewash.

A forward pass chalked off a third home try as the blindside was exploited brilliantly early in the second half but the next touch down was imminent and Barbeary obliged by taking Robson’s pass, dummying and crossing.

Daylight opened up when Barbeary claimed his second, this time demonstrating his strength to score from close range after Leicester splintered before a line-out drive.

It became the backs’ turn to dazzle when Fekitoa showed an injection of pace to burst free and with full-back Matteo Minozzi continuing the move, Jacob Umaga arrived in support to finish a try that sealed the bonus point.

Not to be outdone, the unstoppable Barbeary showed his athleticism and skill to grab his third before replacement Sam Spink continued the rout.

With the floodgates wide open, Zach Kibirige finished a sweeping move to put Leicester out of their misery.

Meanwhile, Exeter booked their place in the Premiership play-offs with three games to spare after beating Gloucester 35-22 at Sandy Park.

The runaway league leaders posted a seventh successive league win and look unstoppable as they target a fifth Twickenham final appearance on the bounce.

Captain Joe Simmonds kicked five conversions, and the only downbeat note for Exeter was seeing their Scotland international full-back Stuart Hogg limp off in the 55th minute.

Hogg pulled up after an Exeter attack, with his early departure coming 10 days before Chiefs’ Heineken Champions Cup quarter-final against Northampton.

Elsewhere, Sale Sharks moved back up to second place in the Premiership standings after they overcame relegated Saracens 24-17 at the AJ Bell Stadium.

Tries from Matt Postlethwaite, Valery Morozov and Simon Hammersley saw them to the four points that lifts them above Bristol Bears, who won on Tuesday.

For Saracens, Rotimi Segun scored a brace of tries as they came into the game without fly-half Owen Farrell following his recent five-match suspension.

Marcus Smith scored 16 points against London Irish as Harlequins won the battle of the Stoop 38-15 to virtually seal their Champions Cup spot for next season.

Their bonus-point victory saw them rise to sixth in the table and, with a 13-point gap over ninth-placed Irish, the required top-eight finish is almost guaranteed with only three games remaining.

Since the resumption, Irish have only picked up a point while losing all six games. Their tries came from Dan Norton and Ben Donnell with Jacob Atkins kicking a penalty and conversion.

Harlequins responded with two tries from Smith with Scott Baldwin, Cadan Murley and Scott Steele scoring one apiece. There was also a penalty-try award, with Smith adding three conversions.

Finally, Bath rested many of their big names yet still ran in six tries against Worcester to keep up the pressure on the Premiership’s top four.

They now sit just a point behind Wasps, but with an extra win under their belts ahead of Sunday’s visit to second-placed Sale Sharks.