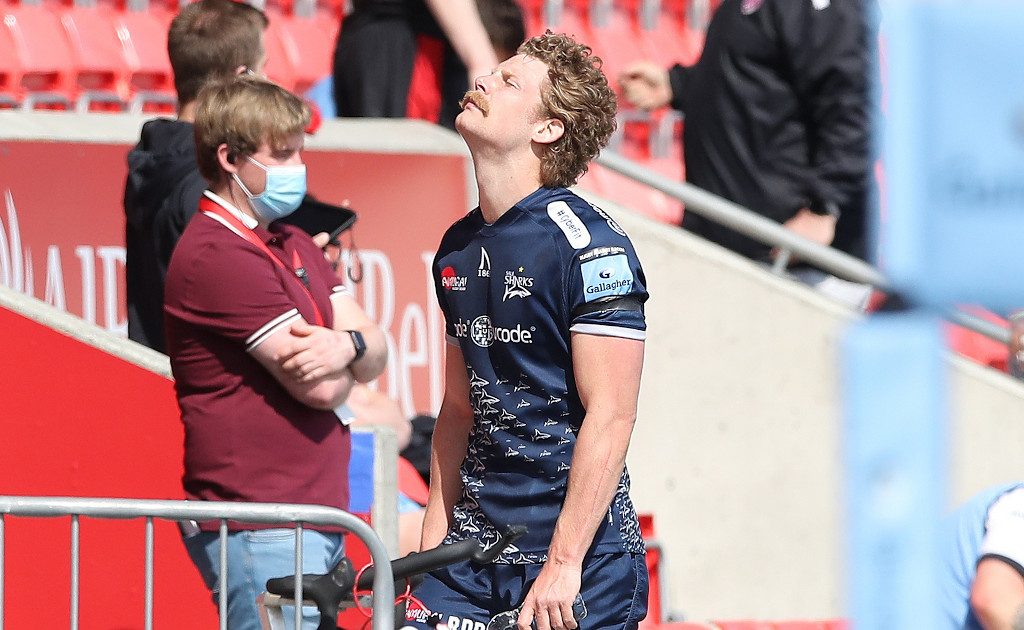 Sale Sharks director of rugby Alex Sanderson admits his side must improve their discipline if they are to be genuine title challengers this season.

The Greater Manchester outfit had Rob du Preez sent off in the first half of their game against Gloucester for a tip-tackle on Val Rapava-Ruskin but they showed tremendous spirit to secure a valuable 25-22 triumph.

Faf de Klerk, Arron Reed and Marland Yarde all touched down while AJ MacGinty came onto the field to kick eight points, including the game-winning penalty.

Sanderson was full of praise for his team’s resilience and composure but there are continued concerns around the amount of yellow and red cards they have received.

It does need to improve

He said: “It [discipline] is addressed, constantly addressed, through our behaviours, through an awareness.

“The only other thing is to start fining the lads and that’s not the way forwards. Any discipline has got to be self-discipline.

“We’re going to get caught out at some point, it does need to improve. I thought the discipline generally was good but it’s the yellow and red cards you’re talking about.

“We’re such a physical team, a big, upright team and we tend to give a lot of shots around the neck. This was slightly different in that it was a tip-tackle from Rob du Preez, who’s not a dirty player, but it is what it is.

“I’m fed up of calling refs, saying ‘that was hard luck’, as it’s out of your control. You can’t control that, so otherwise you end up being quite a bitter old man if you’re blaming the refs for penalties and your own ill-discipline.

“If you get everything right in terms of your systems, discipline doesn’t come into it. If we had got our exit right, got our ruck right, it [the red card] wouldn’t have happened.

“If you focus on yourself and focus on what you do then the rest should look after itself.”

Following the disappointment of their defeat to La Rochelle in the Champions Cup last weekend and the issues caused by Du Preez’s red card, Sale could have folded but Sanderson was pleased with the response of the players.

He added: “It came off the back of 12 weeks’ competition, with the last three weeks on the road and a massive loss against La Rochelle.

“It’s not just the red, it’s all that’s gone before so, when you put it into that context, look at how deep they dug.

“I couldn’t be prouder of that group of lads, I’m so privileged to be a part of it. The boys have got some ticker haven’t they?”

Sale’s win condemned Gloucester to their 12th Premiership defeat of the season and head coach George Skivington believed their performance was better prior to the red card.

He said: “The lads were bringing the physicality, the lads were organised and I think them losing a player actually knocked us off our stride.

“We started playing a little bit differently to what we set out to do. We probably tried to get to that third phase before we had run the first and second.

“I was disappointed with how we managed it. I thought the effort and physicality was there, I thought the two defences went toe-to-toe, but in the end they managed it better than us.”