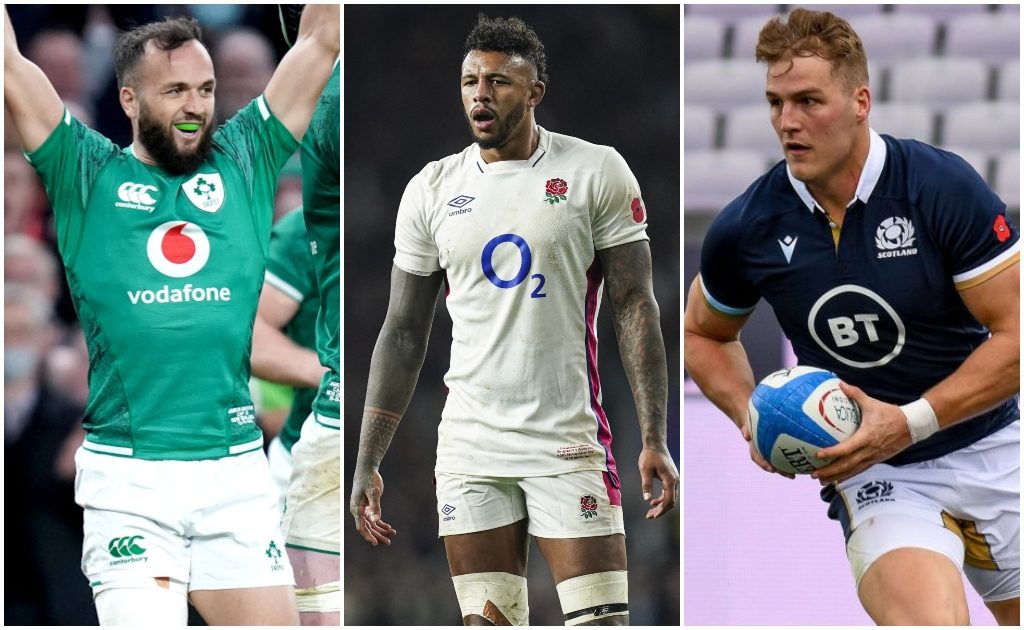 Less than four months after the end of the ill-fated British and Irish Lions tour to South Africa, there’s been a huge change in fortunes for the Home unions.

Ireland have pulled clearly away from the chasing pack, with due respect paid to England who are playing some scintillating rugby at the moment. The Scots are in a good place but Wales are somewhat in the doldrums. So what would a Lions XV look like to play if selected purely on the form of the Autumn Nations Series?

15 Freddie Steward (England): ‘Air Steward’ has become one of England’s key cogs in their new-look all court gameplan. Huge under the high ball, he would have dominated the Bok aerial attack earlier this year, adding pace and physicality into the line. Stuart Hogg (Scotland), Hugo Keenan (Ireland) and Liam Williams (Wales) would also tour.

14 Duhan van der Merwe (Scotland): For ease of selection, we’ve swapped the massive Scot to the right wing, where he’s played many times. His power and pace are a crucial weapon for Gregor Townsend’s men and he sees off the challenges of Andrew Conway (Ireland), Darcy Graham (Scotland) and Louis Rees-Zammit (Wales).

13 Manu Tuilagi (England): Ok, Ok, we’re taking a leap of faith here and imagining a fit Tuilagi as his presence fixes defenders and makes space more than any other centre in the world. Chris Harris (Scotland) is in as back-up to provide injury cover – the Scotsman has gone up another level again this autumn and we’d pick him if it were not for Tuilagi. Garry Ringrose (Ireland) also supports, offering contrast if needed.

12 Henry Slade (England): His 77 minutes at 12 versus South Africa was the performance of the autumn, where his interplay with Marcus Smith tore the Bok defence apart on three occasions. With Robbie Henshaw and Bundee Aki (both Ireland) as a supporting cast, all bases are covered.

11 James Lowe (Ireland): His all-round exploits and hunger for work has made him into a midfield dynamo for Ireland and it’s that workrate and aerial superiority that sees him selected over the other aforementioned wing options.

10 Marcus Smith (England): The Lions missed a trick when they didn’t select him in the 23 for the second and third Tests. He’s a player with more momentum than any other in world rugby right now, and he edges it off Scotland’s Finn Russell, who would offer a like for like off the bench, or Johnny Sexton (Ireland), to add grit and nous to the backline.

There could only be ONE man 🔥

9 Jamison Gibson-Park (Ireland): Gibson-Park offers a speed of service that characterises all Kiwi half-backs and has been pivotal in Ireland’s superb November showing. Ali Price (Scotland) still offers a great deal to any side he plays in, with Wales’ Tomos Williams still a great option as back-up.

8 Jack Conan (Ireland): No change here, but he sees off the worthy challenge of his own team-mate Caelan Doris in the race for the eight shirt. Aaron Wainwright of Wales was unlucky not to tour in the first place and his versatility is always handy.

7 Tom Curry (England): Again, it’s business as usual as Curry (although at eight in recent weeks) has been in remarkable form for England. Taine Basham (Wales) has demonstrated huge promise in defeat, whilst Ireland’s Josh van der Flier put down a huge marker in his personal performance versus New Zealand.

6 Courtney Lawes (England, c): Completing a no-change back-row, in his last six Tests, Lawes has reeled off six consecutive world-class performances and is arguably the form forward of the world. His grounded manner sees him lead our side, but we can’t wait to unload Scotland’s action man Jamie Ritchie off the bench.

5 Jonny Hill (England): Sometimes a player returns from their first Lions trip looking a different person to the one we saw before the tour and Hill has been absolutely huge for England in their unbeaten run. With Adam Beard (Wales) missing out on a starting place this time, our lock stocks are completed with Ireland’s superb James Ryan.

4 Maro Itoje (England): The Lions Player of the Series in South Africa, Itoje is relentless and continues his fine form. His selection is assured. Ireland’s Tadhg Beirne and Iain Henderson, both tourists in the original tour, will offer plenty of cover off the bench.

3 Tadhg Furlong (Ireland): As easy a selection as Itoje, the Wexford Walloper is another in compelling form. He would be supported by the same tightheads that we saw on the Lions tour in England’s Kyle Sinckler with Andrew Porter offering support too.

2 Ronan Kelleher (Ireland): Unlucky to miss out on original selection, the Irishman has been absolutely outstanding this autumn. With England’s two main players injured, we would take the excellent George Turner of Scotland, with Wales’ Ryan Elias just shading the last spot from Jamie Blamire of England.

1 Andrew Porter (Ireland): Porter was one of the most unlucky players to miss out on the first trip, suffering injury before the tour started. Able to play on either side, he shores up our loosehead side completing an all Irish front-row, with England’s Joe Marler and Scotland’s Pierre Schoeman signing off on our all-changed selections.