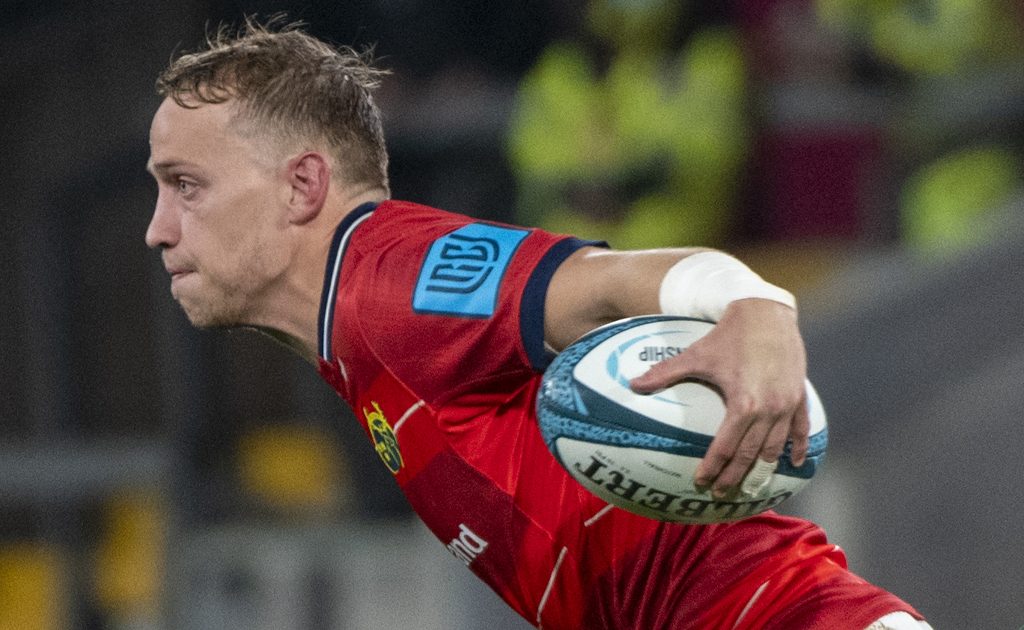 Munster recovered from an early Simon Zebo red card to seal a much-needed 18-13 win over Ulster in the United Rugby Championship on Saturday.

The wing was sent off for a high tackle in the 14th minute of the game and Ulster, with Rob Herring having earlier scored a try, sensed a first victory in Limerick since May 2014.

Two Nathan Doak penalties, in response to a couple of Jack Crowley three-pointers, had the visitors leading 13-6 until Munster rallied.

Inspired by Tadhg Beirne, the men in red closed the gap with a Mike Haley try before replacement Alex Kendellen scored the match winner with five minutes remaining.

Beirne came in late to captain Munster on his 30th birthday, standing in for Peter O’Mahony who was withdrawn following the warm-up, while Kendellen had been drafted in to take Beirne’s place on the bench.

Munster suffered an even bigger blow when Zebo’s shoulder made contact with the face of Ulster full-back Mike Lowry. TMO Brian MacNeice’s input led to referee Mike Adamson reaching for his red card.

Strong carries from John Hodnett and Thomas Ahern sparked a furious Munster spell near the Ulster line. Crowley popped over a penalty and added a second one after Sam Carter was slow to roll away.

However, Doak, who replaced the injured Cooney, made it 10-6 just before half-time and Ulster exerted maul pressure again on the resumption.

The numbers were evened up when Ulster replacement Kieran Treadwell was sin-binned for a tip tackle on Shane Daly. Munster immediately took advantage, Craig Casey’s superb long pass putting Haley over out wide.

Crowley hit the post with the difficult conversion from the right and Doak was short with a monster penalty attempt.

Ultimately, Munster showed the greater hunger, led by the brilliant Beirne, whose breakdown smarts were a key factor throughout.

Replacement Jack O’Donoghue wriggled through into the 22, Fineen Wycherley was stopped short, but the ball popped back for a well-placed Kendellen to score and Ben Healy converted.

Earlier, Edinburgh moved to the top of the United Rugby Championship table after bagging four first-half tries against Cardiff in a 34-10 win.

The Scottish capital side reach the summit of a combined league table for the first time since the 2009/10 Celtic League season.

The first-half tries came from each of Mike Blair’s starting centres – James Lang and Mark Bennett – and wings Ramiro Moyano and Emiliano Boffelli.

Cardiff played the final quarter with 14 men after both Liam Belcher and James Botham were taken off injured, the latter after a lengthy spell of treatment.

They initially fared better after the stoppage, with Owen Lane breaking away to score their only try, although Bennett added his second of the day late on.

Edinburgh’s previous game was a Challenge Cup win over Saracens four weeks earlier, but they showed no sign of rustiness as they crossed twice inside nine minutes and were deserved winners.

Bonus-point win for Glasgow over Ospreys

In the other game on Saturday, Josh McKay scored his first Glasgow try as the Warriors earned a bonus point against Ospreys with a dominant second-half effort.

Centre Sione Tuipulotu grabbed two tries and wing Cole Forbes also crossed as the Scottish outfit picked up a 38-19 victory over their visitors at Scotstoun.

Dan Evans got the Ospreys’ only try late on, but the Warriors co-captain, hooker Fraser Brown, immediately marked his return from injury by going over late on.