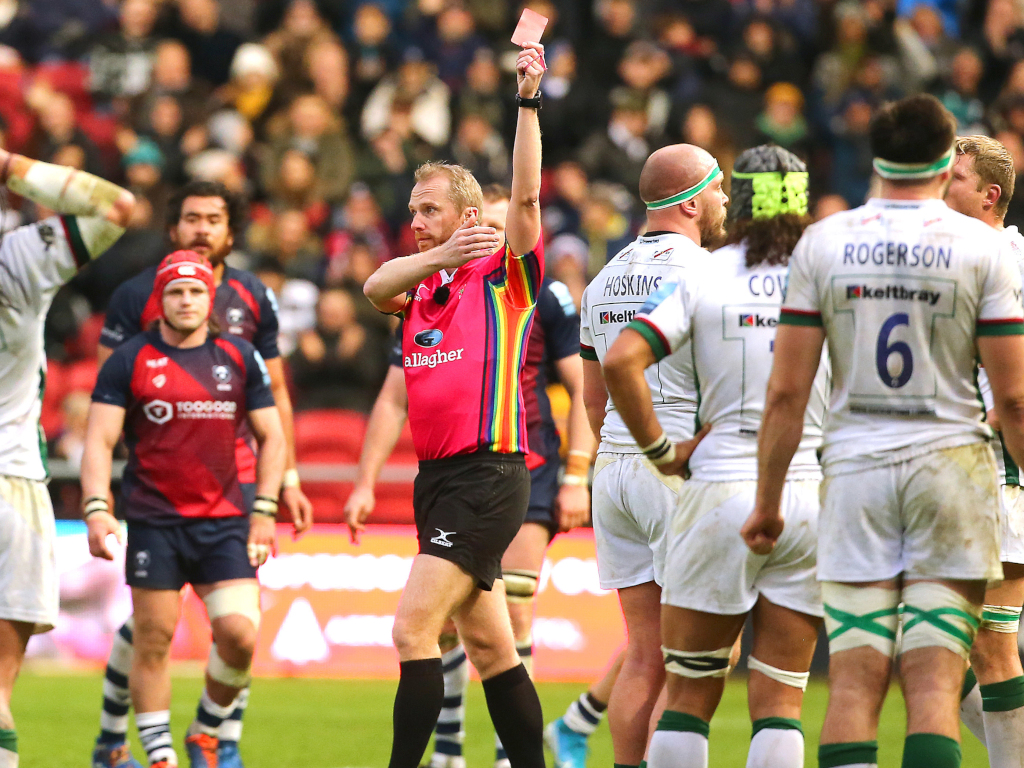 London Irish produced a superb display to rescue a 27-27 draw against Bristol, despite playing over 40 minutes with 14 men after Oli Hoskins was sent-off.

The visitors had just taken a 7-3 lead when Hoskins’ careless shoulder charge into a ruck connected with the head of Bristol lock Chris Vui on the brink of half-time. Replays of the incident were played and referee Wayne Barnes ordered the prop off.

A brilliant run from Piutau was the first notable piece of action. Inside his own 22, the Bristol full-back collected an aimless kick before beating three opponents.

He then raced over halfway before kicking ahead but visiting centre Tom Stephenson beat Toby Fricker to the touchdown.

After 12 minutes the home side suffered a blow when their flanker Dan Thomas departed with a leg injury, with Scottish international Luke Hamilton coming on to replace him.

Beautifully worked across the field and @harry_thacker goes over for a deserved score for the hooker. 🔥

Sheedy had the chance to put the first points on the board in the 21st minute but his 40-metre penalty attempt rebounded back off a post.

Five minutes later, Sheedy succeeded with a simple kick to get the scoreboard moving.

A handling error from Naholo gave the hosts an attacking platform but Irish continued to put in a committed tackling shift to keep their line intact and were rewarded with the opening try.

A neat off-load from centre Terrence Hepetema created space for Curtis Rona before his inside pass sent Meehan over.

Myler converted, with Sheedy making a hash of a penalty attempt before Hoskins was red-carded to leave Irish 7-3 ahead at half-time.

After the interval, it took Bristol only five minutes to break down the 14 men, with Thacker’s burst setting up a try for Hughes.

Sheedy’s conversion hit a post before Myler put Irish back in front with a straightforward penalty but Bristol exploded into life with an excellent try.

Quick handling gave Fricker the chance to fly down the right flank before the supporting Piers O’Conor provided Piutau with an easy run-in.

However, Irish would not lie down, with Naholo intercepting and racing 60 metres to score before Bristol immediately withdrew Sheedy and Hughes.

Bristol looked in serious trouble but another strong burst from Thacker split the defence before a superb run from replacement Holmes, who evaded three tacklers, saw him score.

Bristol then lost prop John Afoa to the sin bin and Irish immediately capitalised when Parton sneaked in at the corner before Bristol looked to have won it with their bonus-point try.

Their star player, Thacker was the scorer but up stepped Myler to hold his nerve and succeed with a 40-metre kick.

What is going on here, @Harlequins? 😅

Meanwhile, in the other game on Sunday, Harlequins edged Gloucester 23-19 at the Twickenham Stoop for their second Premiership victory of the season.

In a topsy-turvy encounter, the Cherry and Whites went into the interval 12-10 ahead thanks to an Ollie Thorley brace, but the hosts were the better team in the second period.

Although the match remained in the balance as Ben Morgan and Alex Dombrandt traded tries, Quins controlled the final quarter and three Marcus Smith penalties proved to be the difference.