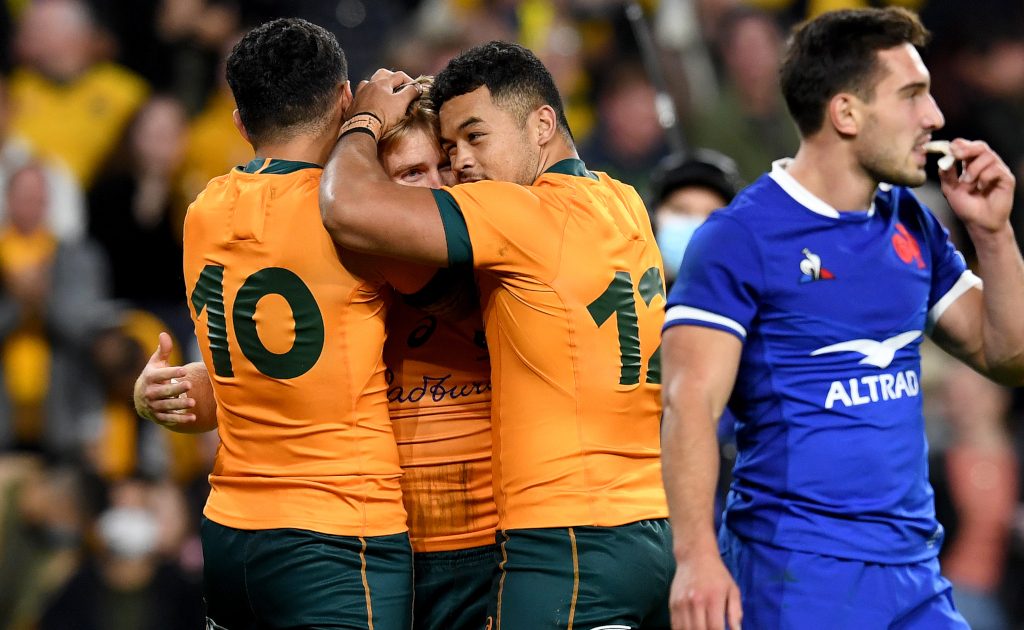 Australia had Marika Koroibete sent off early on but still managed to claim a 33-30 victory over France in Brisbane and win a stunning series 2-1.

Koroibete was red carded for connecting with the head of Anthony Jelonch and it initially had a significant impact on the hosts as Les Bleus moved 10-0 in front thanks to Baptiste Couilloud’s try.

However, the Wallabies responded as half-backs Tate McDermott and Noah Lolesio touched down before Cameron Woki went over for the away team.

The second period was similarly thrilling with Pierre-Louis Barassi and Taniela Tupou trading tries before Lolesio and Melvyn Jaminet added a three-pointer each to keep the match finely poised going into the final 10 minutes.

Australia finished stronger, though, and Lolesio’s 78th minute penalty proved to be enough to spark jubilation among the Wallabies players and fans.

Fabien Galthie’s men have started all three matches impressively and they began this encounter on the front foot. They carried well, with hooker Gaetan Barlot to the fore, and their pressure earned a penalty which Jaminet converted for a 3-0 lead.

The visitors were then boosted further when Koroibete was sent off after connecting with the head of French captain Jelonch.

There did appear to be a dip from Jelonch, which could have mitigated it down to a yellow, but the New Zealand officials deemed that it was worthy of a red card.

The home crowd were angry, particularly at the apparent theatrics of the back-rower, and they were further incensed when the visitors extended their advantage via Couilloud’s close range effort.

To the Wallabies’ credit, they composed themselves and hit back superbly as the inspirational Michael Hooper took an outstanding line. The flanker stepped Antoine Hastoy and then produced an excellent off-load for McDermott to go over unopposed.

Although Jaminet kicked another penalty to take Les Bleus six points ahead, a French mistake inside their own half led to Lolesio intercepting and moving Dave Rennie’s charges ahead.

The fly-half converted and then added another three-pointer for a 17-13 advantage before rangy France back-row Woki reached out to regain his side’s lead.

In a thrilling half of rugby, there would be one more score as Lolesio levelled matters with another successful effort off the tee.

That excitement would continue into the second period as France scored one of the great tries. It was started by Couilloud, who found Teddy Thomas in space. The wing then chipped forward and combined with his scrum-half to provide Hastoy with the opportunity to send Barassi across the whitewash.

It could have been the try to finally break the Australian resistance but, once again, they hit back and were rewarded through Tupou’s effort.

The sides could not be separated going into the final quarter but the Wallabies increased the pressure and thought they had scored through Brandon Paenga-Amosa. However, it was ruled out due to a knock on from Hunter Paisami in the build up.

Rennie’s men would get another opportunity, though, when an ill-disciplined France conceded a penalty, which was converted by Lolesio.

Les Bleus immediately responded through Jaminet but a mistake under the high ball gave Australia a scrum and Lolesio stepped up to win the game for Australia after forcing their opponents to infringe at the set-piece.