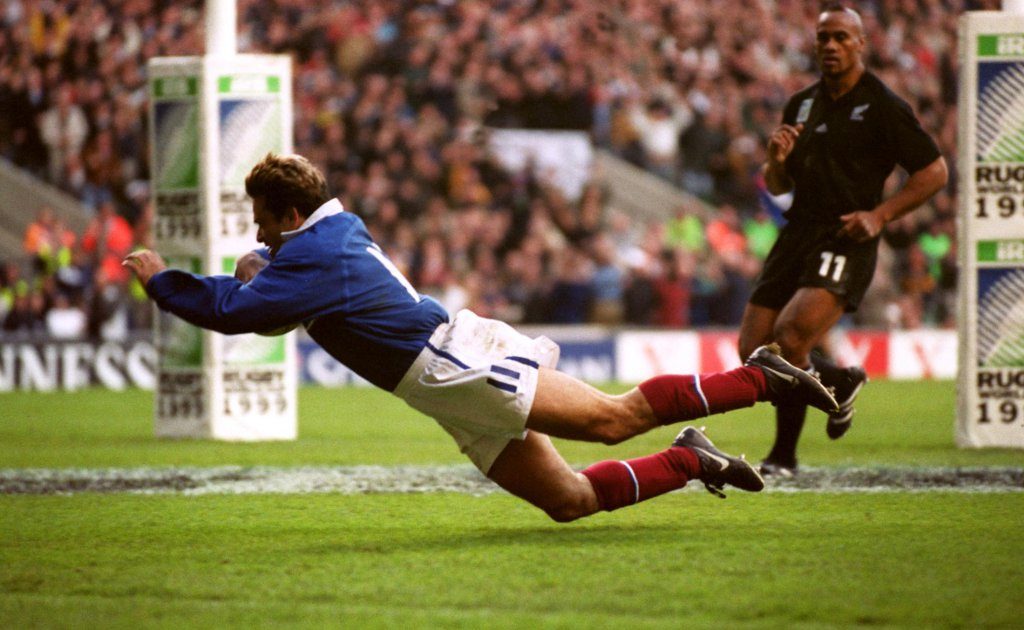 With the festive season in full swing, it’s time to continue our 12 days of rugby. Finally, it’s France’s extraordinary triumph against New Zealand at the 1999 Rugby World Cup in Wales.

Lead-up to that special rugby moment

Although Wales hosted the 1999 World Cup, several of the tournament’s fixtures were played outside that country with England, Ireland, France and Scotland also hosting matches and that is why this semi-final showdown took place at Twickenham.

Like most games they play in, the All Blacks went into this encounter as the favourites to emerge as winners after they cruised through their previous encounters without really being tested.

They secured comfortable victories in their pool matches against Tonga and Italy and sandwiched in between those games was a tricky assignment against England, but they won that clash by a 14-point margin, before also sealing a 30-18 win over Scotland in the quarter-finals. The undoubted star of the show was behemoth wing Jonah Lomu, who crossed for tries in all of those games and had already notched up six five-pointers by the time New Zealand had to face France.

By contrast, Les Bleus had reached the semi-finals with much less fanfare after picking up victories against Fiji, Canada and Namibia in their pool matches before beating Argentina in their quarter-final.

In the semi-final, it was the men in black who came out firing and they raced into a 24-10 lead after 45 minutes thanks largely to the efforts of Lomu, who left several defenders in his wake as he went over for a brace of tries.

France needed a response and that came courtesy of two penalties and two drop goals from Christophe Lamaison which meant they were trailing by just two points after 55 minutes. It was all France during the next five minutes as first Christophe Dominici and then Richard Dourthe scored well-taken tries and the game’s whole complexion had changed with Les Bleus now leading 36-24 by the hour-mark.

Within a 15-minute spell, France had wrestled the initiative away from their more fancied opponents but they were far from done as another five-pointer, from Philippe Bernat-Salles in the 74th minute, sealed a spectacular victory and arguably the greatest comeback in the history of the World Cup.

The All Blacks were visibly shell-shocked as they saw a place in the final go up in flames, and although they struck back with a try from Jeff Wilson during the game’s closing stages, it was too little too late as Les Bleus advanced to the tournament’s showpiece event where they eventually lost to Australia.

Both New Zealand and France are renowned for playing the game with attacking intent and entertaining their spectators in the process but the big difference between the two nations is the inconsistency and unpredictability of the French.

This match is a wonderful illustration of those traits as Les Bleus seemed dead and buried but write them off at your peril as the All Blacks discovered with devastating consequences. France head coach Jean-Claude Skrela deserves plenty of credit for his side’s willingness to take bold risks and they were rewarded for their efforts.

In Lomu, the All Blacks had arguably the best ever match-winner to feature at a World Cup and he showed his worth by scoring his two tries against Les Bleus – an achievement which would make him the tournament’s top try-scorer for the second successive World Cup. His second try – where in the build-up his physicality proved to much for a plethora of defenders – will be shown on World Cup highlights reels for years to come.

Although his performance was brilliant, this match was about its victors with the likes of Lamaison, Dominici and Dourthe leading the way with excellent showings while Bernat-Salles, Fabien Galthie and Olivier Magne also left their stamp on this match with superb attacking performances.

As a spectacle, this encounter had it all. End-to-end action, drama, incredible intensity and a turn-up for the books. Les Bleus were never expected to win but once they had their backs to the wall, they flipped the script during a thrilling 15-minute period which had a massive impact on the end result. The memories from that second half will be everlasting to the players and fans from both sides.