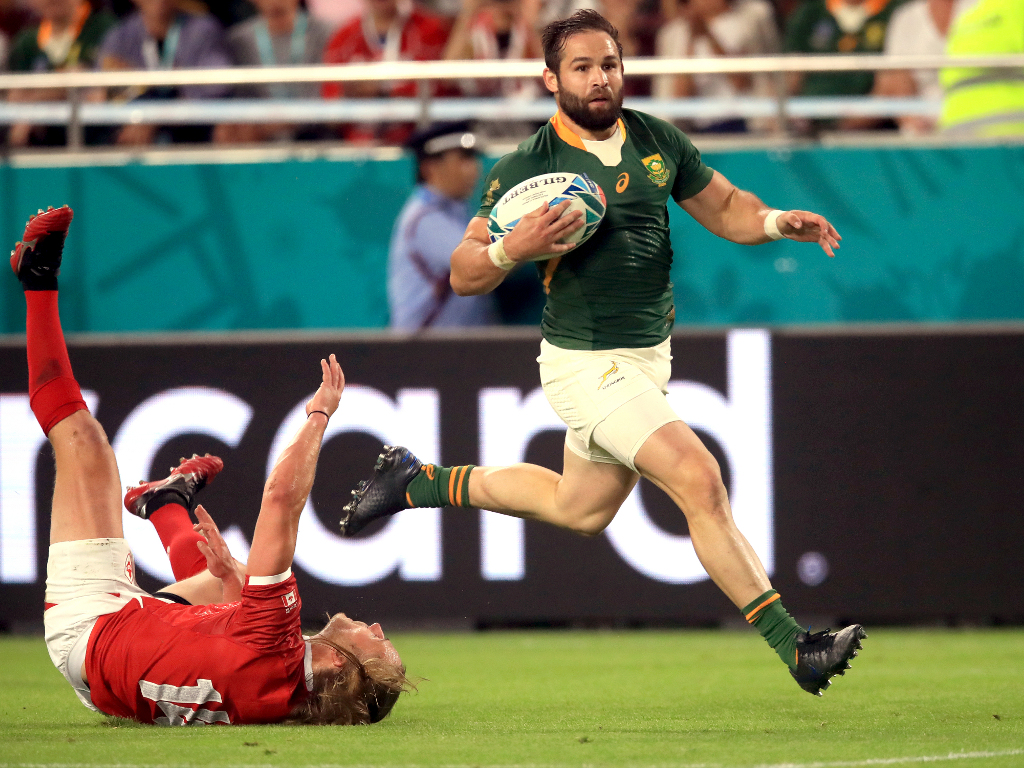 South Africa were in sensational form, running in 10 tries in a 66-7 victory over Canada in their Rugby World Cup encounter in Kobe on Tuesday.

As the scoreline suggests, this was a one-sided affair which was dominated by the Springboks from the kick off and they held a comfortable 47-0 lead at half-time.

The Canucks were second best in all departments and they had to play most of the match with 14 men after Josh Larsen was red carded for a shoulder charge to Thomas du Toit’s neck, while clearing out a ruck in the 36th minute.

Cobus Reinach led the way with a hat-trick of tries for South Africa while Elton Jantjies finished with a 16-point haul after succeeding with eight conversions. Their other points came courtesy of five-pointers from Damian de Allende, S’busiso Nkosi, Warrick Gelant, Frans Steyn, Schalk Brits, Damian Willemse and Frans Malherbe.

For Canada, Matt Heaton scored a try and Peter Nelson added a conversion.

The Springboks made a fantastic start and had their bonus point in the bag inside the opening quarter after early five-pointers from De Allende, Nkosi and Reinach (2).

They opened the scoring as early as the third minute when De Allende crossed the whitewash from close quarters before Nkosi went over in the left-hand corner after gathering a pass from Kwagga Smith deep inside the Canucks’ 22.

And in the 10th minute, Reinach also got his name onto the scoresheet courtesy of a sensational five-pointer. The Bok number nine set off on an attacking run 10 metres inside Canada’s half and tore his opponents’ defence to shreds with a superb line break. He then delivered a perfectly-weighted chip kick which he regathered and had an easy run-in over the try-line.

Five minutes later, Reinach spotted a gap close to the try-line before diving over for his second try and he secured his hat-trick the 21st minute after Jantjies, Gelant and De Allende combined brilliantly in the build-up.

Canada’s defence continued to let them down as Gelant also crossed the whitewash in the 28th minute and Jantjies added the extras which meant South Africa were cruising with the score 40-0 in their favour.

Just before half-time, Canada suffered a major blow when referee Luke Pearce sent Larsen off for an illegal hit on Du Toit and things went from bad to worse for them when Steyn scored the Boks’ seventh try after intercepting a pass from Phil Mack close to the Canucks’ try-line.

The second half started brightly for Canada and shortly after the restart Jeff Hassler put them onto the front-foot with a strong run before being brought to ground deep inside South Africa’s 22. The ball was recycled quickly before Mack offloaded to Heaton, who crossed for his side’s only try in the 46th minute.

10 minutes later, Brits stepped past a couple of defenders before dotting down and there was more joy for the Boks when their inside backs created space for Willemse, who crossed for his first Test try.

And in the 71st minute, Malherbe also got over the whitewash for the first time at Test level which secured an emphatic win for the Springboks and sets them up nicely ahead of the quarter-finals.